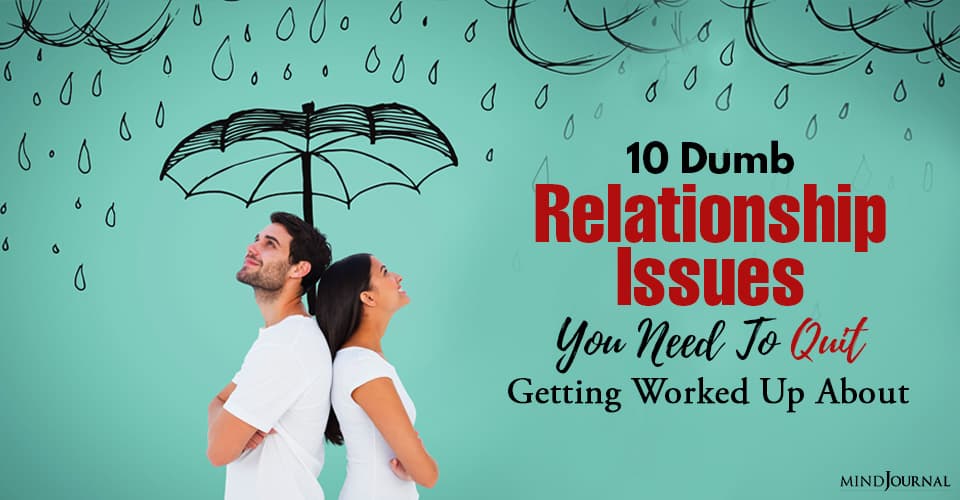 When in a relationship, there might be times when every little thing bothers you, and which then blows up into a huge fight. But if you want a healthy and long-term relationship, you need to pick your fights carefully and try not to bicker about dumb relationship issues that don’t really matter in the long run.

Raise your hand if your spouse does something that drives you totally bonkers.

The wet towel on the floor. The toilet seat left up. The kitchen scissors that never end up back in the drawer.

Still, most of us would agree that putting the empty orange juice container back in the fridge is hardly worth getting ourselves all in a twist.

The mortgage payment mailed late? The milk left out to spoil? Consistent lateness? A bad attitude?

Then again, maybe not.

While there are, of course, serious issues that some couples need to address, most of the everyday tussles I see my clients get into are about, well… a whole lot of dumb stuff.

Stuff they may well find deeply important. Stuff that they’ve fought about for years without ever questioning its relevance.

Stuff that is, nonetheless, a huge waste of time.

I’ll be the first to admit that at least half of these relationship issues have flushed many valuable hours of my life right down the drain. Beyond that, bickering is pointless and only ends up depleting a couple’s goodwill.

In all honesty, I like being right as much as the next person. The problem, however, is that being right comes at a cost. If I’m fiercely attached to being right, then, by default, my husband will end up being wrong. Take my word for it, he doesn’t like that position any more than I do.

It’s been said that we have to choose whether to be right or happy since we cannot be both. A variation on that is to choose between being right or being free — to cling desperately to our need to be superior to others or to learn to let go.

Related: 6 Reasons Why Couples Who Argue Are Actually Happier

2. Caring who started it.

Okay. Chances are if you’re reading this post you’re not in third grade. Who started it counted back then when the instigator got sent to the principal’s office and the innocent got a Kleenex and a pat on the head.

The underlying issue for couples who get snagged on this one is that they believe there’s glory in being innocent. Far better to be the victim than the victimizer, they say.

While the victim position makes it much easier to claim the moral high ground, the truth is that when conflict arises, we’re rarely as innocent as we think.

Wouldn’t it be great if we could playback the video?

I’ve seen couples attempt to recreate conversations they had in 1969, one or both of them insistent that they accurately recall every word.

Sadly, most of us are no better at remembering what we said five minutes ago, especially if we were even slightly revved up.

What does it matter, anyway?

The who said what, when loop is like driving your car while looking in the rear view mirror.

Better idea — say what you think now and leave the past in the past.

Hard as it is to accept, the truth comes in versions. And frustratingly often, when your version and another stands side-by-side, the twain shall not meet.

Short of having a home stenographer record every word the two of you speak, you’re going to just have to accept that nailing down a consensus reality may be difficult, if not impossible.