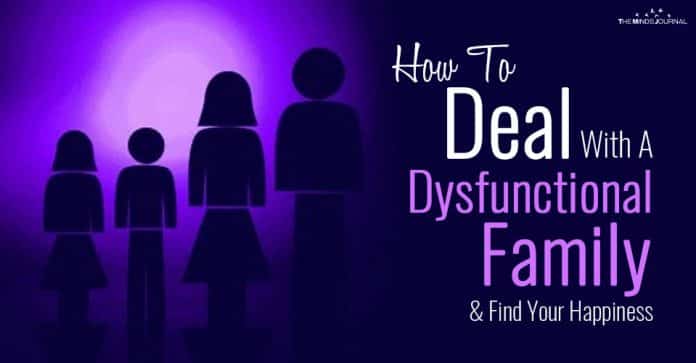 How To Deal With A Dysfunctional Family and Find Your Happiness

Living with a dysfunctional family can be very taxing and it can undoubtedly leave you feeling mentally, emotionally and physically drained.

With growing conflict in the household which may lead to abuse, it becomes imperative that you learn to avoid disagreements, set boundaries and effectively cope with your family. A great place to start is focusing on the well being of your mental and emotional health and standing up for your rights.

“Toxic relationships not only make us unhappy; they corrupt our attitudes and dispositions in ways that undermine our healthier relationships and prevent us from realizing how much better things can be.” — Michael Josephson

The ideal family consists of a group of people we can depend on, people who love us, nurture and care for us, people who offer their guidance and support as we go through life, people who we trust.

Family is the most important influence in the life of a young child. We usually think of family as blood relatives but sadly not all blood relatives have our best interests at heart. Some of the most toxic people we know may share the same DNA.

A dysfunctional family background often leads to a child believing that their opinions, needs, and desires are unimportant and meaningless. As they mature they often lack confidence with low feelings of self-worth. Depression and anxiety are commonplace. Adult children from a narcissistic family need support to make them understand that they are not inadequate and to help them develop healthy self-esteem and build strong and healthy relationships.

In the toxic family neglect and abuse are often a daily occurrence. This family may look good from the outside but it’s a different story for those who live within this dysfunctional family dynamic. Everything is about an image.

The narcissistic parent will likely put on a display in public and be seen as generous, personable and charming whereas behind closed doors they are abusive and controlling.

The house where abuse takes place, whether mental or physical, will never be a home. Talking about their issues is forbidden. (Let’s just pretend everything’s perfect.) Family members who thrive on drama, negativity, jealousy, criticism, and denigration will never make a child feel good about themselves.

Children from narcissistic families rarely grow up to be close to their brothers and sisters in later life. They have often been pitted against one another in their childhood. Unless the child holds the position of the ‘golden child’ within the family unit, they will be seen and not heard, blamed and shamed. Nothing they ever do will be good enough and they’ll soon learn that their value depends on their achievements, how they can make the family look good and not for who they are.

“Family is supposed to be our safe heaven. Very often, it’s the place where we find the deepest heartache.” – Iyanla Vanzant

Signs that you are dealing with toxic family members

How do you deal with a dysfunctional family?

“Some of the most poisonous people come disguised as friends and family.” – Unknown

The worst thing you can do is do nothing. By doing nothing you are giving them the impression that their behavior is ok. Your mental and physical well-being may suffer as a result. Stop giving up a part of yourself to keep the peace and please someone who is impossible to please. Behavior such as the behavior mentioned above will drain you emotionally. Something that I hear so very often is, ‘I wish that I had done something sooner,’ and ‘If only I’d known that this wasn’t normal. I thought all families were like this and I blamed myself.’ For your own sake, establish boundaries sooner rather than later. You teach people how to treat you by setting healthy boundaries.

Your boundaries are a set of limits or rules where you decide what is acceptable and what is not. They’ll differ from person to person. Normal healthy people know not to cross the line and should have a reasonable idea when not to intrude. On the other hand, the narcissist personality will have absolutely no respect for the boundaries you set. They have an extraordinary knack of pushing people to their limits for their own amusement, to create friction or drama or to test you. Setting boundaries with a narcissist will not be a one-off thing. Expect it to be something that you will have to address time and time again. Communicate your wishes firmly and directly and don’t let them push your buttons. Remain resolute and leave them in no doubt that you mean what you say or things will go back to the way they were before.

Healthy boundaries include ‘alone time’ and time to spend as you see fit. Never let anyone make you feel guilty for setting standards. If they get angry with you for setting standards, they’re not giving you the respect that you deserve. They are the ones with the problem, not you.

Without strong boundaries in place (which come from speaking our truth and saying No consistently) we are an easy target to be taken advantage of.
Read more
wpDiscuz
0
0
Would love your thoughts, please comment.x
()
x
| Reply