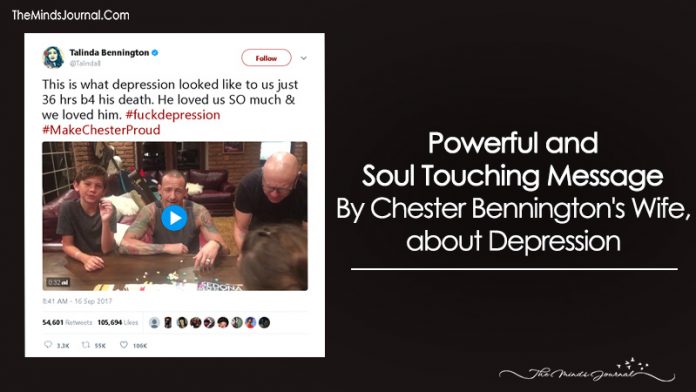 On 16th September, 2017 – 2 months after Chester Hanged himself to death, His wife Talinda tweeted a powerful message for us all. She shared a Video of husband Chester 36 Hours before his suicide.  (Link to Tweet)

This tweet has a huge message for us all, the true face of depression.  Watch Video below

Chester was such a cheerful soul having a wonderful time with his wife and family that nobody could even think that he would be committing suicide. Before flying off to Los Angeles on 19th of July, 36 hours before he embraced death, Chester seemed to love his life.

The video (below) posted by his wife, Talinda Bennington reflects a joyous mood and sends out a powerful message to all of us: depression is invisible.

Who would have known Chester was going to commit suicide? He nurtured depression within himself and never for a single moment one could see him forlorn.

The question is: was he truly enjoying the time he spent with his friends or was he just concealing his depression beneath the smile?

Dear Chester, we all are still perplexed, what kind of turmoil was there inside?

We are forced to ponder on this thought that whether the mood projected by him in the video has been just a blatant lie, an act to fool others and hide his depression or something just triggered and he ended his life.

You see a person having a wonderful time with his peers. He participates actively in group activities, he cracks jokes, he laughs out loud. Do you for a single moment feel that he might be suffering from extreme pain within himself?

Most people think that depression makes a person silent and sad. That’s just one type of depression. People who show these symptoms of depression are most likely to recover quicker than the ones who don’t. Chester Bennington is an example of those who breed so much pain, that they don’t even express them in front of others.

Years ago, Lord Tennyson had actually established the truth of depression in his poem, Home they brought her warrior dead where the nurse said, ‘ She must weep or she will die’ indicating the fact that when a person is not showing any negative reaction to a loss or a trauma, that person is suffering within and that the trauma had hit that person so hard, it will take their life hinting at the apparent case of a suicide.

Chester enjoyed such a wonderful time with his friends even a day before he decided to put an end to his life. Why did he commit suicide? How could he act so lively and be so joyous in front of friends? Apparently, he seemed to have a good time. But now when we look back, we find that this has all been Chester acting to hide his depression because he wanted to die so badly; he wanted nobody to get an inkling of his plan. He was so demoralized that he wanted to leave all of us.

As long as misconceptions about mental illness persist, so too will stigma.
Read more
Depression

5 Ways to Keep Your Relationship Strong When You Are Depressed

Can it be challenging to keep your relationship strong when you are depressed? Absolutely yes! I know because I have been there.
Read more
Depression

How Smartphones and Social Comparison are Making Us Unhappy?

Your smartphone propels social comparison that could be making you miserable and is causing the rise of mental health problems in young Americans.
Read more
wpDiscuz
0
0
Would love your thoughts, please comment.x
()
x
| Reply