Building a Happy Relationship Starts with You and not your partner 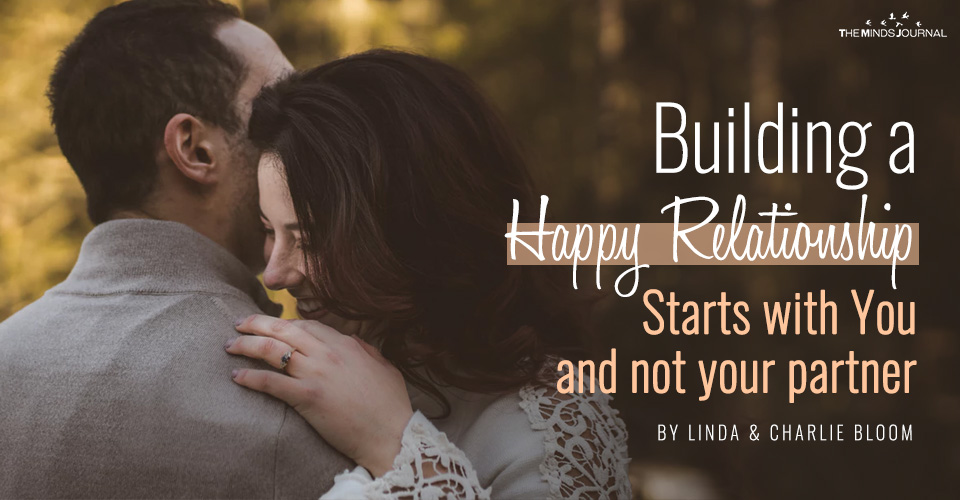 Creating a happy relationship starts with you and not your partner. Look deep inside yourself and identify exactly what YOU need to do to make things better with your partner.

Linda: Confused. Conflicted. Mixed feelings. These are terms that are used to describe the feeling of an inner conflict between two perspectives that are at odds with each other. In some cases, the conflict shows up between two people. In others, it occurs within the experience of one person. When an inner conflict isn’t adequately addressed at the source, it will often manifest itself as a relationship problem.

The recognition that the root of an unresolved interpersonal issue may be an intrapersonal conflict can minimize or even prevent relational struggle and distress. The reason that so many couples’ arguments become entrenched and unresolved is that they are dealing with a proxy rather than facing the person with whom the real difference of opinion lies. Just as “you can never get enough of what you really don’t want”, you also can never resolve an argument with someone who does not have the authority to address the real issue. That would be yourself. If this seems a bit abstract for you, consider the example of this couple.

Kit and Jessica dated in high school and married when they were 21 and 19, respectively. When they were each in their mid-thirties, Kit decided to go to college and get a degree. Jessica thought that that might be a good idea for her do as well, and she decided to do just that. They both enrolled in a local state college and things went fine until as they were reaching the end of the first semester and facing the pressure of final exams, tensions between them started to build and they began experiencing increasingly frequent meltdowns with each other.

Kit’s preferred way of dealing with stress is to take some downtime to cool down and relax. Jessica’s is to ramp up her efforts and buckle down. Their respective strategies ran headlong into each other. They kept repeating the same argument over and over again, each of them trying to coerce the other to join them in their style of stress management, with Jessica pushing Kit to study when she did, and Kit aggressively resisting. Kit made an effort to accommodate Jessica’s style by trying to join her in her desire for them to agree upon designated “study hours” that they both would observe together. Despite the adjustments they both made in creating this new system, tensions between them not only did not diminish, but they increased.

The more Kit tried to accommodate Jessica, the more resentment he felt because he was neglecting himself by failing to provide himself with the kind of downtime that he needed to recharge his battery. Believing that if he could just provide enough attention and time to their agreed-upon study structure, things would turn around. But they didn’t.

Read How Happy and Healthy Is Your Relationship? Quiz

In fact, the frustration level for them both just increased. Jessica didn’t trust that without the pressure of their agreed-upon structure, Kit would have the self-discipline to get his studies handled and that he would end up quitting college again. Consequently, she found it hard to stop reminding Kit to stay on track. It was a classic case of gridlock. Eventually, the inevitable blow-up came when Kit let loose one day and yelled at Jessica to “get off my back!”.

Shaken by her husband’s outburst, Jessica managed to resist the temptation to counter Kit’s anger with her own and instead responded by stating that she didn’t realize that what she was intending to be supportive to him, he was experiencing as nagging and harassment.

“Well, that’s how it feels when you’re constantly checking up on me, trying to make sure that I’m doing what you think I’m supposed to be doing. Why do we always have to do things your way? I’m sick of always trying to please you! It’s never enough!”

There was a long pause before Jessica responded.

“Are you done? Is there anything else that you want to tell me?”

“That’s for you to decide. Are you sure that you’ve done because if you are there are a couple of things that I’d like to tell you.”

First of all, thank you. (pause). Thank you for telling me that this wasn’t working for you. I’ve kind of felt that you were not altogether okay with our new system, even though you had agreed to try it out. So thanks for being honest and letting me know what was going on with you. I feel like now we can maybe readjust the system or even throw it out and try something different.

I’d rather know the truth about how things are going for you even if it means having to make some changes or dealing with some uncomfortable feelings. To tell the truth, even though this system makes sense rationally, it doesn’t work so great for me either. I don’t like being in a position where I feel responsible for seeing to it that you honor your end of our agreement. It’s all I can do to manage my own part in holding things up.”

Kit: “But I never asked you to manage me, and I resent it when you do.”

Jessica: “Yes, I know you never asked me to take on that role. I’m not blaming you for doing it. I admit that I take it on whenever I get scared that you’re not going to handle things (in my opinion) correctly.”

Kit: “Well that must be pretty often because we seem to find ourselves in this pattern a lot of the time”.

Jessica: “(Sighing) I guess I have pretty high expectations of you and of myself too. I hate feeling scared and anxious when things look like they’re not going according to plan, my plan usually”.

Kit: (pause, then quietly) “That’s good to hear. Thanks for admitting that. Sometimes I feel like I’m the only one with whom you’re disappointed and mistrusting. So I make an effort to accommodate you so that you won’t get angry or upset. “

Jessica: “And you end up feeling frustrated and angry yourself because sometimes I’m very hard to please.”

Jessica: “And sometimes, you have to admit, you do give me a reason to not trust that you’re going to keep your word and follow through with your promises.”

Jessica: “Do you think it would help if I worked on backing off more instead of monitoring you so closely?”

Kit: “Well that’s a big ‘Duh!” Do you think it would help if I were more consistent in keeping my word and actually doing the things that I promised to do in the time frame that I committed to?”

Jessica: “What a concept! Is that even possible?”

Kit: “Don’t get sarcastic now. You were doing pretty good.”

Jessica: “Sorry. I couldn’t resist it.”