How To Become a Person Who Will Always Be Remembered 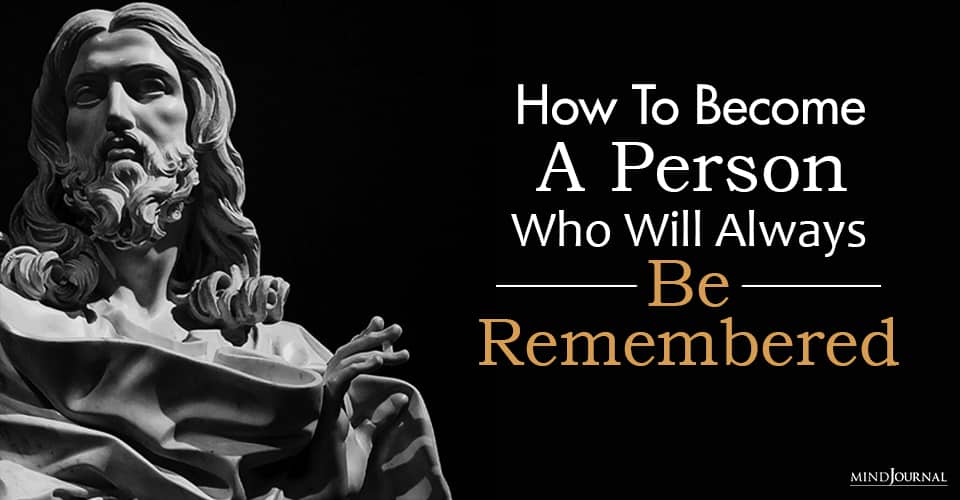 Develop These Two-Character Traits to Become a Person Who Will Always Be Remembered. Confidence and Curiosity: these are the main attributes that can make you unforgettable and create a long-lasting impression.

Having a decent conversation with another person is becoming increasingly difficult. It’s much easier to talk and to express one’s opinion more than ever, but it’s now far harder to converse. We need not look beyond our political climate to know this. It’s not so much that we can’t talk about politics, because everyone is more than happy to share their opinion. It’s rather that we can’t converse since we don’t tend to listen.

In her book, You’re Not Listening: What You’re Missing and Why It Matters, journalist Kate Murphy recounts the story of a bi-partisan conversation. In this meeting, the moderator attempted to facilitate conversation by the use of a talking stick. What ended up happening? Someone threw the stick at someone else.

The worst thing about this is probably not that it happened, but that we’re all not that surprised that it did.

To Sell Is Human

In his book, To Sell is Human, Daniel Pink posits that the majority of Westerners spend the majority of their time at work and in life, in sales. It may not be convincing someone to buy a car or a photocopier, but in some way, most of us are trying to convince somebody to do something. We are constantly trying to convince our children, partners, clients, and colleagues.

Right now, I am trying to sell you the idea that listening is one of the greatest and most necessary skills for true success. Why? Because great salespeople, and therefore great people, listen.

Related: How To Keep a Conversation Going? The Art Of Listening For Hooks

Take for example the classic story of the origin of the Betty Crocker cake mix. All one needed to bake a cake was to add water to the mix and throw it in the oven. You would think it’d sell like hotcakes, but it didn’t.

As it turns out, people felt guilty about using it. It was too easy. So General Mills listened, took that information, and required the mix to need real eggs. What happened? Sales soared.

How can we become better listeners?

Why is selling and listening so hard today? Because we are slowly (or rather rapidly), losing two qualities: Confidence and Curiosity.

In her book, Murphy suggests that insecure people can’t or don’t like to listen. She writes, “Confident people don’t get riled by opinions different from their own, nor do they spew bile online by way of refutation. Secure people don’t decide others are irredeemably stupid or malicious without knowing who they are as individuals.”

But isn’t that what most people do? If we’re being honest, isn’t that what we do? Isn’t the reason why we can’t talk about politics or religion because we aren’t confident and secure in our own beliefs and self? Or maybe we are afraid that the person we are talking to will throw a talking stick at our head.

In their book, The Coddling of the American Mind, Lukianoff, and Haidt, recount story after story of college students associating challenged beliefs to physical harm. More and more, young people are associating if not equating having their beliefs challenged to being physically harmed. Consequently, students have reacted in physical violence towards people/groups that have peacefully met because they did not like what they heard.

Ryan Lui is a high-performance coach who helps business leaders raise their performance so they can reach their goals. He understands that worthy goals require work and a high-performing person. Therefore, he helps people increase their focus, move forward, and go faster towards fulfilling their great and good goals. Ryan resides in the beautiful Pacific NorthWest. He loves black coffee in the morning, riding his bike through the city, and talking to people about their personality type. Connect with him at ryanlui.com.View Author posts