Attention Seeking Behavior In Adults: Common Reasons And How To Deal 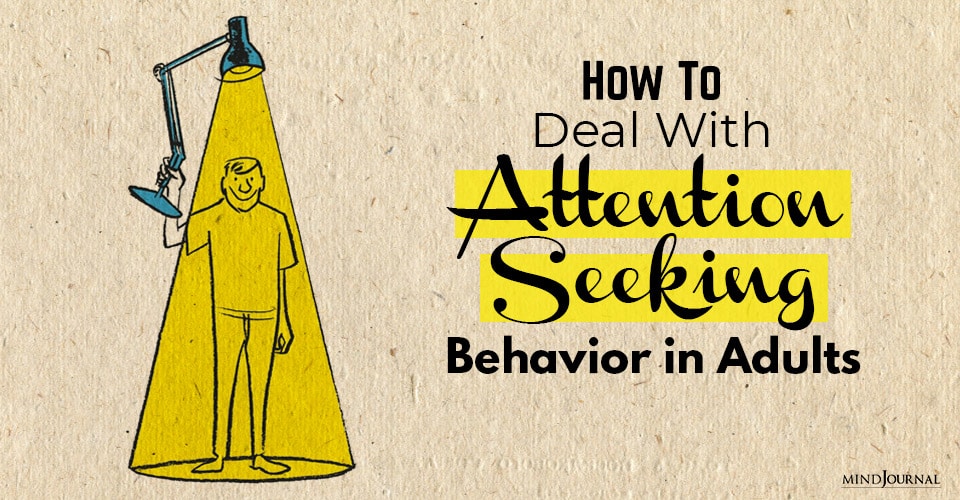 “Contentment is the greatest weapon against the fever of chronic recognition, let us wield it.”

We come across attention seekers quite often. They come with a reservoir of drama and conflict. But it has become imperative, in this day and age, to understand the psychology of these attention seekers. We need to identify their motivations, the underlying driving force that persuades them to act that way. For that, we need to dive deep into the very subconscious mind of these people and bring out the hidden contributing factors.

So what exactly is Attention Seeking Behavior?

It is defined as the act of seeking recognition and the subconscious attempt of becoming the center of attraction in social gatherings.

Let us now look at the psychology behind attention seeking behavior in adults.

Suppose you’re having a seemingly decent conversation with one of them. As of yet, you don’t know whether the person you’re interacting with is an attention seeker or not. All of a sudden, you find them burst with emotions. It can be excitement, anger, or a sense of immense disturbance.

You start wondering what could have possibly gone wrong. If you could find no practical reason, know this, that he/she is an attention seeker. It is characteristic of every attention seeker to come up with emotional outbursts for no reason at all. It is usually referred to as Histrionic Personality Disorder.

Related: What Is Histrionic Personality Disorder and How To Manage This Intense Need for Attention

But it doesn’t stop there. They’ll behave as if they’re victims of emotional exploitation. Though you’ve done absolutely nothing to cause the trauma, they, however, like to play the blame game.

You’ll start feeling uncomfortable, but that won’t deter them from continuing their drama. They have absolutely no regard for social order and peace and would leave no stone unturned in playing a poor victim who has been traumatized by the person they’re interacting with. All this for a speck of attention.

Sometimes, people become so close to you that you cannot think of a day without having to meet or talk to them. And if that someone happens to be an attention seeker, you’re in for some serious drama.

You’ll find them forcibly inserting themselves into your daily routine. Not only that, they’ll make sure that you end up texting or calling them as many times as possible. Subconsciously, they want you to be totally dependent on them. They want to be your messiah in your times of need. They’ll try to gain a position, where you’ll end up begging for help in tough times.

This is how, they’ll gain an upper hand on you, thus making you their emotional slave.

4. Pretending to be ill.

This is one of the best psychological tricks employed by an attention seeker. You’ll find them claiming to be ill, even when they are at the peak of their health. It is much like a madman claiming the weather to be cloudy even if it’s a bright sunny day.

They act this way to gain sympathy. So that people start to take out some time and give all of their attention to them. Attention seekers are very good at acting. They’ll never let you see their real face. You’ll never know if that person is really ill, or just pretending to be. The main goal here is to get sympathetic attention from the close ones, and if possible, from strangers as well.

As mentioned earlier, attention seekers behave as if the world revolves around them. But sometimes, they’ll also use means that are far less direct than the ones they normally employ. One of the best ways is to act busy.

Yes, this is a passive way that transmits signals conveying that they’re important as a professional and have no time for people. This is done so that people start to admire their hard work and frequently connect with them as if they’re very important figures in society. Showing people that you’re engaged and seldom have spare time indirectly lures people, as they start believing in your false status and start being around you to get even a molecule of attention.

Common Reasons Behind Such Behaviors

We live in an era of social media. A time when the digital platform is booming at an exponential rate. The social media revolution has brought about tremendous changes in the mindset of people.

Since social media platforms generate the feeling of recognition and fame, it automatically develops the desire for attention. Chronic usage can turn a person from a social animal to a voracious seeker for attention.