6 Signs He Is Incapable Of Love 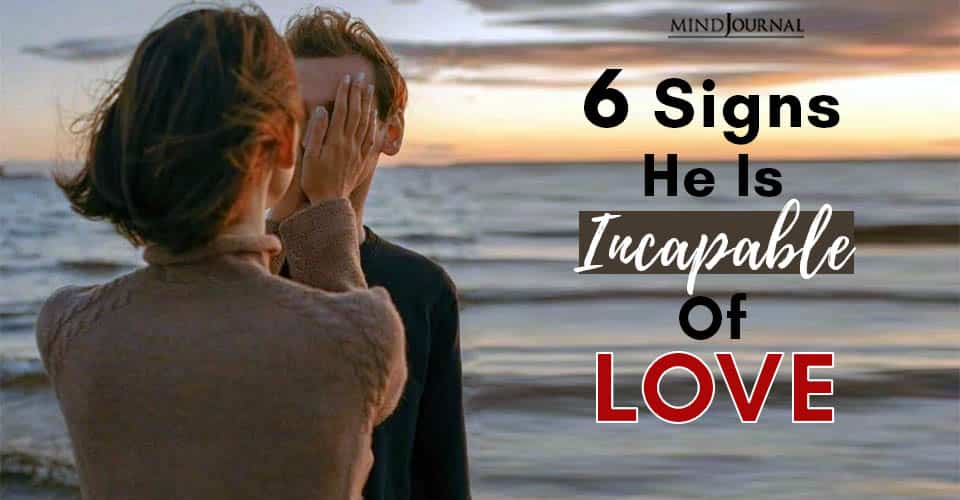 A man like this is poisonous and will destroy you and your life. How can you be with someone who will not even treat you with an ounce of respect? Relationships are meant to help you grow and give you happiness, not destroy you emotionally.

5. He is never accountable for his repulsive actions.

Even when it is clearly his fault, somehow you will always end up apologizing because he might get so sad or fly into such a rage, that you will have no other option. He will make you feel that you are making a big deal out of it, and you should just forget what he did and basically force yourself to be fine with his never-ending toxicity.

Similarly, while talking about his past relationships, it will always be his exes’ fault as to why it never worked out. Their fault was that he was “forced” to sleep with some other girl, they stopped glamming-up for him and let themselves go, or tested his limits so much that he just couldn’t stop but hit them. Chances are if he murdered someone for not satisfying his ego, it won’t be his fault, it will be someone else’s.

6. He will tell you that he will treat you badly.

Yes, there are men who will tell you on your face that they will treat you badly because they don’t know how to love someone else other than themselves. When a man tells you he is going to be a douche, always believe him. You might have the urge and confidence in yourself that you will be able to love him and fix him, but don’t even try; you will just be wasting your time and opening the doors to a world of pain.

If he tells you he is incapable of love, is not looking for a relationship, or anything that suggests he is not going to be invested in you then take him seriously and just let him go. It might hurt in the beginning, but it will be the best thing for you in the long run.

Women have a tendency to take the blame on themselves. Oftentimes, you might think that you were being clingy and demanding and it’s your fault he is behaving in such a horrible manner, instead of accepting that the man you are with is just incapable of affection or love. A relationship that is so manipulative, one-sided, and emotionally-depreciating is only going to hurt you. So, don’t give him that power anymore and leave before you completely lose yourself.