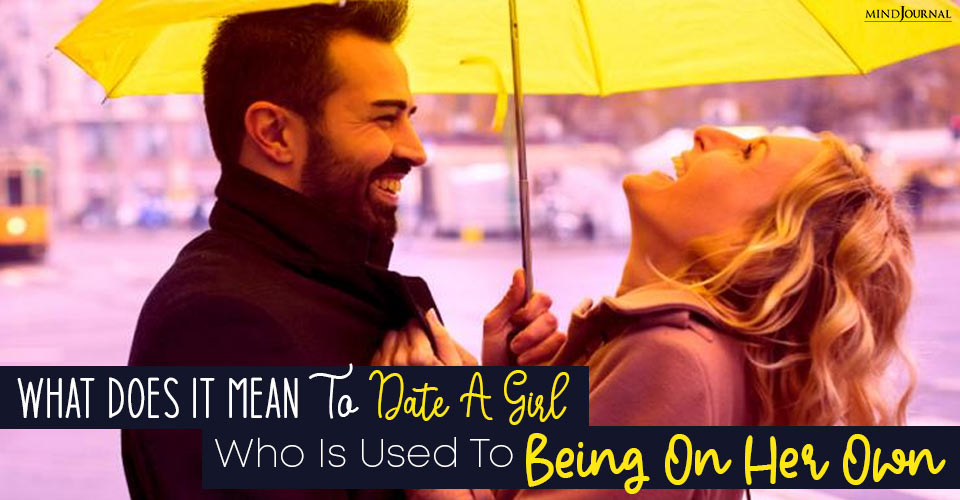 An independent girl is unlike any other girl that you have ever been in a relationship with. She might behave in ways you are not accustomed to witnessing from other girls you might have dated. Dating a girl used to being on her own is one of the best decisions you will ever make in your life.

Remember, a girl who is used to being on her own is a bit different from other girls but that does not make her any less loyal, dedicated or genuine in nature.

These are 14 things a man should remember about dating a self reliant girl (coming from a girl used to being on her own).

Related: 11 Things You Must Know About Loving a Strong, Powerful Woman

1. She will not ask for your help that often. She likes to get her own work done and on her own terms. This does not mean that she is arrogant in nature. She is just headstrong.

2. When you are dating an independent girl, or you’re in a relationship with one, you’ll notice that she likes to make slower moves. It does not mean she is not interested in you. She just wants to make sure that she is going in the right direction. Years of being self-dependent made her measure every step she took for herself.

3. Her friends might act weird and suspicious of your intent because getting to hear about you dating someone is something totally out of the blue for them. They might take time to gel with you. Actually, it has always been them, only them, being there for her when she needed someone.

4. It will be a bit difficult for her to accept help from you. She has been by herself so long, taking care of herself, and protecting herself that she will need time to hand over that responsibility to someone else. Do not take this personally. With time she will be more accustomed to letting you do things for her and also appreciate your effort.

5. Being with a girl who is used to being on her own, you will see that she will be a bit hard to persuade. She is very confident, and will not easily give up on her ideas and values against logic and reason. Be patient with her. It is a result of her self-protective mode.

Related: Why A Strong, Independent Woman Is The Best Girlfriend You’ll Ever Have

6. One of the most important things to remember while dating a girl used to being on her own is that she needs time by herself. Especially when you start seeing each other. She needs to compose herself, and soothe herself of the overwhelming emotions she is experiencing, right as she is falling head over heels in love with you.

7. She might randomly pull away from you, avoiding and ignoring you but that does not mean that she is uninterested in you. She will come back once she needs you.

9. Expect yourself to be free of most responsibilities because she is great at drawing her own path and solving her own problems. You will often hear “I have already got this done.”

10. She might seem a bit guarded. She might take time to divulge intimate details about her life. But the key to dating a self reliant girl and opening her up is being patient with her, and understanding her mindset.