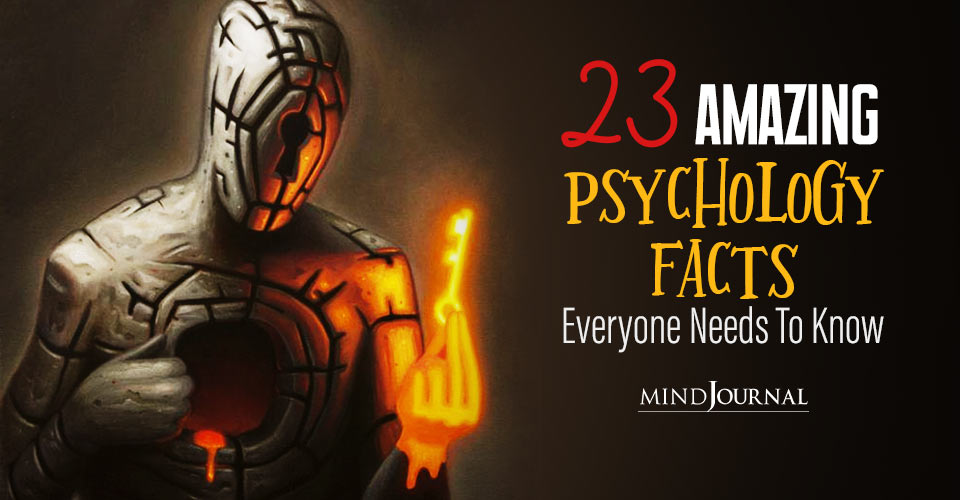 Ever since I was a child, human psychology has fascinated me. A lot of it seems like common sense, but when you really dive into the human psyche, things become extremely complex.

Below is a list of 23 incredible psychology facts that everyone absolutely needs to know.

1. Chocolate discharges the same chemical in your body as when you feel love.

When you eat chocolate, it releases several neurotransmitters in your brain that have a positive effect on human feelings.

One of the main neurotransmitters released is phenylethylamine, which causes alertness, and excitement quickens the pulse rate, and makes you happy! It is often referred to as “the love drug” because it arouses feelings similar to those that occur when someone is in love.

Related: Chocolate Can Make You Smarter, Proves a 40-year Study

2. A 20-second hug releases chemicals in the body that help you trust the one you’re hugging.

Oxytocin is released in the body when a person considers themselves to be secure, safe, and connected to their loved ones. Through the release of this chemical, the brain knows that everything is safe and that there is no need to worry. (source)

3. We’re only capable of being close with about 150 people.

Dunbar’s number is a suggested cognitive limit to the number of people with whom one can maintain stable social relationships. Relationships in which an individual knows who each person is and how each person relates to every other person.

This number was first proposed in the 1990s by British anthropologist Robin Dunbar, who found a correlation between primate brain size and average social group size. (source)

4. Your brain is more creative when it’s tired.

If you’re trying to do creative work, you’ll actually have more luck when you’re more tired and your brain isn’t functioning as efficiently.

This sounds crazy, but it actually makes sense when you look at the reasoning behind it. It’s one of the reasons why great ideas often happen in the shower after a long day of work. (source)

Related: 25 Amazing Psychology Facts You Didn’t Know About Yourself

5. The brain feels rejection as pain.

We all know that rejection hurts, but neuroscience has concluded that it does in fact, literally, hurt.

While the brain does not process emotional pain and physical pain identically, the reaction and cascading events are very similar, and the same natural chemical is released during both events. (source)

New research shows that we humans aren’t as good as we think we are at doing several things at once. But it also highlights a human skill that gave us an evolutionary edge. (source)

7. 80% of conversations are gossiping.

It is often dismissed as mere tittle-tattle. But gossip is at the very core of being human, scientists believe.

Dr. Nicholas Emler says that the swapping of juicy bits of information is fundamental to being human and separates us from the rest of the animal kingdom. (source)

8. Relationships are more important for your health than exercise.

University of North Carolina at Chapel Hill researchers found that the size and quality of a person’s social ties affect specific health measures, such as abdominal obesity and hypertension, at different points in their lives. (source)

Related: 30 Amazing Psychology Facts About Love That You Will Really Love

9. No blind person has ever developed schizophrenia.

Pretty interesting psychology fact right? Across all past papers, there has not been even one reported case of a congenitally blind person who developed schizophrenia. (source)

10. Your favorite song is likely associated with an emotional event.

You and everyone else. (source)

This one seems kind of obvious! A study at the University of Groningen showed that music has a dramatic impact on your perception. (source)

12. The more you spend on others, the happier you are.

According to various studies. Be sure to give plenty this holiday season! (source)

13. Spending money on experience instead of stuff also makes you happier.

14. Kids are more high-strung today than the average psych ward patient in 1950.

Which is pretty scary but not surprising. About half the human population now suffers anxiety, depression, or a sort of substance abuse. (source)

“The American Psychiatric Publishing Textbook of Mood Disorders” shows that people who engage in meditation and prayer religiously are less stressed out. (source)

For the average American, $75k a year buys happiness. It liberates you from poverty and gets you what you need in life. (source)

17. Being with happy people makes you happier.

This amazing psychology fact should come as no surprise. (source)

Family, education, and work, can all be pretty stressful. (source)

19. Convincing yourself you slept well tricks your brain into thinking it did.

21. When you remember a past event, you’re actually remembering the last time you remembered it.

Alright, this is one of those amazing psychology facts that blew the hell out of my mind. This is why our memories fade and distort over time. (source)

22. Your decisions are more rational when thought in another language.

A university of Chicago study showed that Korean citizens who thought in foreign languages reduced their overall bias. Neat. (source)

Related: 25 Interesting Psychology Facts That Will Blow Your Mind

23. If you announce your goals, you’re less likely to succeed.

It’s true. Tests since the 1930s have pretty well proven it. (source)

12 thoughts on “23 Amazing Psychology Facts Everyone Needs To Know”