15+ Native American Quotes and Sayings On Wisdom, Love, And Respect 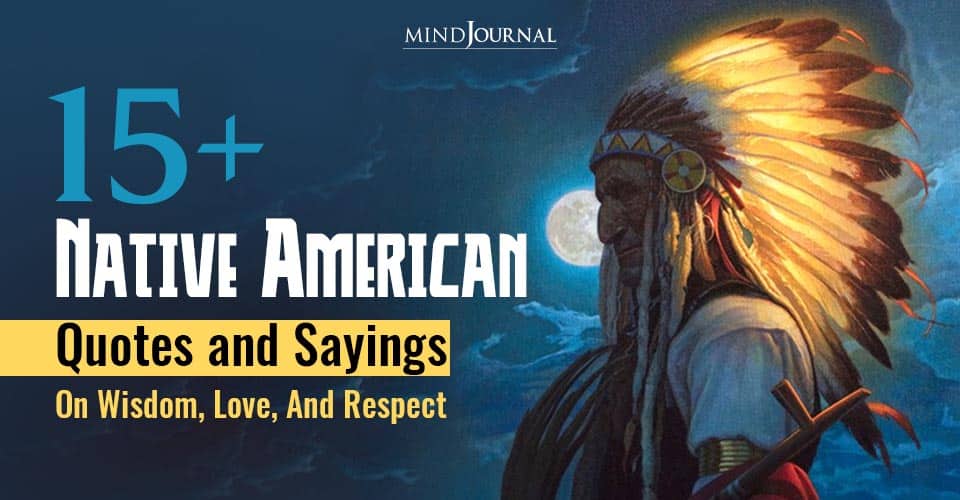 Native Americans have always had a rich culture, which is apparent in their teachings, wisdom, and quotes, which are inspiring even in the 21st century.

Prior to the arrival of Europeans in America, there were estimated to be 1.2 to 12 million Native Americans living in the Americas. That population quickly dwindled to 250,000 via disease, suicide, genocide, slavery, and mass murder. This was an incredibly great tragedy and maybe one of the most terrible things to ever happen to any group of people in the history of our planet. However, almost 0 attention is given to this tragedy. One has to ask, why?

In this tragedy, not only lives were lost, but almost all Native American traditions, spirituality, and customs were killed along with the people. Could this have been a reason for the genocide?

They were in tune with Mother Nature and are often called the Keepers of the Earth. They wanted to “walk lightly upon the Earth and live in balance and harmony.” Perhaps if more Native Americans were alive today, our planet wouldn’t be facing so much turmoil.

Everyone can benefit from adopting so many of the ancient spiritual teachings of the Native American elders.

Here Are The Best Native American Quotes and Sayings On Wisdom, Love, And Respect

1. “When we show our respect for other living things, they respond with respect for us.” – Arapaho

2. “The Great Spirit is in all things: he is in the air we breathe. The Great Spirit is our Father, but the Earth is our Mother. She nourishes us; that which we put into the ground she returns to us.” – Big Thunder (Bedagi) Wabanaki Algonquin

3. “The first piece, which is the most important, is that which comes within the souls of people when they realize their relationship, their oneness with the Universe and all its powers and when they realize that at the center of the Universe dwells the Great Spirit and that this center is really everywhere, it is within each of us.” – Black Elk – Oglala Sioux

4. “Only when the last tree has died and the last river has been poisoned and the last fish been caught will we realize we cannot eat money.” – Cree Indian Proverb

When you are in doubt, be still, and wait;
When doubt no longer exists for you then go forward with courage.
So long as mists envelop you, be still;
Be still until the sunlight pours through and dispels the mists
As it surely will.
Then act with courage. – Ponca Chief White Eagle

6. “You can’t wake a person who is pretending to be asleep.” – Navajo

8. “Humankind has not woven the web of life. We are but one thread within it. Whatever we do to the web, we do to ourselves. All things are bound together. All things connect.” –Chief Seattle

9. “When you were born, you cried and the world rejoiced. Live your life so that when you die, the world cries and you rejoice.” – Cherokee

10. May the stars carry your sadness away,
May the flowers fill your heart with beauty,
May hope forever wipe away your tears.
And above all, may silence make you strong. – Chief Dan George

11. “Before our white brothers arrived to make us civilized men, we didn’t have any kind of prison. Because of this, we had no delinquents. Without a prison, there can be no delinquents. We had no locks nor keys and therefore, among us there were no thieves. When someone was so poor that he couldn’t afford a horse, a tent, or a blanket, he would, in that case, receive it all as a gift. We were too uncivilized to give great importance to civilized property. We didn’t know any kind of money and consequently, the value of a human being was not determined by his wealth. We had no written laws laid down, no lawyers, no politicians, therefore we were not able to cheat and swindle one another. We were really in bad shape before the white men arrived and I don’t know how to explain how we were able to manage these fundamental things that (so they tell us) are so necessary for a civilized society.” – John (Fire) Lame Deer Sioux Lakota