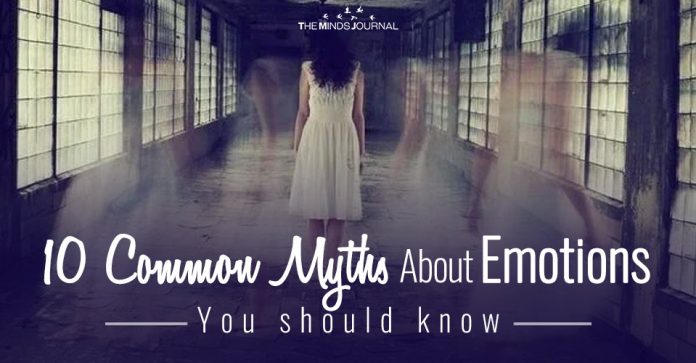 10 Common Myths About Emotions You should know

When it comes to the vast spectrum of human emotions, there are a lot of common myths about it. Do you know what they are?

The philosopher Nietzsche once said that we are often most clueless about what is closest to us. Nothing is closer to us than our own emotions, but still, we do not understand them. Emotions are what makes us human, and if we do not have a clear idea about them, then how can we feel them at their fullest?

Here Are The 10 Common Myths About Emotions

Emotions are forms of judgment. A person’s emotional experience typically results from a subjective interpretation (appraisal) of an event rather than the event itself, even though the appraisal (beliefs) involved may not be accurate.

Different individuals can interpret the same event differently. For example, grief about someone’s death represents a judgment about that person’s importance to the person. For a joke to be funny, it has to be perceived as such by someone. When there is no appraisal, there is no emotion. The appraisal is like discovering the black box of a plane crash that recorded flight data just before the crash.

Without a “psychological autopsy” into someone’s interpretation, we are in the dark. Cognitive therapy is based on the idea that much of the emotional pain is caused by distorted (irrational) thinking.

Do you sometimes find it challenging to understand your emotions? Read How to Understand your Emotions Better and Be More in Touch with Them

2. Emotions are incapable of being expressed in words

It is true that our language is not developed for “inner experience.” But it does not believe that emotions are indescribable.

As noted above, emotions are judgment. That is, they are describable and analyzable in considerable detail. Parents and teachers frequently ask young children to “use their words” when they are upset and emotional. Research shows that describing anger and fear would be helpful for self-control.

Neuroscientist Damasio writes that feelings are a bodily experience provoked by an emotional response. Feelings require some element of awareness. In other words, they register in consciousness and they are not merely intellectual (like thinking).

If we were to think of an emotion as a simple bodily feeling, there would be no obvious role for reflection. We can tolerate the feeling like an itch or a headache, or diminish it with booze. What we feel is just a small piece of the picture.

As the name suggests, if emotions are denied expression, they will leak somewhere else. And we need to express our emotions to feel better. For example, we often talk about anger in terms of “heating up,” “simmering,” and “boiling over.” The metaphor represents passivity, against the view that emotions can be cultivated, and educated.

Research in emotion regulation has shown that there are a variety of ways that inappropriate emotional reactions and experiences can be disrupted by making use of our human ability: reinterpretation and distraction. For example, we often use humor to block anger or use fear to resolve the tension.

Do you sometimes have difficulty expressing your emotions? Read 15 Art Therapy Exercises to Control Your Mind and Channel Your Emotions

5. I know exactly what you did to upset me

People are often mistaken about their own emotions. They misread and misname their emotions. And, of course, they misread other people’s emotions, particularly when their perception is colored by their own personal preferences or prejudices. For example, consider the emotionally complex situation of divorce. Experts note that husbands’ reactions are often dominated by anger, an emotion that allows them to maintain a confident and dominant position.

A therapeutic goal in these situations is to help them recognize that some of their negative effects may come from sadness, hurt feelings, and fear, emotions that are more painful and scary and that husbands may be especially motivated to avoid. Misattributions usually disappear when people are made aware of the true source of their affective states.

Neuroscientists claim that running changes our brain and affects how we think and what we feel. Science confirms that running every day for 30 minutes is enough to reap amazing brain benefits.
Read more
wpDiscuz
7
0
Would love your thoughts, please comment.x
()
x
| Reply