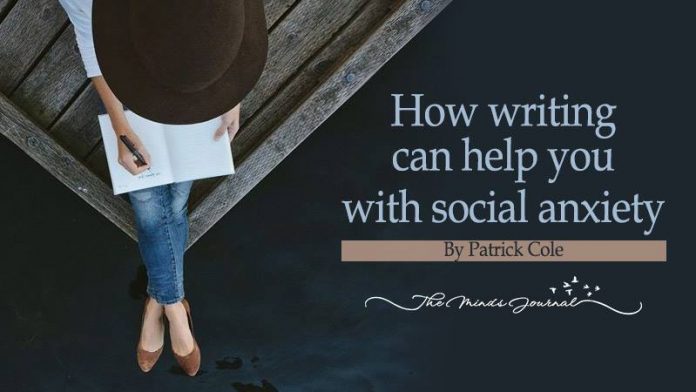 How writing can help you with social anxiety

It sucks to have social anxiety. I mean, we all want to be around people at least some of the time, after all they are one of the things that makes us happy – but when you have social anxiety that becomes neigh on impossible. And that really isn’t a way to live. And so, anything that can help a person that suffers from it should be embraced with both arms.

The problem is, there are just too many ideas out there, which one should you choose? Well, choose writing. And I’m not saying that just because I’m a writer. Numerous studies have revealed that writing can help you regulate negative emotions.

But it’s more than that. Writing can specifically help with social anxiety.

The first way it does this is that it lets you run through scenarios that you think will cause you social anxiety. And it will allow you to do so far more precisely and carefully than just thinking about it will. After all, if you’re just thinking about something it’s the easiest thing to just skip ahead, jump back, or let your feelings take over. That’s far less likely to happen when you’re writing.

And so you get a chance to be more critical. “Would people really think that?” You might realize, as you’re writing down that people would be critical.
“Would they really pay that much attention to me?”

Or you can consider what you would say in certain situations. You can sit back, think about the right response and then write it down, so that you’ll be in a much better position to actually remember them when the time arrives. In this way you’ll be forearmed and therefore be far less likely to be anxious.

Whatever you do, you get to manage your anxiety. You can write your way through the anxiety you’ve got and that is a vital aspect of overcoming the social fears you have. After all, the last thing we should do when we feel socially anxious is panic as that strengthens the fear and reinforces your feelings. That, however, is a very difficult thing to do in the actual situation.

By simulating the experience and running through the scenario several times on paper, you’ll be far less likely to run away – both on paper and when the scenario rolls around.

You can compare notes

With who, your friends, other people with social anxiety? Them too, but they’re not who I’m talking about. I’m talking about with your future self.  You see, our memories and our predictions of future events aren’t particularly good. We color and change them all the time with whimsy and fantasy.

For example, in a study where women were asked to report on how much menstrual pain they experienced, some women told the researcher they experienced more pain than others. The psychologists noted this down, then asked all the women to keep track during the experience by writing down how bad their pain was each day. He also asked them to record, a week after their period had passed, how much pain they had felt.

In other words, their expectation of pain made them remember more pain!

Now please note, this isn’t because those women were lying. They were telling the truth as they saw it. It’s just that memories aver easily altered and the expectation of pain altered their perception of how much pain they experienced.

Similarly, if you suffer from social anxiety, you might change your memories after an experience to make yourself believe that you were far more anxious (and it was far worse) than it was.

and control some of my… Read more »

What kind of lover would you be? Would you take us to a sacred place on the edge of where the world dissolves and we begin?
Read more
wpDiscuz
9
0
Would love your thoughts, please comment.x
()
x
| Reply