Who’s the Real Mother of The Child? Your Answer Will Reveal Your Personality: TEST 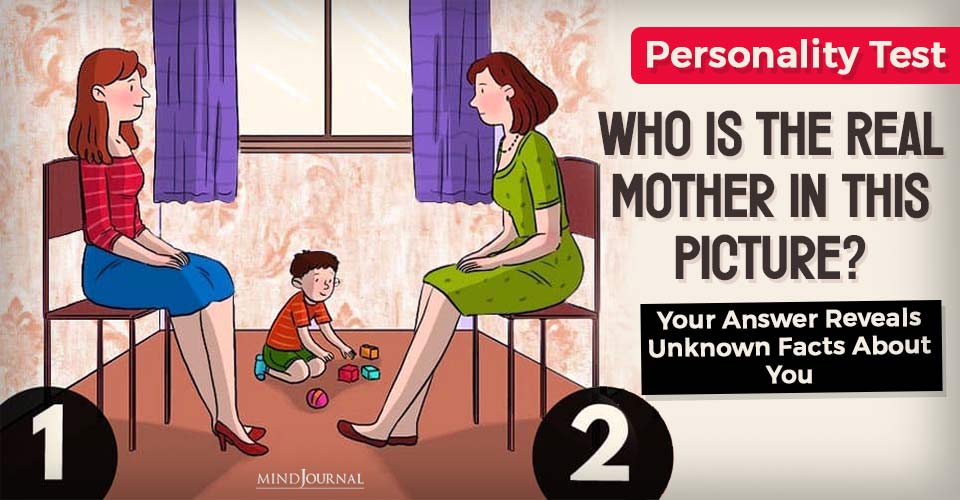 Do you know your visual perception can reveal your personality? Test who is the real mother among the two figures in this visual personality test, and find out the hidden secrets of your true personality.

The results of this quiz fall into two categories. As shown in the picture, there are two ladies in a room who are sitting opposite each other while a toddler boy plays on the floor. Both the women sitting in the room seem like they can be the child’s mother, don’t they? But obviously only one of them is. So take a good look at the picture, and choose which woman you think is the real mother. And no cheating!

Related: Take this optical illusion personality test to know what your perception reveals about you!

Test who is the real mother

Here Is What Your Answer Reveals About Your Personality

1. If your answer to the test Who Is The Real Mother, is the woman on the left...

This is the answer that 70% of the people chose. And it is wrong. It might be possible that you weren’t really in a mental state to discern the details of the image.

However, it also might be that some of the traits in you might be unique to you and you only.

You are a creative one. Ever since you were little, you were the one who made the best science model or had the most beautiful dollhouse. You also had imagination on your side: It was easy for you to visualize things in your mind before they even were penned down. A young Nikola Tesla! And thanks to this, you were also highly sought out as a friend because with great imagination comes unique humor.

You also have a very unique taste in music and art which makes your opinion very valuable in most social situations. Also extending from the things above, you possess great goodness and actual empathy which makes your advice very helpful.

You are a hard worker and there’s a high possibility that your ambitions will be fulfilled.

Perhaps you did not stand out for superior intelligence, but your courage, tenacity, and effort have led you to succeed. To form a family is one of your priorities and we do not doubt that in the future it will be fulfilled if it has not already become a reality.

And last but not the least, you value money. After all, it’s okay to be sad in life, but it’s better to be sad in a plush apartment with a tub of good ice cream.

Related: The First Thing You Notice in The Pictures Reveals A Lot About Your Personality

2. If your answer to the test Who Is The Real Mother, is the woman on the right...

When toddlers play, they subconsciously face their parents as an act of asking for approval. So dear friend, you have nailed the correct answer. The lady on the right side of the picture is one who’s the real mother.

This proves the existence of intelligence in you that is far superior to what you think.

Your brain’s left hemisphere is highly developed. This is the region associated with logic and reasoning. Don’t be surprised now about all the times you were the first to answer a question in class. Your rationality makes you a great practical adviser and you are also sociable because you know that is an important source of experience from which you can learn.

In addition to a more conventional sense of humor that is delightful, you are sincere with trust and very good with secrets.

You also seem to have a sensual streak: when it comes to romantic endeavors, you were the one who was wooed; because simply, your practicality makes your personality scintillating.

Your dream trip would be with friends and loved ones but when it comes to introspection, you are a hermit.

Do you agree with our results?

If you enjoyed this visual perception personality test: who is the real mother, let us know in the comments. Also, feel free to share it with your friends.

Related: Take this 5-minute emotional intelligence test to find out whether you can effectively identify emotions!

74 thoughts on “Who’s the Real Mother of The Child? Your Answer Will Reveal Your Personality: TEST”

There Are 10 Animals Hidden In Plain Sight: Can You Spot Them All In 15 Seconds?

This sketch has at least 10 animals hidden in plain sight. But you have to find the hidden animals in less than 15 seconds to complete the challenge. Can you?

Many people have been able unsuccessful to complete this optical illusion challenge in the given time. So if you can then you might be one of the 10% population of the world.

So, are you going to find the hidden animal in the picture?

But before you play this quiz, take a look at how optical illusions work so that you can be better at it.

Can You Spot The Hidden Alligator In Under 10 Seconds? QUIZ

Do you want to test your IQ? In this hidden alligator optical illusion, try to spot the alligator among the squirrels in the tree. Only a Genius can spot them under 10 seconds. Can you?

Did you know that optical illusions can be anything? From photographs to paintings, with a hidden object remaining for viewers to have a close inspection.

So, how do optical illusions work?

An optical illusion is usually made up of visual deception. Our brains become confused by one or many visual illusions that exist in the same image.