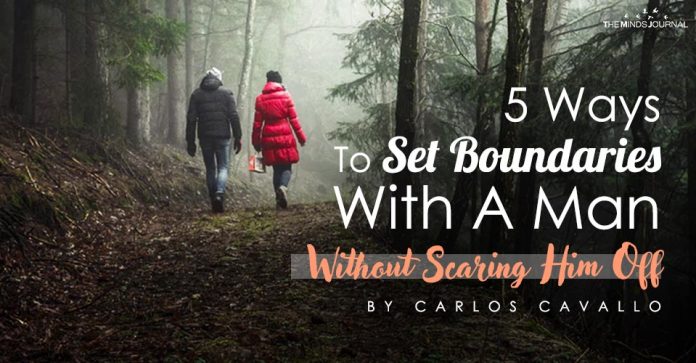 5 Ways To Set Boundaries With A Man

Don’t ever forget that.

There are a few places you want to set some boundaries to make sure that you don’t lose your way in your relationship.

The end zone in football is where each team is trying to take the football to score, right? And eventually, they want to win the game.

Well, you have to know up front that if he’s a guy who is just looking for a good time.

Is that his end zone?

Or is he looking for a relationship?

On the first date, you want to listen to the hints he drops in conversation.

If he starts talking sexually with you on the first date, well he’s probably testing you to see how far he can get on this date.

In this case, his end zone would be the bedroom at first.

Here’s another secret about guys that you won’t find anywhere else.

Men are always looking for a good time first and then a relationship if you turn out to be cool, fun and compatible with him.

Now, that doesn’t mean that’s how he wants the date to actually go.

You may think that all guys out there are commitment phobic. The way they act up front and then they kind of grow distant later on, you’ve had that happen maybe?

Sorry, I’m going to bust our game wide open for the ladies today.

It’s the one trick that guys use that works every single time. Women have been fed this lie for long enough.

Men actually like that women think that they are commitment-phobic because it gives him the excuse he needs to leave when the time is right when he realizes this might not be for him.

Remember this, guys are wired to commit to the woman that will unlock his heart by simply – all right, wait a minute, I’m going to get to more about this in a bit.

For now, just know that guys do commit but we do it differently than women do.

One of the big mistakes that people make when they’re dating is they try to make the first few dates a romantic fantasy come true.

They make dates that just simply don’t resemble real life at all for those first few months. It’s like a romantic playground.

Now, guys are mostly guilty of this because they’re the ones who are planning.

But you should be the one who is watching out and setting this particular boundary because the woman gets attached to this first date fantasy land because it feels wonderfully romantic.

I mean who wouldn’t?

Romantic dinners, thrilling events, going out to shows, the first date is often a little bit too much. So just go to coffee instead of dinner.

It’s not realistic for the man to keep up that level of expectation.

And what it does is it avoids the fact that you need to bond on a real-world level first.

You have to know if this guy is for real.

Crazy all-nighters where he ends up sleeping over or flying off to Mexico for the weekend with you on a whim, is just not sustainable by either of you.

Novelty also amplifies the attraction hormones in your system to a level where you’re going to be tricking yourselves about the level of desire and commitment you actually do have for each other.

You have to see, know and experience how you interact in the real world to know if a relationship with him is going to work.

3. Know your expectations and requirements for personal time and space.