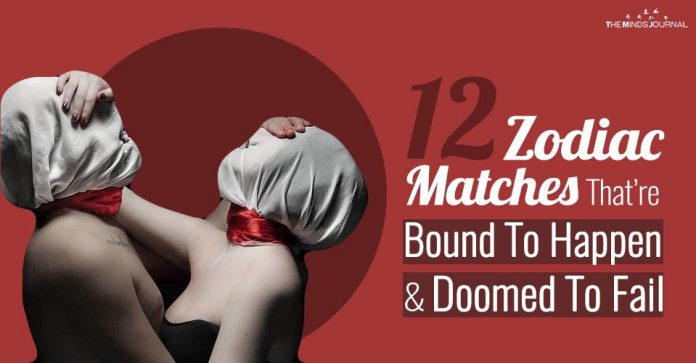 The Zodiac Signs And The Failed Marriages They Are Prone To Have. These zodiac matches are bound to happen and also doomed to fail.

The matters of the heart are risky, to say the least. Marriage is a giant leap of faith, where you are ready to put your future happiness and peace of mind at stake for a person whom you love. But is this love deemed to fail? Wouldn’t it be great if you could get a fair idea about your compatibility with a person?

Well, there are certain things that can give you a rough framework to work on. Astrology has been shown to influence many aspects of our lives. It is not because you can predict the future through the stars, but the stars you were born under have a certain influence on your life. They have a say in shaping your personality and thus can be used to judge your compatibility with other individuals.

These two signs are bound to get caught up in a heated affair that is full of passion. They will be so full of the high of first glance love that it will take over their rational judgment and might make them want to tie the knot. However, with time these two will realize that after the infatuation has fizzled out, they really don’t have anything to hold them together.

These two will also feel attracted to each other in the beginning because of how different they are. But their differences which were so charming to them, in the beginning, will soon start to get on their nerves. Sagittarius is unpredictable and adventurous, Taurus is grounded and stable. Together they’ll pull on the seams of their relationship till something breaks. Taurus will try to control Sagittarius, who cannot be contained or restricted and thus they will fall apart.

Pisces is too intense when it comes to emotions; whereas Gemini is more of a happy-go-lucky creed. Although they might be interested in a Pisces because of their inherent creativity, they won’t be able to hold on to them for long. The free-spirited nature of a Gemini is not easy for a Pisces to handle who gets jealous easily.

Another pairing brought together by the heat of the moment kind of passion and a promise of great sexual compatibility. But with time they will realize that they don’t have much in common other than pleasures of the flesh. When they are not always riding a high of a surge of hormones, they will find that their lifestyles are incompatible with each other.

It is very easy for Leo to charm others because their persona exudes confidence and grace. Virgos are hard workers and diligent. They are also not the ones to be bossed around by others, something which Leo quite enjoys doing. Friction in the relationship will start when the Virgo refuses to budge when they are right and instead point to the flaws of the Leo. For Leo, it is unacceptable that someone else should find them lacking.

For Virgo, the streak of rebellion and adventure in Aries is very tempting. They find themselves falling for Aries too hard and too soon. But soon, they find that the spontaneity of Aries is not settling well with their own methodical approach to life. They are more about research and preparation whereas Aries take life as it comes to them. Long-term compatibility is very rare in this combination.