How Does Someone React When Unhappy In A Relationship, Based On The Chinese Zodiac 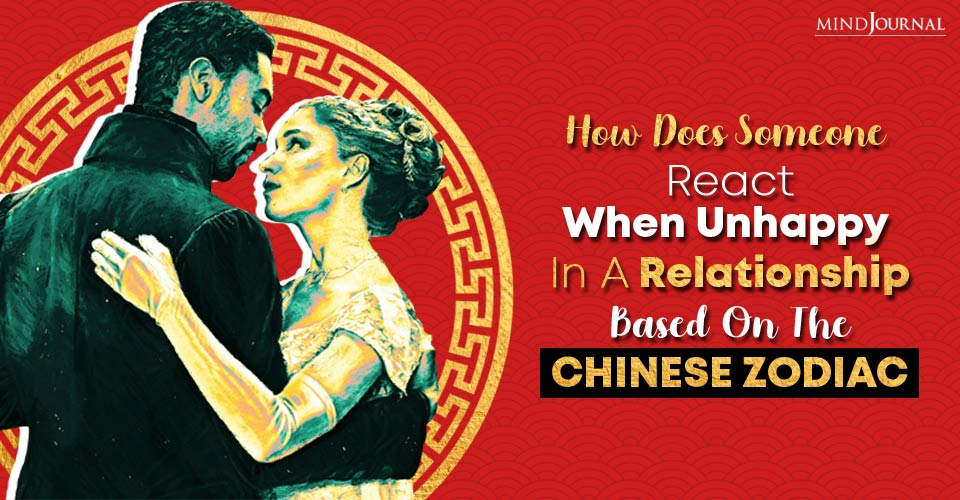 Chinese astrology and Chinese zodiac signs can say a lot about how you might behave if you are unhappy about the state of your relationship. They can reveal many secrets about you and your personality, which even you might not have realized.

Here Is How You Behave When You Are Unhappy In Your Relationship, Based On Your Chinese Zodiac

Rats find it easy to start new relationships but find it very difficult to maintain them. They get very bored, very easily. And rather than just end relationships sometimes they like seeing how much they can get away with and for how long. When this pattern continues what they are failing to realize is it’s not the person who they are dating who is the issue, it’s them.

They fake what’s really going on because they don’t want to believe it.

The ox is loyal and good at relationships. They gravitate towards relationships that last long and are healthy until the end. But sometimes people change and the relationship doesn’t evolve also. Instead of stating that an Ox will live in denial of what’s going on and continue to pretend the relationship was as good as it was when it began. It’s hard to let go but it hurts more holding onto something that’s not there anymore.

The tiger isn’t one who is too emotional or shows affection well. But when their relationship suddenly isn’t what it used to be they think they have to try too hard. Suddenly something is off in this relationship and they don’t know how to fix it.

Probably the most likable of all signs, when their relationship begins to fall apart instead of ending it, they try not to think about it. They get themselves consumed in work or projects, charity groups, or sports. They think out of sight out of mind but whenever they come home they are met with an awkward small talk where no one is actually saying anything or saying what they need to.

They turn to everyone else but their partner to talk about it.

A dragon tends to gossip and cause problems simply because they air their dirty laundry. Soon they find themselves in a relationship triangle because the person they turn to suddenly catches feels, their current partner gets jealous, they say it’s nothing and suddenly there is just so much going on the relationship ends.

The problem whatever it might have been initially morphed into something else and that’s the recurring theme dragons have in the relationship is not being able to address the problem with the right person.

Related: What Your Chinese Zodiac Sign Reveals About Your Personality?

When there are problems at home, suddenly they spend more time in the office. They leave longer for trips. While they work hard and love what they do they don’t like coming to terms with the relationship probably failing because of them.

The horse is used to being liked, thriving as they are the center of attention. Always the more dominant one in a relationship. So when their partner loses interest they don’t know how to really respond to someone not adoring them anymore. Their confidence comes from others. So when a relationship fails they lose a bit of confidence in themselves thinking they are to blame.

They try to fix it.

The goat has a very good sense of being able to tell when something is even slightly off. They have calm and reserved personalities. They will never take out intense emotions on you or channel negativity in your direction. Instead, they just want to fix the problem. Sometimes the problem though isn’t something you can fix. It’s something you have to walk away from and that’s tough.

Related: Why You’re Bad At Relationships Based On Your Chinese Zodiac

They take everything out on their partner.

As they fail to understand why the relationship is ending instead of realizing they are part of the problem, they project all of the blame onto their partner. They find themselves losing it for reasons that aren’t even related to the relationship. Pointing at someone else takes attention away from the fact they might be the problem.

They try and take control of the situation at hand.

When their relationship is out of control and they don’t know how to fix it they latch onto controlling what they can.

They keep you in the dark.

The dog is usually the most honest and loyal but when their relationship is failing and being the person they are isn’t working, they suddenly begin to shift into a version of themselves they or their partner don’t recognize and it only makes things worse.

Related: Which Chinese Zodiac Sign Is Your Soulmate? QUIZ

When relationships come to an end the partner doesn’t see it coming. The pig knows it but won’t admit it as they see things very logically. But they struggle in articulating it. So when they can’t identify the problem they create more. Their partner asks what’s on their mind and the pig is afraid to admit it’s over.

previousWhat Is Your Destiny Number And What Does It Reveal About Your Life?
next10 Speedy Ways To Connect With Your Spouse When You Don’t Have A Lot Of Time