The Magic Relationship Ratio, According to Science 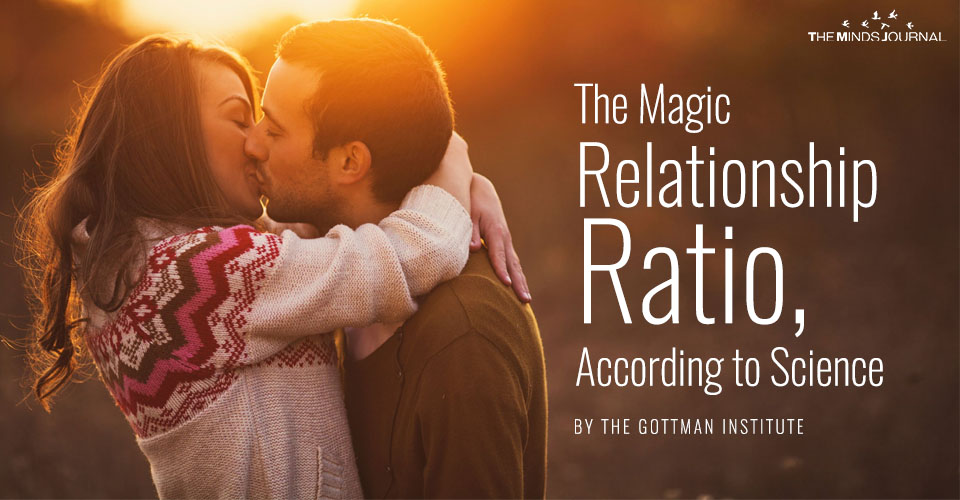 Whether it’s about not having enough sex, the dirty laundry, or spending too much money, conflict is inevitable in every marriage.

To understand the difference between happy and unhappy couples, Dr. Gottman and Robert Levenson began doing longitudinal studies of couples in the 1970s.

They asked couples to solve a conflict in their relationship in 15 minutes, then sat back and watched. After carefully reviewing the tapes and following up with them nine years later, they were able to predict which couples would stay together and which would divorce with over 90% accuracy.

Their discovery was simple. The difference between happy and unhappy couples is the balance between positive and negative interactions during the conflict. There is a very specific ratio that makes love last.

That “magic ratio” is 5 to 1. This means that for every negative interaction during the conflict, a stable and happy marriage has five (or more) positive interactions.

“When the masters of marriage are talking about something important,” Dr. Gottman says, “they may be arguing, but they are also laughing and teasing and there are signs of affection because they have made emotional connections.”

On the other hand, unhappy couples tend to engage in fewer positive interactions to compensate for their escalating negativity.

If the positive-to-negative ratio during conflict is 1-to-1 or less, that’s unhealthy and indicates a couple teetering on the edge of divorce.

So what’s considered a negative interaction?

The One Negative Interaction

Examples of negative interactions include another predictor of divorce, The Four Horsemen, as well as feelings of loneliness and isolation.

While anger is certainly a negative interaction and a natural reaction to conflict, it isn’t necessarily damaging to a marriage. Dr. Gottman explains in Why Marriages Succeed or Fail that “anger only has negative effects in marriage if it is expressed along with criticism or contempt, or if it is defensive.”

And these negative interactions happen in healthy marriages, too, but they are quickly repaired and replaced with validation and empathy.

Read How Negative Interpretations Hurts Relationships: 3 Things You Can Do

Couples who flourish engage in conflict differently than those who eventually break up. Not only do the Masters of marriage start conflict more gently, but they also make repairs in both minor and major ways that highlight the positivity in their relationship.

Below is a list of interactions that stable couples regularly use to maintain positivity and closeness.

When your partner complains about something, do you listen? Are you curious about why he or she is so mad?

Displaying interest includes asking open-ended questions, as well as more subtle signals such as nods, making eye contact, and timely “uh-huh” that show how closely you are listening.

Do you hold hands with your partner, offer a romantic kiss, or embrace your partner when greeting them at the end of the day?

Expressions of affection can happen in small ways both within and outside of conflict.

Within conflict, displays of physical and verbal affection reduce stress. If you’re having a difficult conversation and your partner takes your hand and says, “Gosh, this is hard to talk about.

I really love you and I know we can figure this out together,” you will likely feel better because their display of affection is bound to reduce tension and bring you closer together.

Our motto for making a marriage last is “small things often.” The small acts that demonstrate you care are powerful ways to enhance the positivity in your marriage.

Bringing up something that is important to your partner, even when you disagree, demonstrates that you are putting their interests on par with yours and shows your partner that you care about them. And how you treat each other outside of conflict influences how well you’ll handle your inevitable disagreements.

For example, if your partner is having a bad day and you stop to pick up dinner on the way home, you’re showing him that he is on your mind.

Those small gestures accumulate over time and will provide a buffer of positivity in your marriage so that when you do enter a conflict, it will be easier to engage in positive interactions that outweigh the negative.