The Danger of Sliding Instead of Deciding to Get Married 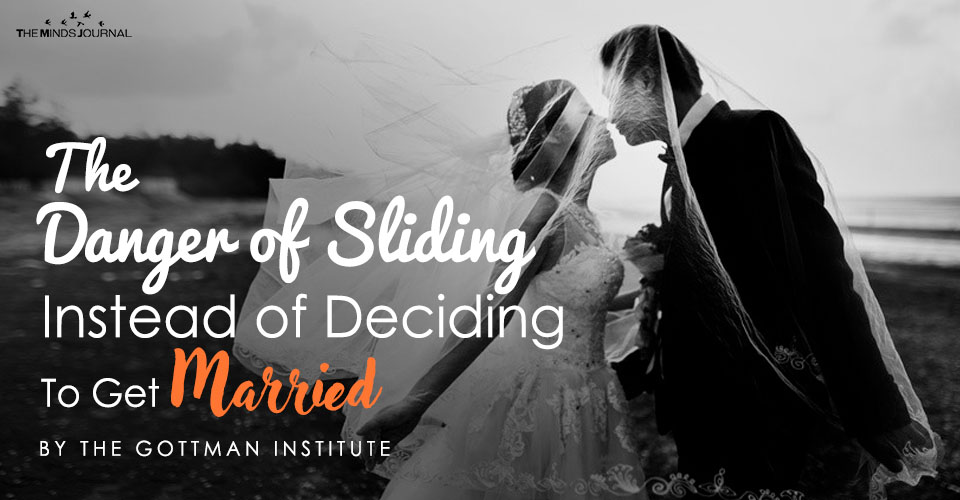 Why the danger of sliding is so rampant among couples instead of getting married?

Daniel and Sarah came to me for couple therapy because they were uncertain about the future of their marriage. Daniel had just moved out.

They were both unhappy and considering divorce.

In our first session, they described meeting each other in college. After graduating, they moved in together, and soon after she was pressuring him to propose, but he wasn’t ready to take the next step.

“I’m not sure I ever wanted to get married,” he told me.

He knew he didn’t want to break up with her. But with pressure from both families to “settle down,” he reluctantly gave in. For him, marrying never truly felt like the right fit. Now seven years and two kids later, they landed in my office.

Sliding instead of deciding to get married

According to Scott Stanley, Ph.D. and Galena Rhoades, Ph.D. in a report titled “Before I Do” sponsored by The National Marriage Project at the University of Virginia, a generation or two ago, people formed relationships and made commitments differently than they do today.

Back then, couples made more intentional decisions to get married, move in together, and have children.

Today, according to Stanley and Rhoades, marriage comes near the end of the line. About 90% of couples have sex before marriage, according to one study, and about four in ten babies are born to unmarried parents.

Most couples live together before getting married.

After surveying more than one thousand American couples, Stanley and Rhoades came to a major conclusion:

Some couples slide through major relationship transitions, while others make intentional decisions about moving through them. The couples in the latter category fare better.

The unintentional decision to slide into marriage, as in Daniel and Sarah’s case, is where one or both partners find themselves agreeing because getting married seems like the next “logical” step.

Commitment is one of the “weight-bearing walls” of Dr. John Gottman’s Sound Relationship House. It’s about demonstrating through your words and actions that you are in the relationship for better or for worse, and that you can count on each other.

As Certified Gottman Therapist Zach Brittle puts it, “commitment is about choice. And it’s not just choosing your partner.

It’s about choosing the relationship, day after day.” Commitment is critical regardless of your relationship status, whether you’re dating, cohabiting, or married.

Without commitment, couples begin to nurture resentment for what they think is missing in their relationship instead of nurturing gratitude for what they have.

If you’re worried that you may be sliding into marriage instead of deciding.

Here are five questions to discuss with your partner about the intentionality of your relationship.

2. What will we do if our marriage gets off track?

3. What can we do to get better clarity about our future together?

4. What are our views of marriage based on our families of origin?

5. What core values do we share about having children, religion, finances, work ethic, and general philosophies about life?

Read 5 Things to Know About Marriage Before Your Wedding Day