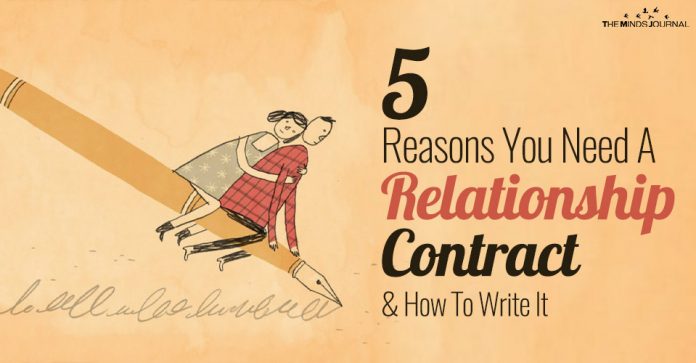 Every healthy relationship needs a set of boundaries that needs to be followed by both partners. Although most relationship rules don’t need to be stated separately, a relationship contract can help you reiterate the less obvious rules that help you keep your relationship alive for a long time.

There have been a few references to them in recent pop culture (most notably between Mark Zuckerberg and his wife Priscilla, on the TV show The Big Bang Theory, and – a version of one – in Fifty Shades of Grey), and the concept has been picking up steam as of late.

What Is A Relationship Contract?

It isn’t legally binding. It isn’t a marital contract. It’s a relationship contract.

You sit down together and say, “Okay, what does being in a relationship mean to us individually? What’s important to us that we make sure we include in here? What can we put in our contract that would make you feel safe, loved, seen, and cared for?”

You write down/type up all of the things that each of you wants to include, print it off, and sign it. Et voila… you’ve just created your very own custom-made relationship contract!

(Don’t worry… if you’re not sure where to start with your contract, much more detail is on its way.)

The Benefits Of Having A Relationship Contract

I have had dozens of my partnered/married clients write up relationship contracts with each other and the benefits in their relationship (and my own, personally) have been far-reaching.

Here are a few of the biggest benefits that you and your partner will likely experience after having a relationship contract written up.

So much of the social contracts that we build with people in our lives are covert – that is to say, they are never explicitly talked about.

2. Awareness of your partner’s needs

I really can’t imagine anything more romantic than intentionally sitting down with the person you love and having an extended conversation about what it means to them to be loved.

By co-creating your relationship contract, you will get the ultimate window into your partner’s physical/emotional/sexual needs.

There is also a positive trickle over effect from having a relationship contract in the level of honesty that you then feel able to bring to every moment of your relationship… the idea being, if you were that explicit and clear about your desires once, you can continue to do so on an ongoing basis.

By mutually deciding to take your unspoken social contracts and bring them into the light of day, you’ll both be feel that much safer to continue to be intentional communicators in how you engage with each other in the long term.

4. Clarity and alignment in your intentions

Whether you’re discussing topics that are usually relationship land mines (like your ideas around sex, money, children, religion, etc.), or talking about how often you want to have a date night, writing up your relationship contract will be an essential step towards finding clarity and alignment in your mutual desires.

So many of the arguments and resentments that spring forth from relationships are purely a result of one or both people in the relationship feeling like they aren’t getting their needs met. While the act and mindset of personal responsibility is a topic of interest for another day (long-story short: your needs = your responsibility to meet them), by having these conversations out loud with each other, you’ll be able to avoid so much unnecessary misunderstanding, drama, and tension by having talked about your needs upfront.

Have you heard of the arriving vs. sliding phenomenon? Simply put, there’s a big psychological difference (that positively or negatively impacts your relationship long-term) if you slide into your big relationship milestones (moving in together, getting engaged, etc.) versus if you arrive to those same milestones by actually making a choice. Put even more simply, deciding something and bringing intentional thought to it is better than just doing something because it feels like the logical next step.

This is where your relationship contract comes in…

Whether you’ve been dating for five hours, five weeks, or five years is irrelevant. It’s never too late to draft up a relationship contract between you and your partner because it helps drive a stake into the ground corresponding with the effort and communicative clarity that you want to bring to your love life.

So instead of letting your social contracts be covert, vague, and unspoken, why not sit down and say, “This is what matters to me”, and then allow your partner to do the same.

Without strong boundaries in place (which come from speaking our truth and saying No consistently) we are an easy target to be taken advantage of.
Read more
Hey Introvert

Are you an introvert who struggles with being social, but people don't seem to understand that? To change that, you need to be setting healthy boundaries.
Read more
Marriage

If all you do is shift your thinking to “How can I make my beloved happy today?” you will change the course of your marriage.
Read more
wpDiscuz
0
0
Would love your thoughts, please comment.x
()
x
| Reply