Do Men Benefit More From Marriage Than Women? 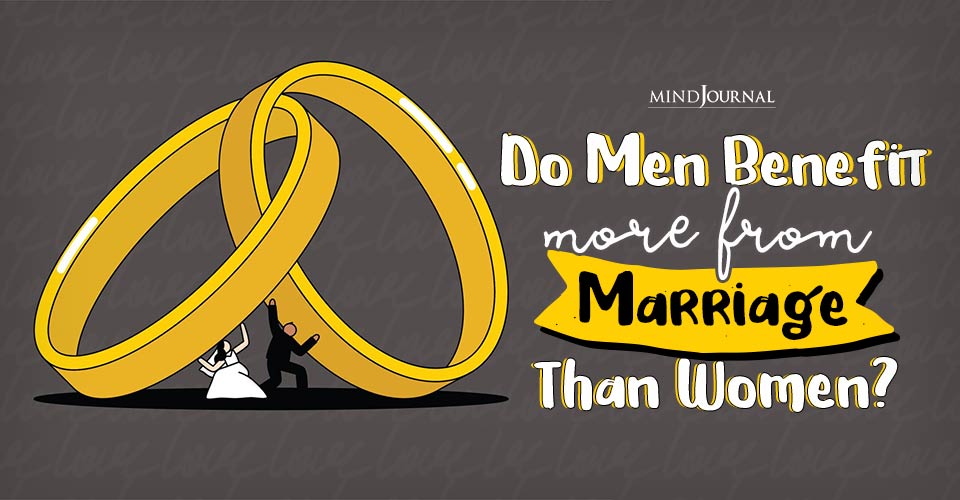 Women might have the desire to get married and live a happy life with their husbands, but does marriage actually give them everything, that they dreamed of? Contrary to popular belief, many a time, it has been seen in studies and research alike, that men benefit more from marriage than women.

Let’s find out the pros and cons of marriage for a man and what marriage means to a man.

Is Marriage Worth It for Women Or Do Men Gain More From Marriage?

A casual look at how marriage is represented in popular culture may lead one to conclude that ending up at the altar is the ultimate female desire. Wedding magazines are aimed almost exclusively at brides, not grooms. Reality TV shows highlight Bridezillas, not Groomzillas, and The Bachelor, in which multiple women vie for a ring, is a rating juggernaut.

The central attraction in the pageant of the average wedding is reserved for the bride’s dress, while the groom’s attire receives little billing. Pop culture queen Beyoncé herself has famously admonished men that if they like it, then they should put a ring on it

Men, on the other hand, are often depicted as commitment-phobic, having to be conned or whipped into marriage, or dragged to the altar against their deeply promiscuous nature, which abhors long-term monogamy.

The notion of a “midlife crisis,” during which men are bound to jettison their old wives for a new, younger trophy model is also a familiar cultural trope.

“Women have always been more critical of marriage than men. The great mysterious irony of it is – at least it’s the stereotype – that women want to get married and men are trying to avoid it. Marriage doesn’t benefit women as much as men, and it never has. And women, once they are married, become very critical of marriages in a way that men don’t.” – Elizabeth Gilbert

Benefits of Marriage: Do men benefit more from marriage than women?

Marriage, we have been led to believe, is a natural habitat for women, but a stifling cage for men. Thus goes the popular fantasy. However, in the real world of data, things shake out quite a bit differently.

First, confounding the view of marriage as the female heaven and haven is the fact that marriage actually appears to benefit men more than it does women.

Second, in contrast to the myth that marriage is a woman’s ultimate and sacred fulfillment is the reality that roughly two-thirds of divorces are initiated by women.

This is true not only for the young and hip: A recent AARP survey of 1147 men and women ages 40-79 who experienced a divorce in their 40s, 50s, or 60s, found that 66 percent of women said they initiated the split.

New research suggests that there is something unique to marriage—other than the trials of getting along day-to-day with another person—that may make it less than hospitable to women.

A recent paper by Stanford sociologist Michael J. Rosenfeld analyzed longitudinal data from the How Couples Meet and Stay Together survey—a survey of a nationally representative sample of 2,262 adults in heterosexual relations followed from 2009 to early 2015.

The results revealed an intriguing pattern: As expected, women initiated roughly two-thirds (69 percent) of the breakups in heterosexual marriages.

However, the gendered trend in relationship breakups held only for marriages and not for other non-marital unions. Moreover, women in marriages, but not in other relationships, reported lower levels of satisfaction.

According to Rosenfeld, these data suggest that the tendency for women to initiate breakups is not an inherent feature of male-female relationships.

Rather, it is a feature of male-female marriage. This finding appears to provide support for the notion that women experience the institution of marriage as oppressive, in large part because it emerged from and still carries the imprint of a system of female subjugation.

Noam Shpancer, Ph.D., is the author of the novel The Good Psychologist. He was born and raised on an Israeli kibbutz. He received his Ph.D. in clinical psychology from Purdue University. Currently, he is a professor of psychology at Otterbein University in Westerville, Ohio. His research interests center on issues of child care and development. He is also a practicing clinician with the Center for Cognitive and Behavioral Psychology in Columbus, Ohio. He specializes in the treatment of anxiety disorders. AUTHOR OF Insight Therapy Psychologically informed reflections on how we interact.View Author posts