How To Make Him Realize He’s Losing You 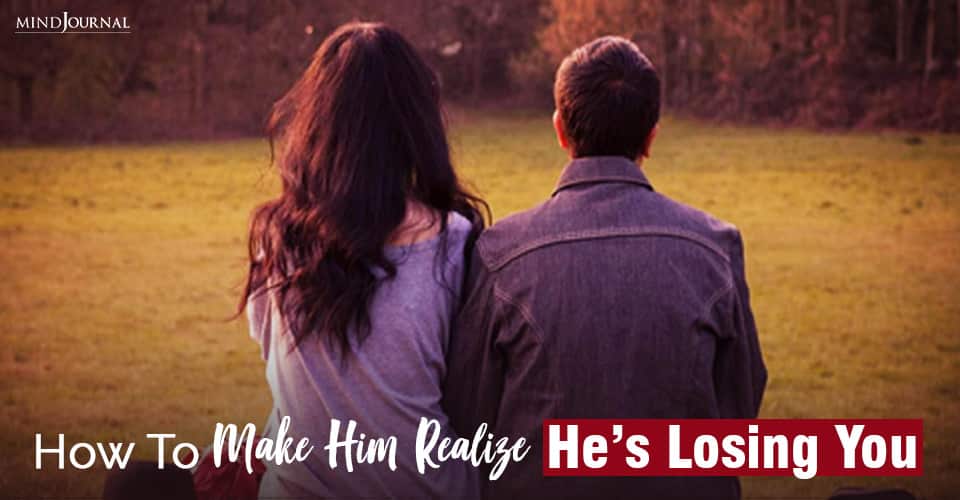 At the beginning of a relationship, a man would put in a lot of effort to impress and please his woman. But as the relationship becomes more intimate, men often tend to pull back and become comfortable. He will stop appreciating what you do for him. Are you being taken for granted by your man, and want to make him realize he’s losing you?

How to make him really understand that he’s at risk of losing this relationship?

Maybe you feel like he’s taking you for granted, maybe he’s not appreciating your relationship and he doesn’t notice all the ways you love him.

Maybe it’s time to wake him up and give him a little kick in the butt.

Before you end the relationship, you want to know that you’ve given it your best shot. You want to see if you can wake this guy out of his stupor and get him to see what he has in you.

Before we jump into how to make him realize he’s losing you, I have to show you the number one mistake women make when it comes to getting respect in a relationship. This relationship mistake comes up because of how you were probably raised and socialized— not by your parents either— it’s your friends.

You see, girls are taught from a very early age that, “go along equals get along.”

Unlike male friendships which are based on shared interests and hobbies and activities, the key to female relationships and friendships is self-disclosure and emotional support.

Both of which are often mutually incompatible with demanding to get your own needs met as a woman.

Women are brought up to go along and to get along but it’s imposed as a rule of all female friendships and social cliques. So be sure to take a good, long look at your own habits.

Do you fall victim to this kind of thinking?

Are you easily manipulated by your need to be liked and approved of?

If so, you’re going to want to root that out and manage it.

Read 8 Tips To Stop Being Taken For Granted

All right, let’s jump in with tip number one to make him realize he’s losing you.

Sometimes the biggest wake-up call for a guy is when he starts to sense that there’s been a change in the dynamic of the relationship.

There’s this place in a relationship where a guy thinks he’s got the upper hand. It usually happens a few weeks after he slept with you.

Now, a warning. I’m generalizing a bit here, but I’m going to tell it like it is. I’m not going to be politically correct and after all, that’s why you’re here. Carlos tells you the truth, not just what you want to hear.

So what happens is, after the guy sleeps with the girl, he starts to think, “Oh I don’t have to put so much effort into it.”

He starts to pull away a little bit. Then, the woman starts trying to make up for all of that and she ends up putting up all the effort that he should be.

Don’t fall into this trap because this is why a lot of guys pull away.

When you’ve invested a lot of time and emotion and effort into something, you’re going to be much more protective and possessive of it which is why you have to find a place to back off for a while in a relationship where you’re putting too much into it.

Go dark on him.

Stop answering his calls and texts for a few days.