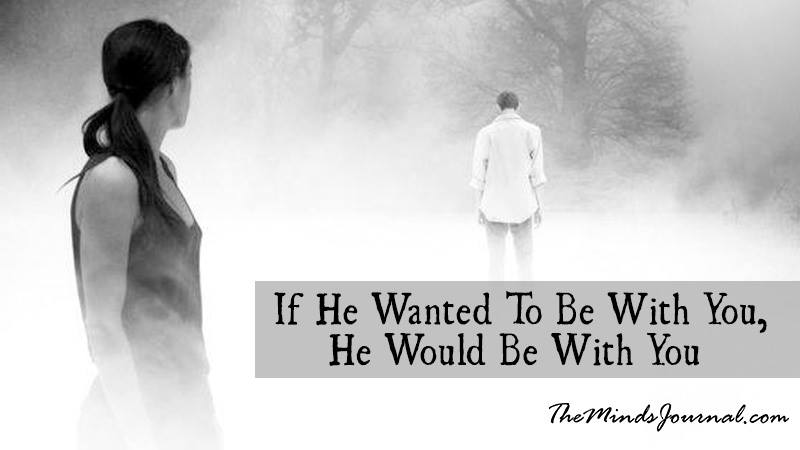 It’s a hard pill to swallow. But the truth is going to heal your heart a lot faster than simply letting it break over and over until you finally face what you knew all along anyway:
If he wanted to be with you, he would be with you.

There are a million possible scenarios here. It’s easier when he’s an asshole – selfish, only thinking of himself, using you to make someone else jealous, using you in general, treating you poorly, crushing you thoughtlessly, whatever. But it’s a lot harder when he’s a good guy, and you still have to let him go.

Or when he can’t seem to make up his mind and feels confused, which he doesn’t yet realize just means that he’s afraid of hurting you, that feeling ‘confused’ just a softer way of eventually saying ‘no.’

If he wanted to be with you, he wouldn’t have had to make up his mind in the first place. It would just be an answer that he felt deeply in his gut.

But regardless, whether he’s a wonderful guy or an asshole or somewhere in between, this is about you, moving on. Because no matter what the situation was, no matter how well he treated you or how much fun you had together or how well you got along, he doesn’t want to be with you. And that’s the truth.

And that’s going to be your life raft for the next several weeks or months, no matter how much you don’t want to grab onto it. It is what is going to eventually help you come to peace with the end of your relationship, or the fizzling out of your fling, or the ‘no more talking’ after you guys spent so much time ‘talking.’ It is the truth, and as ugly as it is, it will be the only thing that can help you move on:

It’s easy to try to soften the blow. He needs time, or he just needs a little space, or he’s just afraid of commitment and I just need to reassure him, or he builds walls and it’s my job to kick through them.

But think about the way you feel about him. How easy and natural and obvious it feels. How you don’t even need to question whether or not you should be with him, because it just feels right in your veins.

How, even if you were scared of committing to someone or getting hurt or opening yourself up, you were still willing to do it, because your heart had already made up your mind. You wanted to be with him, so you were. The decision was simple. It really wasn’t even a decision at all.

Now can you imagine feeling all those things but choosing not to be with him anyway?

That’s why your heart is broken. Because he didn’t feel those things. He didn’t feel that same certainty that you did, deep in your bones. And you can’t change that, and you can’t fix yourself, and there’s nothing you did wrong. It’s just the truth. His heart didn’t make the decision for his brain, because his heart is in a different place from yours. And that really, really sucks. And you just have to accept it. And that sucks even more.

Maybe you’ll get over this in weeks, maybe months. Maybe longer. It will hurt, some days will be horrible and some will be okay. But the smallest of silver linings is this: you can let your heartbreak once – instead of breaking it a million times by convincing yourself that he’s making a mistake or he probably misses you or you should call him. Love yourself enough to be hard on yourself:

Read Healing From Heartbreak: 5 Important Steps You Can Take To Move On

For me, love makes the world go round. A hopeless romantic by heart, I believe love is the best thing about us, and most of the time I am inclined towards writing about that.View Author posts