How To Get A Man To Chase You, Without Playing Games 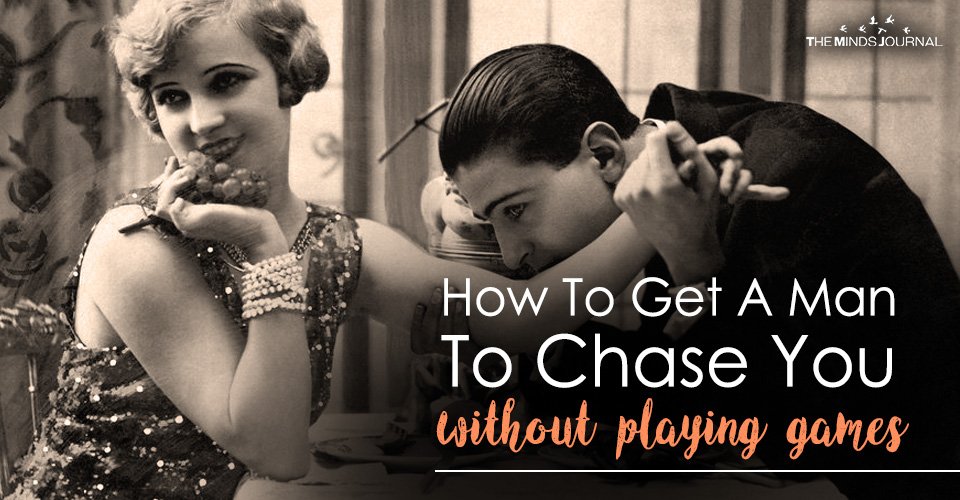 For years, I spent more time than I care to admit chasing after men, trying to convince the man du jour that he really did like me. It felt terrible. With each rejection, I felt worse and worse about myself.

I didn’t understand what I was doing wrong by calling men first, asking them out and showing interest.

Without fail, when I put myself directly in the driver’s seat when it came to my interactions with guys, it backfired completely. The devastating heartbreak continued until I learned a few things about the way guys are simply hardwired differently than we are.

People get pissed off when I say that men are hunters who like the chase. And I understand why.

On the surface, it sounds like I’m saying something demeaning. Those words, “the chase”, seem like I’m implying that men are not worthy or good enough for women to show interest in them.

Or that they’re masochistic suckers who like it when women are cold, rejecting, and mean to them. Or that women are stumbling around like weak baby deer waiting to be scooped up by a hunter. Or that women aren’t capable of attracting men, so guys have to do the work.

This couldn’t be further from the truth!

Menswear up and down that if a woman they were attracted to show interest, they would love it. And they’re not lying about this.

There’s a big difference between their definition of “showing interest” and ours. Male attraction requires two things: Sexual attraction AND effort.

Here’s what “the chase” really is.

As Millionaire Matchmaker Patty Stanger says, “the p*nis does the picking.”

If a man isn’t physically attracted to you, he won’t feel any real drive to get more of your attention.

Unfortunately, if he doesn’t find you sexually attractive, the relationship will never progress beyond the friends-with-benefits zone.

The second very powerful and less understood part of this equation is that masculine energy is most happy when it’s achieving something.

Achievement in relationships resides in the masculine realm of men. Making a woman happy is an achievement. So is proposing and “bringing home the bacon.”

In the early stages of dating, masculine achievement looks like the process of getting you to agree to little things that indicate you’re interested.

Simple things like, “getting a number,” then “getting a woman to text/call back,” then “she agreed to a date” are all achievements.

This is why sometimes dudes high-five each other after getting women’s numbers at bars. In the smallest way possible, they’ve won at something.

Personally, I’ve never had a contest with my girlfriends to see how many dude’s numbers we can round up over the course of an evening. I’m willing to bet you haven’t either.

Those very small, achievements embody “the chase.” Now, why is it a bad idea to at least smooth the path for a man you really like?

Here’s the problem with chasing men.

In most parts of our modern lives, the hot pursuit strategy works pretty darn well.

Want that job? Get that job or forge your own path. Want that house? Save up and buy it for yourself. Want that man? Well… uhhhh….

It’s super tempting to fall into the trap of thinking that we should be able to make things happen in relationships the same way we do in the rest of our lives. Namely, Herculean effort.

Not only does extreme effort not work, but trying too hard is a quick way to completely sabotage things. One reason that pursuing men doesn’t work is that the energy of accomplishment and striving is masculine energy.

He can’t achieve if you march over, tell him he’s hot and announce that you want to see him next Tuesday at 8 pm while thrusting your business card at him. There is no mystery. You’ve grabbed the masculine role in your interactions.

The second reason why pursuing men fails is that you launch yourself squarely into “here’s why you should like me” territory. You’re very innocently giving your power away and giving off a repellent, needy vibe.

I used to think that showing a man obvious interest by moving things along was confident, not needy. When I dug deeper, I realized that the reason this behavior is deemed “needy” is because I really wanted the guy to be interested in me! If a man rejected me, it ruined my whole day.

You know how it feels when someone is fishing for a compliment or wants your reassurance? You automatically resist. That’s neediness at work.

A man’s feelings can’t grow and intensify for you if you’re standing over him, hands-on-hips, wondering if he’s in love with you yet.

People want things that are precious and rare. And precious, you hardly look rare while you’re blowing up his phone and falling all over him trying to get a date or reassurance that he wants you.

Quitting the chase was like getting off the man drugs. Once I kicked the habit, I found that the quality of men who pursued me increased astronomically. The best part was that I no longer felt like I was begging for anyone to notice me.

That’s a big payoff for changing my tactics.

How do you make him chase you?

You get a man to chase by using your natural feminine magnetism to show him you’re interested without doing all of the work.

In practice, this looks like being happy, playful, flirtatious, and receptive to his advances. He must be the one pursue more of your time and attention while you allow and enjoy that attention.

When a man shows you he’s interested by regularly getting in touch and trying to date you, let him. Make him fit himself into your plans. Maintain your own life. Don’t suddenly stop working toward your dreams, quit your hobbies or make him the center of your world.

Also, have faith that the right man will eventually pursue you. Trust that if a man doesn’t advance toward you, he’s giving you a gentle “no” or “not right now” and let him fall away.

Stop trying to prove your worth or explain why you would be good together. The right one will be so captivated he won’t be able to imagine letting you go.

This Is How You Deserve To Be Pursued

9 Reasons Why You Should Never Chase A Guy

This Is Why You Should Never Chase A Man 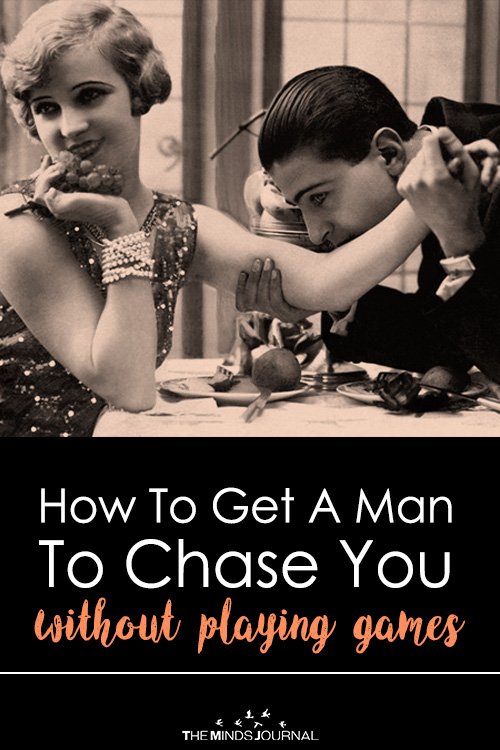