Lessons From ‘Carrots, Eggs and Coffee Beans’: A Short Inspirational Story on Adversity 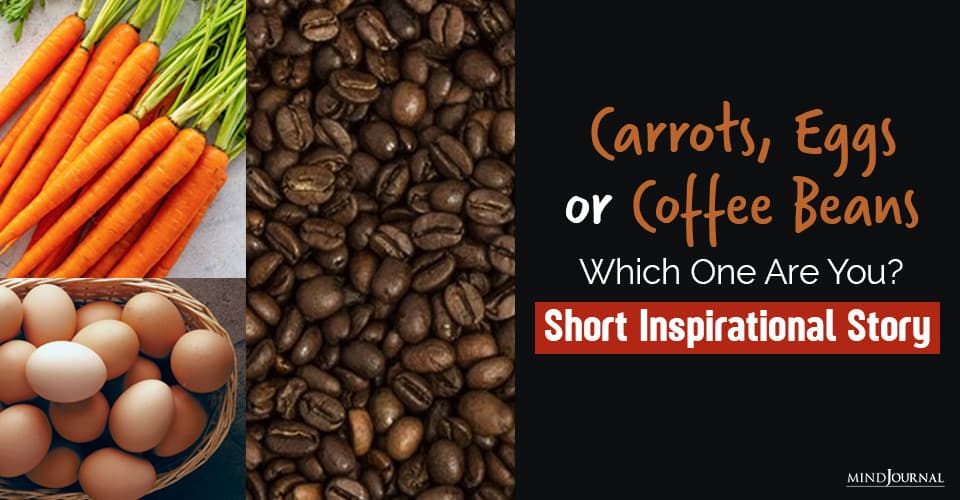 Problems and difficulties give us the chance to become stronger and transform those obstacles into opportunities. An Inspirational Story about change, adversity, optimism, and how we look at our problems.

Life is challenging. When things get uncomfortable or too challenging, you become weak and lose your confidence, or you become the hardest cocoon and believe you are unfazed. Maybe it workes for a while, but then life brings you another one.

No one is saved from the adversity of life. But how you meet life makes all the difference. Do you chose to pause, stop the running and face the adversities, the fear, sadness, and grief that was present? At that very moment, you become real to yourself.

The adversity of life don’t end, it just changes, as we continue to grow and evolve.

Here’s A Short Inspirational Story To Help You Remember That No Matter What Stage Of Life You’re In, What Matters Is How We Respond To Situations.

A young woman went to her grandmother and told her about her life and the difficulties she is facing in every phase of her life. Things were so hard for her, she felt like she’s hardly making it through and wanted to give up. She was tired of the difficulties that never seemed to end.

Her grandmother took her to the kitchen without another word. She filled three pots with water and placed each on high fire and bring them to boil. In the first pot she placed carrots, in the second pot she placed eggs, and in the last post, she placed ground coffee beans.

In about twenty minutes of boiling, she turned off the gas. She pulled the carrots and egg out and placed them in different bowls. Then she brings out the coffee and poured it into a cup.

She kept the bowls and the cup in front of her granddaughter, and asked, ‘Tell me what you see.’

“It’s Carrots, Eggs, and Coffee”, she replied while being confused.

“It smells amazing” — She informed.

The granddaughter then asked, ‘What does this mean, grandmother? What does these three mean’

The grandmother then explained that all three of these objects had faced the same adversity: boiling water. Each reacted differently.

The carrot went in strong, hard, and unrelenting. However, after being subjected to the harsh boiling water, it softened and became weak. The egg had been fragile. The egg has its thin outer shell protecting it, it goes in the boiling water being hard outside but keeping its liquid interior inside, but when it came out, it became hardened as a whole. The ground coffee beans were unique, however. After they were in the boiling water, they had transformed the water.

Related: Life Lessons From The Joker: What We Can Learn From The Clown Prince of Crime