Can You Spot The Six Hidden Faces? Optical Illusion Test 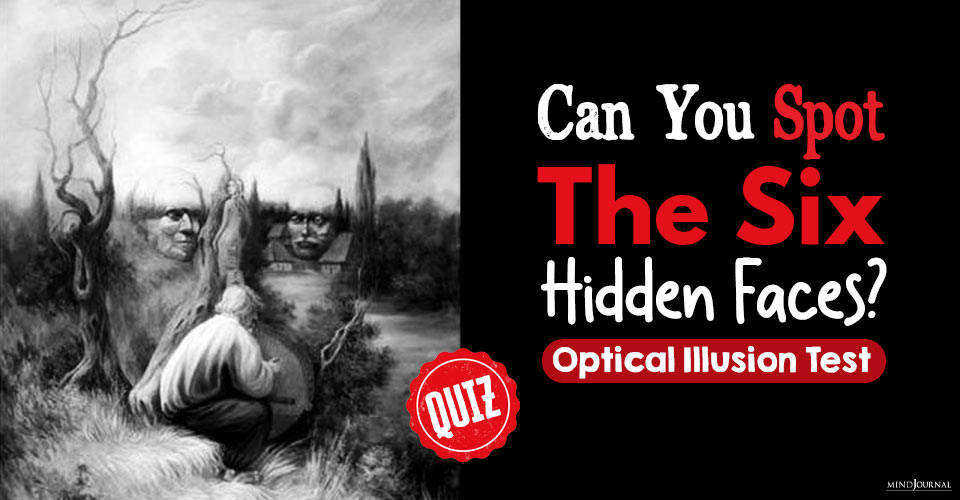 We say, that only people, who are detail oriented will be able to perceive all the humans in the photo. Find all six people in this brain test!

If you have ever wondered whether you are a person who focuses on details, then this is where you can take the test to find out. There are supposed to be six people in this photo. But only the hypervigilant people will be able to find them all. Most of the people will not see all the six people in the photo. Especially the first time they see it.

Being able to find all the six people in the photo is a truly amazing feat to accomplish. It gives you a thrill when you search for it. It makes you feel triumphant when you actually find all of them.

People who can find all six people from the photo are extremely vigilant and can perceive minute details in a context. This optical illusion not only requires you to be detail oriented but also have a great eye for patterns and deviations.

Don’t be discouraged if you don’t find all six. This photo is a tricky optical illusion test that is meant to deceive your eyes. Not finding all six people is nothing to be ashamed of in this mind-bending experiment.

Are you ready for this quiz? Take a look at the black and white optical illusion and try to find all six people.

Find All Six People In This Detailed Oriented Optical Illusion

1. The old man with his back turned to you.

This is the easy and obvious one. Many people may focus their attention on the man who is facing away first. Up close, the man who appears to be lurking behind the huge face’s mustache is actually another man.

2. The woman in a tree standing between the twin faces.

A faint representation of a lady can be seen just above the man, or in front of him (as the image indicates). It appears practically indistinguishable at first, but if you focus on the object that resembles a nose, you can clearly make out the face.

3. Twin-faces next to each other

4. Painting of a child and lady

You can see a girl or child with a man wearing a hat if you look very closely at the figure on the left within the face of a man. One could argue that the small figures one is looking at have no apparent faces.

5. Face of the man with the elements

Finally, if you step back from the photo and look at the image as a whole you will be able to see large face made up of the elements in the environment.

Can you see all 6 faces in this detailed oriented optical illusion? Share your answer in the comments below!

8 thoughts on “Can You Spot The Six Hidden Faces? Optical Illusion Test”

How Winnie The Pooh Can Help You Understand Your Personality: Fun Quiz

Mixed with nostalgia and fun, the Pooh Pathology Test is an interesting way to find which Winnie-the-Pooh character matches your personality and mental behaviors.

What Is The Pooh Pathology Test?

The Hundred Acre Wood may appear pleasant on the surface, but if you look closer, you'll discover a forest of undiagnosed cognitive deficits and psychological issues.

Winnie the Pooh characters were examined by professors Dr. Sarah E. Shea, Dr. Kevin Gordon, and associates, who came to the conclusion that each of the characters could be connected to a certain psychological condition.

Each character was found to have "severe" menta

Christmas Test: The First Word That You See Can Say A Lot About Your Personality

Christmas is almost here, and I just can't contain my excitement anymore. So I thought, why not have some fun and try out something interesting? Personality quizzes and tests were always popular and this Christmas test is going to blow your mind, be rest assured.

So, are you ready to check out this Christmas personality test? Let's find out!