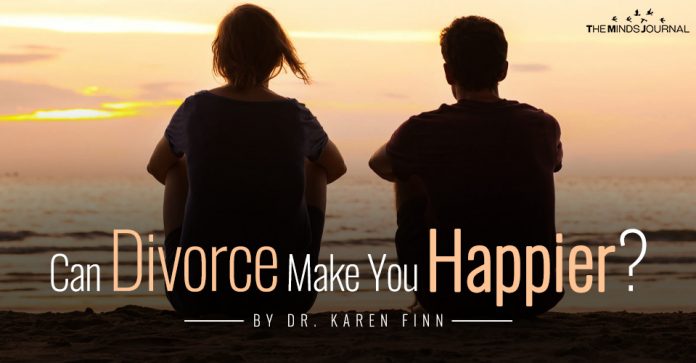 Can Divorce Make You Happier?

Do people become happier after they leave an unhappy marriage? There may not be an easy black or white answer here. Most people presume that they will be happier after a divorce as it will solve the core problem. However, studies show that divorced individuals experience higher psychological distress and less happiness than married people.

Most assume there are only two choices when faced with an unhappy marriage: stay and be miserable or divorce and be happy.

But you have more choices than just staying or going. Staying doesn’t have to equal misery. Leaving an unhappy marriage doesn’t always lead to happiness.

Marriages are very complicated and unique to each couple. What is the worst possible situation imaginable to one couple is merely a bump in the road to another?

Each spouse in a marriage is unique too. You and your spouse each had different experiences before you ever met that molded each of you. Some of this shaping was helpful and some you may still be working through because it trips you up at times.

Then there are the experiences that you’ve had together. Some have probably been good. While others haven’t. You and your spouse may even disagree on which experiences have been good and which weren’t.

However you’ve made it to the point where you’re searching for information about leaving an unhappy marriage, you need to understand what doing so does and doesn’t mean.

Divorce is one of the most distressing life events you can ever experience. It hurts in ways you might not be able to imagine if you’ve never been through it. And if you have previous experience leaving an unhappy marriage, each divorce hurts in a different way because no two marriages are the same.

Divorce might give you the freedom to do the things you stopped doing when you got married. However, you have to choose to do them and for some, this is a difficult choice to make.

Unfortunately, leaving an unhappy marriage isn’t a guarantee that you’ll be happy or even happier. That’s because it may not be just your marriage that is making you unhappy.

Sometimes it’s hard to tell the difference between unhappiness about your life or a portion of it with being unhappy in your marriage. It can be so much easier to see your marriage as the problem instead of looking for other possible sources of unhappiness.

Other possible sources of unhappiness can include work, other relationships with family or friends, parenting, an empty nest, a challenge with physical or psychological health, lack of a sense of purpose, what’s happening in the world, comparing your life to someone else’s, and so many more.

On the other hand, it really could be your marriage that’s making you miserable. Maybe you and your spouse have become fundamentally incompatible. Maybe something unforgivable has happened. Maybe you’ve forgotten how to communicate in a kind way or at all.

Even if it is your marriage that’s at the root of your unhappiness. Leaving now may not be the right answer. Maybe marriage therapy will help make things better. Maybe you know things will never get better and you need to begin working toward an exit plan. 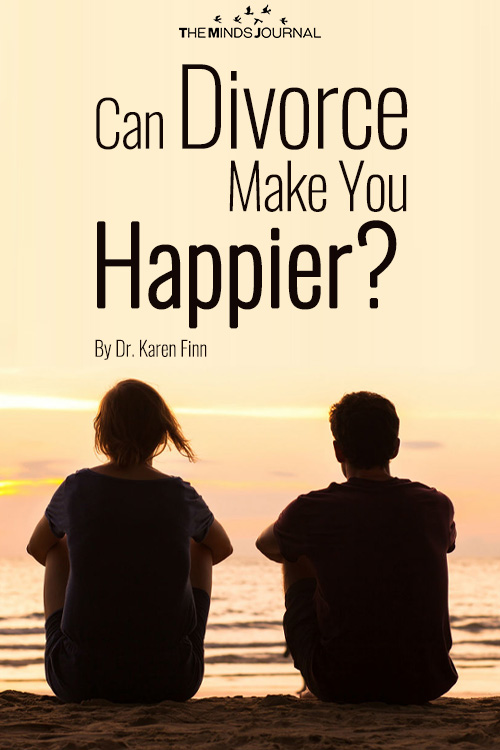 Dr. Karen Finnhttps://drkarenfinn.com
Dr. Karen Finn is a divorce and life coach. She helps her clients navigate the challenges of divorce – from the moment it enters their mind as a possible solution to the discontent they feel in their marriage (it’s not always the best answer), through the turmoil of getting divorced, and on through creating a fulfilling life post-divorce. You can learn more about Karen and her work on her website.
-Adverts-

The stages of forgiveness were developed by Dr. Robert Enright. It allows us to understand the process of forgiveness and letting go of pain and anger.
Read more
Breakup

Women, by nature, are emotional and tend to process breakups in a way where they can get past them and move on. Men, unfortunately, don’t always naturally possess the skills, nor have they been taught how to process their emotions. As a result, they can get stalled out and stay damaged after a relationship ends.
Read more
Relationship

21 Simple Ways To Build Emotional Connection With Someone

Learning how to develop an emotional connection can enable us to create a secure bond with someone and feel emotionally safe.
Read more
wpDiscuz
0
0
Would love your thoughts, please comment.x
()
x
| Reply