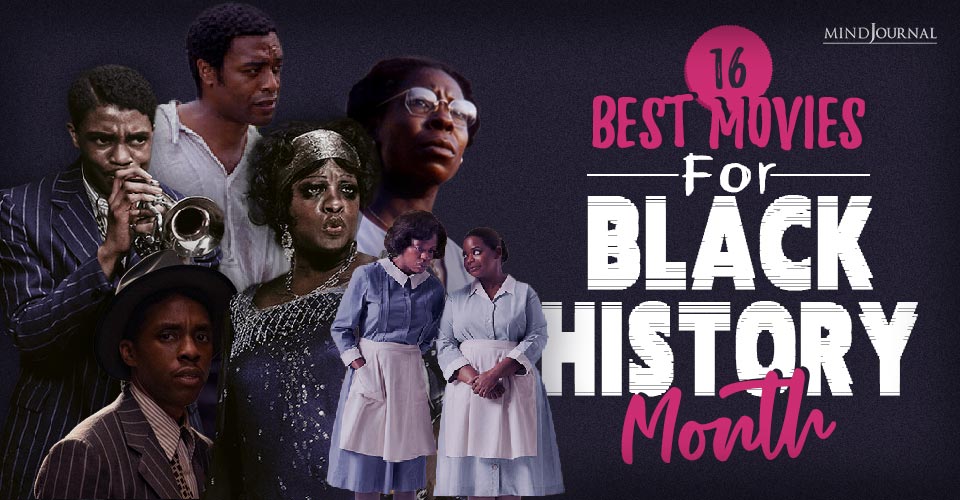 Looking for the best movies for Black History month? Look no further, we have it all.
The best way to understand any culture or its people is by their representation in cinema. It offers insight into others’ lived experiences and makes us aware about our history so that we don’t forget our roots.

African-American culture is widely known for it’s literature, music, art, and dance. So this black history month, let’s celebrate the power of art. Watching the best Black History Month movies will not only offer you a learning experience but these movies beautifully capture the struggles of overcoming racism and fighting for civil rights.

If you’re a movie buff and a lover of history, then the following list could be your companion for this month.

But before you add these movies for Black History Month to your watchlist, let’s know why this month is important to people of color around the world.

What is Black History Month?

This month-long celebration in the United States and Canada is an opportunity to honor Black achievements while also serving as a reminder that systematic racism still exists and giving hope to those working to change it.

There are many ways to celebrate the Black History Month from reading books, supporting businesses to watching Black History movies and documentaries. So what are you waiting for? Come and get the best of both worlds – entertainment and education, with the best movies for black history month!

Here Are Some of The Best Movies for Black History Month

When talking about black history month movies on Netflix, Ma Rainey’s Black Bottom based on true events tops the list. Starring eminent actors like Viola Davis and the late Chadwick Boseman, it celebrates the unfathomable talent of black artists. This movie is about an influential blues singer who is often referred to as the “Mother of the Blues,”. Her band faced unstable conditions during recording sessions in the 1920s in Chicago.

Another suggestion for the Black History Month movie list is 42, starring the late Chadwick Boseman and Harrison Ford. This movie is set in 1946. The legendary manager of the Brooklyn Dodgers, defies major league baseball’s notorious color barrier by signing Jackie Robinson to the team.

When confronted with the blatant racism on all sides, Robinson shows great courage and remarkable composure by refusing to retaliate and allowing his undeniable talent to silence the critics.

Want good movies to watch for Black History month? This poetic and coming-of-age drama focuses on a young black man who struggles to fit in while growing up in a poverty-stricken neighborhood in Miami.

It is also a cinematic milestone for an all-black cast and the first LGBTQ+ related film to win an Academy Award for Best Picture.

Spike Lee’s “Malcolm X” is one of the black history month movies for students and people around the world to learn about black liberation. It is also one of the most inspiring biographies that celebrate American life and is a tribute to the black activist and leader of the struggle for black liberation.

Malcolm, an African-American leader, started out as a small-time gangster but after he hit rock bottom, becomes a member of the Nation of Islam.

Related: 80+ Fascinating Movies To Not Miss

Want to learn about systemic racism? Among the movies to watch during black history month, Just Mercy tells a story about a man who was wrongfully convicted for murder. Bryan Stevenson played by Michael B Jordan, a young defense attorney proceeds to overturn the conviction and save him from the death sentence.