Are Empowered Women Empowering Men? Or Are we Suppressing Them? 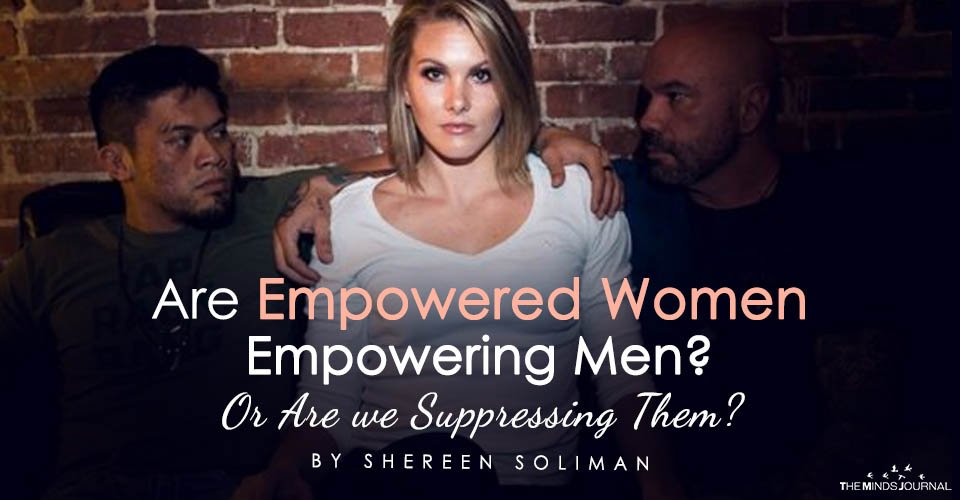 I grew up as a Tom boy. I was the only girl in the Boy Scouts, spent my days climbing trees and wore jeans and baseball caps. I grew up feeling empowered to do anything that my heart desired and I did just that, especially when it meant beating the guys at their own game. In fact, I took pride in beating the guys. Whether it was swimming in the Scouts, showing my boyfriend how to build a campfire after watching him fail miserably or outsmarting boys on tests. Anything they could do, I could do better and I was sure to let them know.

As I grew older I did start to dabble in some more feminine activities but when I found myself working in the construction industry for my first graduate job, I fell back into my old patterns of showing the guys that I was better than them at everything.

In that industry, I felt it was the only way to become successful and sometimes the only way to survive. The thing is that I actually loved being in this environment and I took pride in the fact that these guys got shown up when they got outsmarted by a girl. It was as though I was fighting some kind of war for all the women who had been suppressed throughout history and I was taking no prisoners.

When this approach starting to seep into other areas of my life, especially in my relationships it turned out to be more toxic than successful.

I started to notice this when my boyfriend of three years started to experience depression. I didn’t really understand it and after becoming so estranged from any kind of vulnerability within myself I simply didn’t know how to handle this situation.

For the next year and a half, I stayed with him out of loyalty but couldn’t help getting frustrated with his situation and watching all his family and friends pander to him when my response was much less sympathetic. As much as I feel ashamed to write this, at the time I saw his depression as a weakness.

I didn’t know at the time but the reality was that I was scared. Scared of admitting those vulnerabilities within myself and scared that I might be the problem.

When I couldn’t take it any longer I took an opportunity to do an internship abroad for a few months to give both of us some space. Those months away allowed him to empower himself and work on his depression, without me there to take his empowerment away he managed to pull himself out of that negative space. Needless to say, this leads to us breaking up as I was part of the problem.

Read 15 Things Bold, Fearless Alpha-Women Do Differently From Other Types Of Woman

At the time I didn’t learn from this experience and spent the next couple of years traveling, running away from any deep connection and any other opportunity to be vulnerable. That was until I fell in love again.

This time, however, I fell in love with a guy who wouldn’t open up because he was so vulnerable after experiencing a variety of traumas in his childhood and adult life. He was like a closed nut with a magical light shining from the inside and I desperately wanted to see more.

My response? To try and prize the nut open.

Back then this was my response to most things. Fight with determination and win, after all, I was empowered. I was strong and vulnerability (weakness as I saw it) wasn’t something that existed in my world. Despite all my efforts, this strategy backfired.

We broke up and the following year I learned what real vulnerability was, through experiencing my own series of traumas that invited intensely vulnerable emotions into my consciousness from depths that I never knew existed inside me.

I learned that my ’empowerment’ had silenced the men in my life and highlighted them as weak against my own strength of will.

I had shamed them for having vulnerable emotions, and my “being soft is a weakness” attitude didn’t allow them to show vulnerability in my presence, so instead they suppressed it.

For the guys that stuck around, family, friends and romantic partners, these suppressions slowly crept towards depression as these men were frequently rejected by the empowered women in their lives who paraded the same message as me.

What I’ve come to realize since is that as an empowered woman I can suppress men if I don’t show my vulnerabilities as well as my strengths. As women, it’s socially acceptable for us to be emotional as much as it is now for us to fight our corner and as empowered women, it is important that we do this to break down the shame that surrounds vulnerabilities. If we don’t acknowledge those vulnerable emotions then we don’t create a safe emotional space for men to do so either. That’s when our empowerment silences men, rather than empowers them.

I'm Shereen, a traveler, deep-thinker, and explorer of all things inside and out. After experiencing some traumatic incidents which took me away from my nomadic lifestyle, I made it my mission to get back to living free and fearlessness no matter what. I write about what helped me process all the traumas, how they've changed my life (for the better), and why steering your own recovery is the most important thing you'll ever learn. Feel free to reach out to me via www.shereensoliman.com or www.traumaontour.com, happy exploringView Author posts