10 Cool Optical Illusions To Try Out And Challenge Your Mind 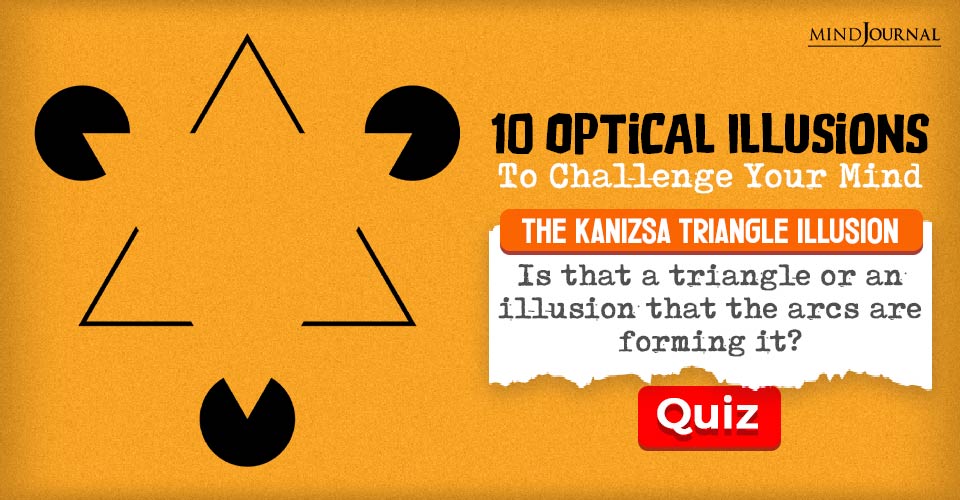 The Muller-Lyer illusion is a well-known optical illusion created in 1889 by a German psychologist called Franz Carl Muller-Lyer. It consists of two same-length arrows with parallel lines that appear to be of different lengths to the eye.

Among the amazing optical illusions, this one is particularly intriguing since it uses visual context to deceive your eye and brain. The line with closed arrow tails will appear shorter than the line with open tails. Putting this image in motion helps it to stand out even more.

Here’s one of the amazing optical illusions called the Kanizsa Triangle Illusion. Let’s take a look at how this cool optical illusion works. So, do you see the white triangle? That’s odd, what if we were to tell you that there’s no a triangle that really exist but appears to exist because of the other objects around it. There are just black shapes around it that create an illusion.

That’s right, the brain tends to fill in the gaps and allow us to see things that aren’t really there.

When the Moon is rising or setting, why does it appear so large? The Moon illusion is the name given to the psychological deception that our brains perform on us. Photographs show that the Moon is the same magnitude near the horizon as it is when it is high in the sky, yet our eyes don’t see it that way.

As a result, it’s an optical illusion based on how our brains process visual information. Even though we’ve been witnessing it for thousands of years, no satisfactory scientific explanation for why we see it exists.

A negative image is the polar opposite of a positive image. White or light parts appear dark in a negative photograph, whereas darker areas appear light. Photo negatives are usually developed into great photographs in a dark room. The negative picture visual illusion, on the other hand, allows your visual system and brain to construct a color image from a negative photo for a brief period of time.

Isn’t that fascinating? So go find a negative photo from your album and try this cool optical illusion now!

In 2005, vision expert Jeremy Hinton developed the lilac chaser, which is a sort of visual illusion. To see the illusion, open a new window and look at the lilac chaser illusion. Watch what happens if you stare at the black center cross for at least 30 seconds. Like other optical illusions, it is a fascinating opportunity to investigate how the brain and perception interact.

Related: Are These Baseballs The Same Color? Optical Illusion Test

So did you have a look at these mind tricking images? Who would’ve known scientific experiments and explanations could be fun. Share the pictures of these amazing optical illusions with your friends and family to test their brainpower as well!