7 Ways To Make A Man Treat You Like His Queen 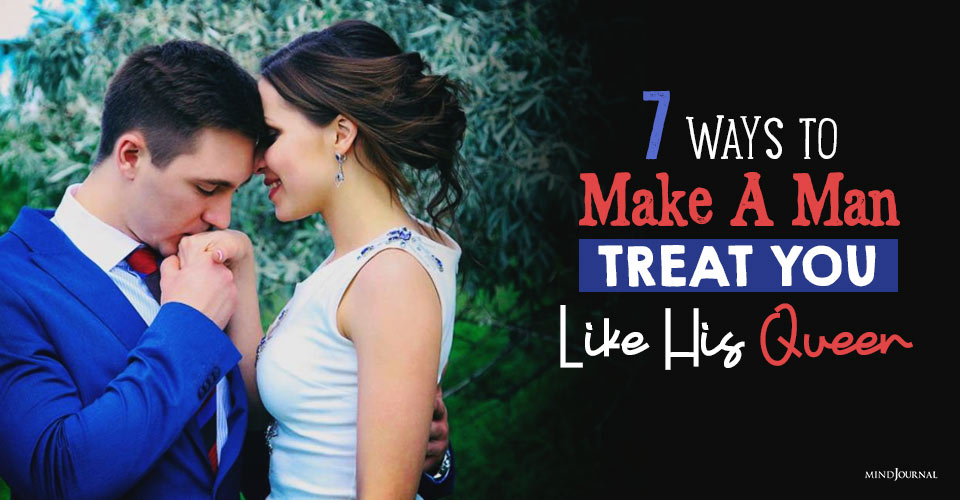 You shouldn’t put up with someone who ignores you or treats you like an option. You deserve better! So, here’s how to make him treat you like a queen and his top priority!

It is your right to expect a man to pay for your dinner, your movie ticket, your club entry fee, or anything he has to pay for in exchange for your time.

Dating and relationships are comprised of a balance of power. Men use money to get the woman they want. While women, subtly and skillfully, use their femininity to reel in the man of their dreams.

Women pine for a man’s affection, adoration, and commitment. Men yearn for sex.

In years past, women were brought up to be wives, mothers, and homemakers. Men were instructed to make a decent living to support their wife and children.

I am totally against women being domesticated or subservient to a man, but historically some things don’t change.

Women long for a meaningful relationship. They want to feel safe, loved, heard, sexually desired and appreciated. Even today’s successful, independent women innately want a man who will contribute to her emotional, physical and financial well-being.

Men know their job is to win a woman’s affection, love and commitment and they will court you with their compliments and gentlemanly manners—and whether they will admit it or not, they are fully aware that gifts are part of a woman’s love language.

Depending on a man’s level of interest in you, his finances and generosity, he will spend money to get you to go on a date with him and he will surprise you with trinkets and sparkle to woo and wow you.

He will send you flowers, wine and dine you, take you shopping for clothes and treat you to all-expense-paid trips because, in his mind, he is investing in you and his future.

If you think you’re worth it and you expect it, a man will rise to your expectations.

Men have a way of picking up on a woman’s self-worth. They know which women are confident, independent and self-reliant and which women are needy and desperate for a husband.

Men will work hard to impress a woman who is self-assured and self-sufficient, but they will put minimum effort into scoring sexually with the woman who is desperate for a man in her life.

I grew with low self-esteem issues. As an adult, I didn’t love myself and I didn’t feel worthy of a man spending money on me. I was afraid to accept a man’s generosity because:

My lack of self-worth caused me to settle for a husband who shirked his head-of-the-household responsibilities. He was always months behind on paying our bills and house note and he squandered his money at the local beer joint.

It was a freezing, icy Christmas morning, I discovered our electricity had been turned off because he failed to pay the utility bill. I wrapped our two small children in heavy clothing, wool coats, and toboggans and I watched them rip open their presents with white vapor floating from their little mouths.

That was a turning point for me; I decided I would never again marry a man who was irresponsible, miserly and poor because it is just as easy to love a man who has a personal relationship with Neiman Marcus and he pays his house note on time.