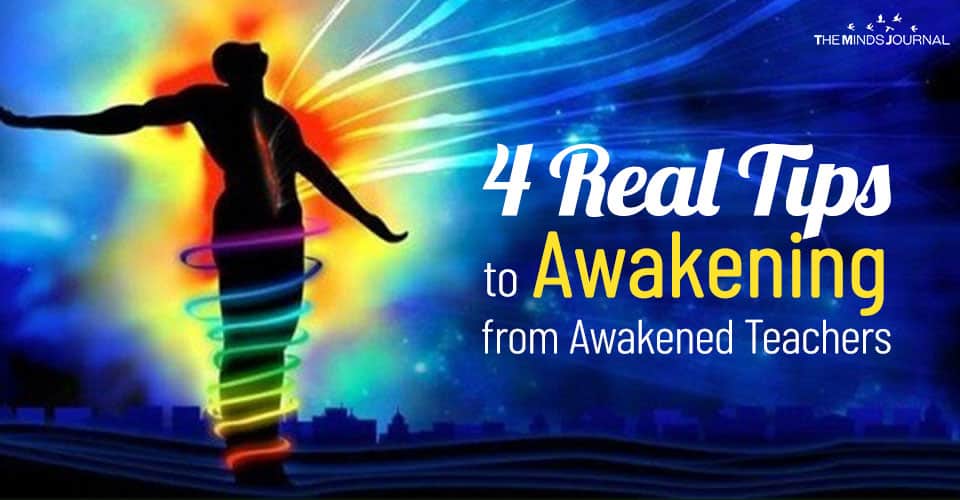 Tips to awakening from awakened teachers.

I have heard the following story:

Three blind men are sitting around a table in a house where they were guests. They are discussing whether the fruit the host offered to them was grape, pear or peach. None of them has ever eaten or touched any of the three kinds of fruit. They have, however, read a lot about different fruit, and from that, they knew what experience other people had about them. Each of them had a definite opinion about the issue. One of them said the fruit was grape, the other insisted that it was pear, whereas the third one argued that it had to be peach, and each of them believed that he and only he could be right. The fourth person present, the host who was not blind, said that none of them was right; the fruit they tasted was apple. The three blind men, who were unaware that their host was not blind, wanted to convince their host that they were right, they read a lot about it, and they were real experts of the issue. They argued that one cannot just declare about something, in that case, a fruit, that it can only be apple, since every real opinion that promotes scientific progress, may only be based upon a real debate. Their host told them–to no avail–that he could actually see that the fruit they consumed for dinner was apple, and he could not and did not wish to open a debate about it, the three blind men elevated the debate to a spiritual level, and they questioned whether seeing existed at all, or just some high and mighty characters, like their host, invented the idea in order to polish their own. The host was quietly watching them for a while, and he SAW that he was going to be unable to convince them with any argument whatsoever, so he left the room.

What Is The Truth?

The truth is that the three blind men did not have any problem with their eyes. Their vision was blurred by thick clouds of thoughts, e. g. like these:

If these people were able to stay quiet for a short while and turn their attention inward, this thick cloud of thoughts would gradually disperse, and they would be able to see reality clearly: the fruit they have eaten was apple!

It would not even be necessary to explain it to them what it was, as they would recognize it themselves!

Criteria for the Recognition of the Road Signs:

This little story illustrates that the Seeker is walking along the Journey shrouded in a thick cloud of their thoughts that prevents them from seeing the path leading to truth.

In these circumstances, it is important that the Seekers should recognize and notice the road signs that the awakened, seeing Masters have left behind for them in order to lead them out of trouble.

A few aspects that may help the Seeker to recognize the signposts:

Now you know 4 tips to awakening!

Read The Dark Side of Spiritual Awakening