3 Tips on How To Save An Affection-Starved Marriage 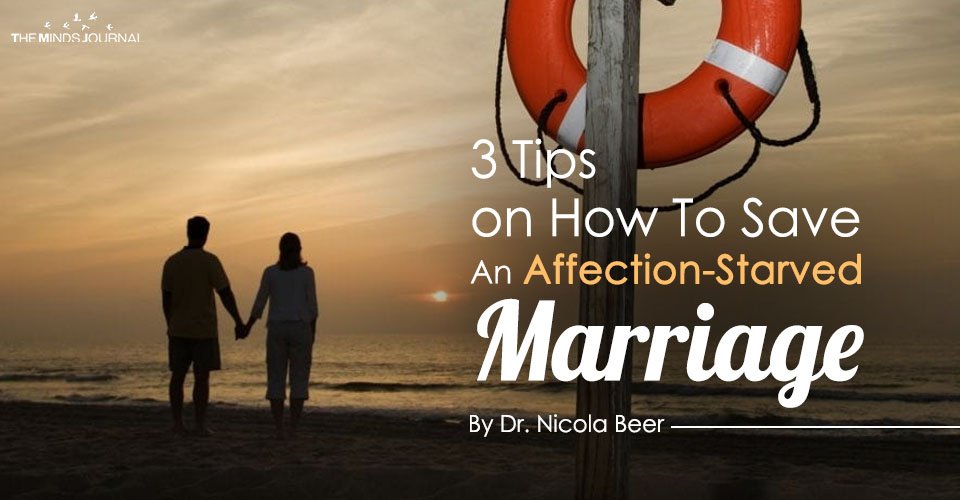 Affection can be one of the first things to go after children are born or when a marriage is in trouble. BUT it doesn’t have to mean something serious and it can be naturally restored as I will go on to explain.

Why after children? Hundreds of couples have shared with me that the affection they used to give to each other over time has been transferred to their children. Whilst this can easily happen couples without children can go through periods of lack of affection too.

If you are craving affection in your marriage right now and are longing to be hugged, kissed, or given affection through caring words or “I love you” message – you are not alone. Thousands if not millions of couples may find themselves longing to be desired and cherished and this is often because of bad advice that never works.

If you are upset about a lack of affection in your marriage you may be feeling lonely, ignored, unimportant and unloved. You may have started to see your husband or wife as distant, cold, self-centered or only interested in the children.

If this is happening in your relationship right now, read on as I will tell you what works and what doesn’t when it comes to saving a marriage from a lack of affection.

Marriage Counsellors or well-meaning friends may tell you to have a serious discussion with your spouse telling them that the lack of affection is bothering you.

This relationship advice presumes that your spouse did not know that you like affection or forgot all of a sudden!

Or that maybe they did not realize that they were not showing you affection and somehow didn’t notice it.

But telling your husband or wife to be more affectionate never works, perhaps you already know that from trying it in your own relationship.

If anything, it can drive your husband or wife further away.

Having had this issue come up hundreds of times in the couples I’ve supported over the years I know what works and what doesn’t.

Read How You Can Rebuild, Realign and Save An Unhappy Marriage

So here are a few of my tips on saving a marriage from a lack of affection.

Talking about it (even if only occasionally will not get your husband or wife to change. Yet many relationship counselors may advise telling your spouse ” You are not being affectionate”

It doesn’t matter whether you beg, demand, joke, it never, ever works long-term or feels good.

Of course, your husband or wife may do it when you have told them to, but if you have ever asked for affection and been given it on demand you know what I am talking about when I say -it feels horrible!

It used to make me feel more lonely when my boyfriend hugged or kissed me because I pressurized them too.  You want your spouse to be affectionate toward you because he or she wants to.

It reminds me of how I used to be around my Nan when I was young, she would always hold our face in her hands and demand kisses and cuddles, when we wanted to just say hi and run into her back garden and play.  It felt forced. Just like when your mum would want to kiss you goodbye in front of your friends before school.

If you are upset about a lack of affection, then really you are longing to be desired.

By ordering affection you may notice in your spouse a reluctance to be affectionate with you.

AND when you notice that it HURTS.

I used to ask myself the DREADFUL question “What’s wrong with me!?!” or “Why am I so needy?”

Even if your man or woman comply!

So my advice is DONT DO IT!

It harms you and makes them run a mile.

Stop listening to the advice that tells you to complain and INSTEAD see his or her lack of affection as a sign that perhaps they are not feeling loved either.

EVEN if you are being affectionate toward them – affection may not be big on their list of the ways they feel loved.  There are 15 emotional needs I cover in my programs and affection is only one of them. Perhaps they need support in other areas, want love shown in a different way or are resisting control.

Instead of telling them what to do or getting upset about something you cannot control (their behavior) practice making them happy and showing them love in different ways, for example through appreciation, respect, space, thoughtful gestures or gifts, these are a few of the 15 emotional needs.

The Secret of How to Keep Your Marriage Happy

Dan (name changed) shared with me in an online consultation that he is not having sex as much as he’d like to, barely at all in fact and he was feeling frustrated about it.  He complained that his wife is never in the mood and after being turned down, he no longer bothered to make the effort. “I stopped trying all together Nicola, it was hard taking the constant rejection”.