10 Signs That Your Partner Is Becoming Emotionally Detached

These are some little known psychological warning signs that show your partner might be starting to become emotionally distant from you. If you answer yes to 3 or more, you will probably need to take action now:

1.  Does he look to his left a lot when speaking to you?

Research has shown that an individual who looks upwards and to his left a lot during a conversation is not being honest with you about something. Looking to his left hand side is an indicator he’s using the creative side of his brain and may be lying. (Yes/No)

When you’re out with friends, see what way his shoes are pointing most of the time. If they consistently point away from you, it might be his subconscious saying he’s not interested anymore. (Yes/No)

3. They’re not as into sex anymore as they used be?

A change in a persons sexual behavior can be a sign they don’t want to express emotions for you anymore. It could also be a sign they’re getting sex somewhere else. (Yes/No)

If they don’t want to stay on the phone long with you or their texting conversations have become short recently, it may be a sign he’s about to dump you. (Yes/No)

5.  Has be patted your back recently while hugging you?

This can be a sign that he sees you more as a friend rather than a romantic partner. The pat shows he is uneasy about expressing emotion for you. (Yes/No)

6.  Have you noticed you don’t mirror each other any more?

If one partner is becoming emotionally distant from the relationship they will stop the automatic mirroring of their partner that they did in the early part of the relationship. If you’re not in sync anymore, it will show in your body language together. (Yes/No)

7.  Have they tried to pick fights with you recently over unimportant things?

If they’re trying to pick fights with you over silly things, it might be that they want to ignite an argument so they can breakup with you. He can use the argument as the excuse for initiating the breakup. This way he can divert some of the heat away from himself and onto you. (Yes/No)

8.  Have you seen a change in their writing?

Get out your last birthday or valentines card from your lover. Some experts have suggested that if they finish the word love with a small “e” it can be a sign their struggling to write the word love to you because they know their love has gone. Likewise if they write your name smaller than usual, it can be a subconscious response to your diminished importance in their lives. (Yes/No)

9.  Have they taken a renewed interest in their appearance lately?

A partner, who is cheating or thinking of leaving you, will often show this sign. There maybe someone new in their lives that they feel warrants making the extra effort for. New cologne, new hairstyle or new wardrobe could spell trouble. (Yes/No)

10.  If you bring up the future, do they change the conversation?

I’m not talking about settling down and having children. If your boyfriend seems unsure about that weekend away next month or even going to see that new movie in the cinema next week, it may be that they don’t expect to be still going out with you by then. (Yes/No)

Research has shown that the period most people get dumped in is in the first 3 to 5 months. If you’re in this time period you should take care in watching out for the above signs of emotional detachment in relationships. But of course break-ups can happen at any stage in a relationship.

If you suspect that your partner might break up with you in the near future, there are things you can do to stop it. In my book, “The Lovemap Code: How To Make Someone Fall In Love With You Using Psychology” I expand on this relationship quiz and show you how you can prevent a breakup before it happens or even while it’s happening. It is possible to reverse a breakup, but prevention is a lot better (and easier) than cure.

Do You Stay Or Go? Loving The Emotionally Detached Man

3 Reasons Why You Fall For Emotionally Unavailable Partners

6 Ways To Increase Emotional Intimacy In Your Significant Relationships.

Emotionally Intelligent Husbands Are Key To A Lasting Marriage 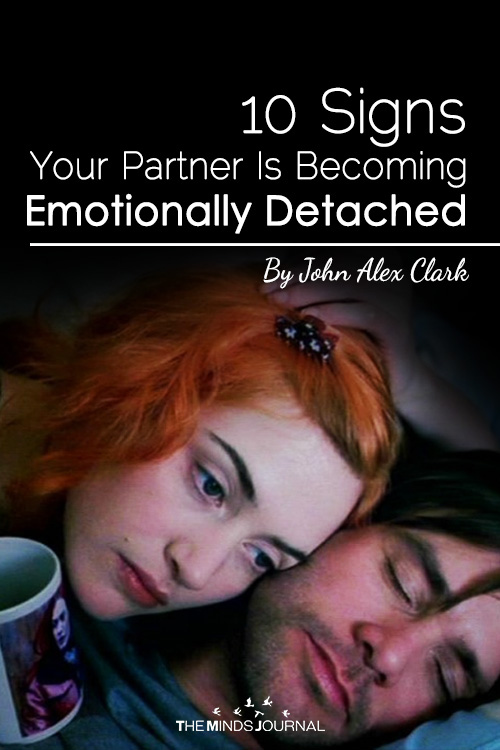