There Are Two Views to Every Conflict and Both Are Valid 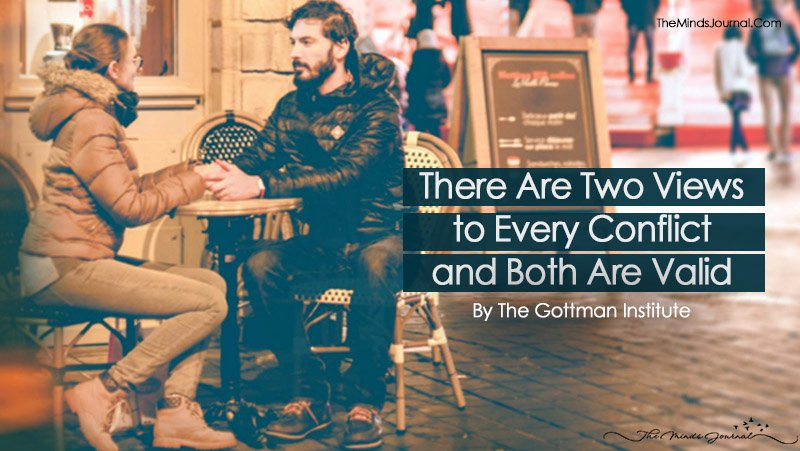 This is how you will know that there are two different valid views of every conflict.

Heather’s voice raises as she says, “How can you not see it my way? It’s the truth and you know it. You’re just too stubborn to admit it!”

“That’s not what happened at all. How can you not see that? I’m right, you’re wrong. You admit it!”

I step in, “Hey, I’m going to stop you guys because it feels like we’re missing each other.”

They both look at me as Heather says, “Well… Who’s right? Me or him?”

“You both are. Let me explain.”

Heather and Jason’s argument demonstrates one of the most common problems during the conflict: often, partners see each other as enemies rather than intimate allies in a battle against misunderstanding.

This is why partners use the four horsemen and blame each other for their relationship problems, which is destructive to their emotional bond and leads to more disconnection and fighting.

To turn things around during your next State of the Union conversation, when you are the Speaker make sure you pay attention to the “T” in Dr. Gottman’s ATTUNE conversation model.

The “T” stands for tolerance which, means accepting that every situation can yield two different yet valid perspectives that deserve equal weight. To help you do this, I want to share three perspective shifts that have done wonders for couples.

These three perspective shifts also remind us that there is always something worth learning from your partner’s viewpoint.

By gaining a new perspective on what is going on, conflict stops functioning as a barrier to connection and becomes a bridge to understanding each other better.

Conflict is in the space between

When couples are fighting, I like to use the metaphor that partners are like separate islands with murky water separating them.

Instead of trying to fix each other, partners should focus on cleaning that murky water. After the water is cleaned up, both partners can dive below the surface of what appears to be going on to discover what is actually going on.

The island visual is also helpful because it figuratively illustrates that we need to travel to our partner’s island to see their perspective of the world.

Typically when we are in conflict, we become stuck on our island and start throwing verbal rocks at our partner’s island. But if we swim over, walk around, and see the problem from their vantage point, we increase the chances of shifting our perspective to “Oh, I can totally understand how you see it this way. That makes perfect sense to me.”

Once you accept the idea that in every disagreement there are always two valid points of view, it’s no longer necessary to argue for your own position.

Instead, you can empathize with your partner’s feelings and really understand their “island.” This doesn’t mean you have to agree, but it’s vital that you understand where they are coming from.

When you do this and your partner does this for you, it becomes much easier to find a solution that works for both of you.

Read 3 Useful Blueprints For Managing And Resolving Conflict In Relationships

Finding the elephant in the room

There’s a tale about six blind men who wanted figure out what an elephant is by touching it:

The men began to argue about the elephant and each one insisted they were right.

To you and me, it’s clear: they are all right. The point is that in practically every fight there is an invisible elephant in the room, and the truth about that elephant lies somewhere in the middle of both perspectives.

Even the grayness of the elephant metaphorically implies that there is no single view of the “facts.” Often problems are not black or white.

The moral of the story is to acknowledge that your partner’s perspective is just as valid as yours. You don’t have to agree, but, to work through a regrettable incident, you need to show respect for their opinions.

With one fighting couple I worked with, the husband and wife were unwilling to understand the other’s perspective. I told the couple about the elephant.