Jim Carrey On Awakening: How He Began His Spiritual Journey 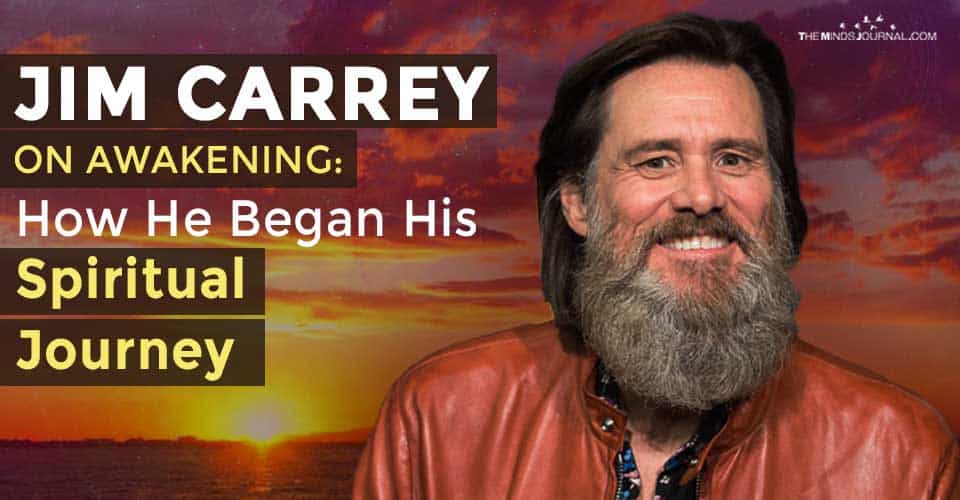 Jim Carrey is, without doubt, one of the greatest actors that have ever lived. He has made us laugh with his hilarious antics and impeccable comedic timing. Apart from acting, Jim Carrey is an incredibly spiritual person, who believes that spirituality can make your life better.

Read on to know more about how he found spirituality and how he began his spiritual journey.

His Struggle To Get In Touch With His Spirituality

We are lucky enough to be witness to an age of enlightenment in which people across the globe have been slowly coming closer to their spirituality. Many famous personalities have come out in the open and are working hard to help mankind with all the resources they have at their disposal. Within this group, there are many who have spoken about their own path towards enlightenment.

One of these people is Jim Carrey.

Everyone remembers Jim Carrey and his marvelous knack for comedy from his work in movies like ‘The Mask’, ‘Bruce Almighty’, and ‘Ace Ventura’. But besides his comedic side, he is also an incredibly truthful, spiritual, and enlightened person and it would benefit everyone to listen to what he has to say.

He began detailing his experiences at various events across many countries, recordings of which can be found on YouTube.

Carrey was inspired to become a comedian by his father, Percy Carrey. According to Jim, Percy Carrey had all the potential to become a wonderful comedian but he decided to play it safe which is why he settled for becoming an accountant. Unfortunately, the safe choice failed him and he was laid off when his son turned twelve. The family fell on hard times but young Jim Carrey learned that life has many pitfalls and it is much better to take the risk and do something that you are truly passionate about.

By the time he turned 28, Carrey had already worked in comedy for ten years. On the night, when he was in Los Angeles, he had an epiphany. He realized that his highest purpose was to help people forget about all their worries and sorrows, just like his father had wanted to do. And so he strove to become a person that others could easily reveal the best version of themselves too.

Carrey advises those who are just starting out to ask themselves what good they can do for the world using their abilities. It is the effect that we have on people that really matters because characters and disguises are not permanent, but our true selves are.

The peace that we are all looking for exists in a realm that is far beyond who we are, who society expects us to be, and any masks that we can come up with. We can choose to conform and play along with societal expectations but we will only be able to find real peace when we can pull down the walls we’ve all built for protection around ourselves.

Sometimes, we struggle so hard to be accepted by others that we pass by unnoticed.

“Your need for acceptance can make you invisible in this world. Don’t let anything stand in the way of the light that shines through this form. Risk being seen in all of your glory.” ― Jim Carrey

This is because we’ve successfully extinguished the unique ray of light that shines within each and every person. It is our duty to let that light shine as bright as possible. Carrey has repeatedly stated that he hopes people will get all that they desire in terms of material wealth so that they finally understand that money, in fact, cannot buy you the peace you are looking for.

Want to know more about Jim Carrey and his spirituality? Read Jim Carrey Is Asked If He Is Religious. His Response Is The Best I Have Ever Heard.

Carrey also confessed that he was fearful the first time he stepped out into the world with the determination to create something much larger than himself. This fear persisted till one day, a person he considered much smarter than him, told him that there is nothing larger than our own selves. He pointed out that our eyes don’t merely reflect the things we see, they also project a separate story that doesn’t quite match the one on the screen. This second story is created by the fear that no matter what we do, we won’t be satisfied. This fear keeps pushing us to achieve more and more every single day.