The Most Arrogant Zodiac Signs, RANKED 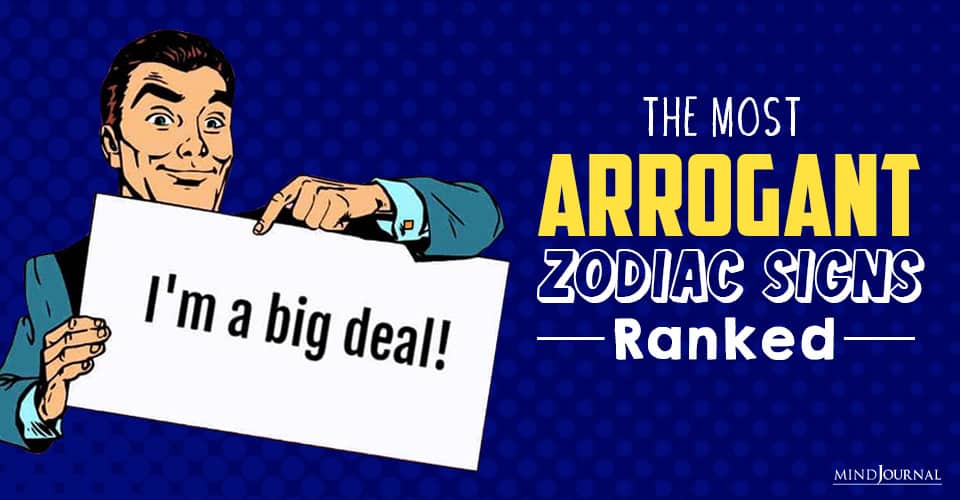 While self-confidence is an appreciatable trait to have for any human being, but for some people, this trait becomes too much to the point of being arrogant. Such people are pretty much obnoxious and self-centered. Arrogance resides in everyone’s persona to some extent and it emerges due to different situations, but there are some people who get that arrogant streak a little more than others.

Astrological studies map out the stars and their influence on us. Zodiac signs, club certain similar characteristics of the people born during a certain period of time. By following the diktats of these precious findings, one can hope to predict and affect the course of their life. Making and choosing friends and partners also becomes much easier.

This says a lot about why astrology is the major influential factor in forming our personalities, and in this case, arrogance. On the basis of these extensive astrological studies, we have come up with a ranking of arrogance displayed by the signs: Why some signs are more full of themselves comparing to others.

They are deep into their own narcissistic behavior. Anybody who has ever known a Taurus will definitely agree. They think everything is about them. If you asked them for their favorite word, it would be “me”. You cannot argue with people from this sign, because they would never own up to their behavior. It’s always the other person who is wrong.

Read: The Most Narcissistic Zodiac Signs, RANKED From Most To Least

They are artificial pricks for the greater part of the time. They have an insane power complex, where they believe that they’re the supreme commanding force. Everything they utter needs to be accepted as the Holy Truth, or you will be forcibly drowned in their temper tantrum. If you do, in fact, show them their fault, their ego will consume you alive.

They are self-sufficient in their arrogance. They do not seek your validation. They put their own selves on a pedestal and assume worshippers. They believe that they strive for perfection when they are actually just being plain annoying to everybody around them. They are negatively competitive and will cry buckets if they do not win the gold medal.

This is a clever genius. They will find out your area of interest- the subject you love- and attack you there. They will conduct extensive studies to gain knowledge about things they don’t even care about, as long as they can shove the facts in your face, and outdo you.

This is emotional manipulation at its finest. I mean, even hypnotists fail in front of them.

Is he a good debater? Nope.
Does he somehow make people cede to his point of view? Always.

They can be extreme control freaks when they are in the mood. You can always trust them to turn your own bullets back towards you.

Read: The 6 Most Cruel and Savage Zodiac Signs

They are solitary predators. Their distance can be put down to introversion, but it also reeks of superiority. They realize that they are being rude and impolite. The catch is that they like themselves that way. It does not bother them, and nobody can persuade them to change. They just don’t see the point.

They will never zip their lips until they have kick-started an apocalypse. They refuse to understand where to draw the line. If there is one thing worse than H-bombs, then it is the banter of this sign. The sad thing is, they may not be actively trying to be that way. They genuinely just like discussing themselves, and their lives. Only.

Scorpions aren’t perpetually drowning in arrogance. But piss one of them off, and they will have you swinging back and forth from the gates of Hell.

In general, they put in the best of their efforts into being nice human beings, but their moods are as stable as the water in a river. When they are angry, it is best to stay away from them. They lose complete control, and turn into the Hulk, rampaging and ruining everything in their way.

They may be quite straightforward, but they are not famous for arrogant behavior. People generally like them, so they don’t have to use force to get their way.

It happens voluntarily. Like every human being, Aries have traits too. They can be very selfish when they want to be. Do not test their patience if you don’t want to ruin their good guy act. Their manners are only for people who treat them well, and with respect.

The only time you will witness their arrogant behavior is when they are suppressing a wave of vengeful anger.

They generally avoid conflict and are too scared of facing situations to ever invite a war. They would prefer to keep their distance, nourish a grudge, than actually sorting it out. The latter would involve confronting them socially, and that is an absolute no-go for them.

Read: 5 Zodiac Signs Who Find It Easier Than Most To Let Go of Toxicity

They are like the chipmunks in movies who try to act really tough. They will say things like, “I’m not afraid of anybody”, and, “Let’s show them who is boss”, but would actually shiver to death if the chance should arise.

They are one warrior you cannot count on during necessity. His defense mechanism makes him make promises bigger than he can ever hope to deliver.

Being at the bottom of this list, you have already guessed their arrogance quotient. They are too insecure to actually believe that they are better than the vast majority of people. They are also friendly people in general and like being somebody you can easily depend upon.

If you should bully them, then they will fight for their self-respect. But under no circumstance, they will ever pour out their arrogance. They like peace, and they will, without any doubt, choose it over drama any day.

2 thoughts on “The Most Arrogant Zodiac Signs, RANKED”