The Deep Truths Of The Zodiac Signs 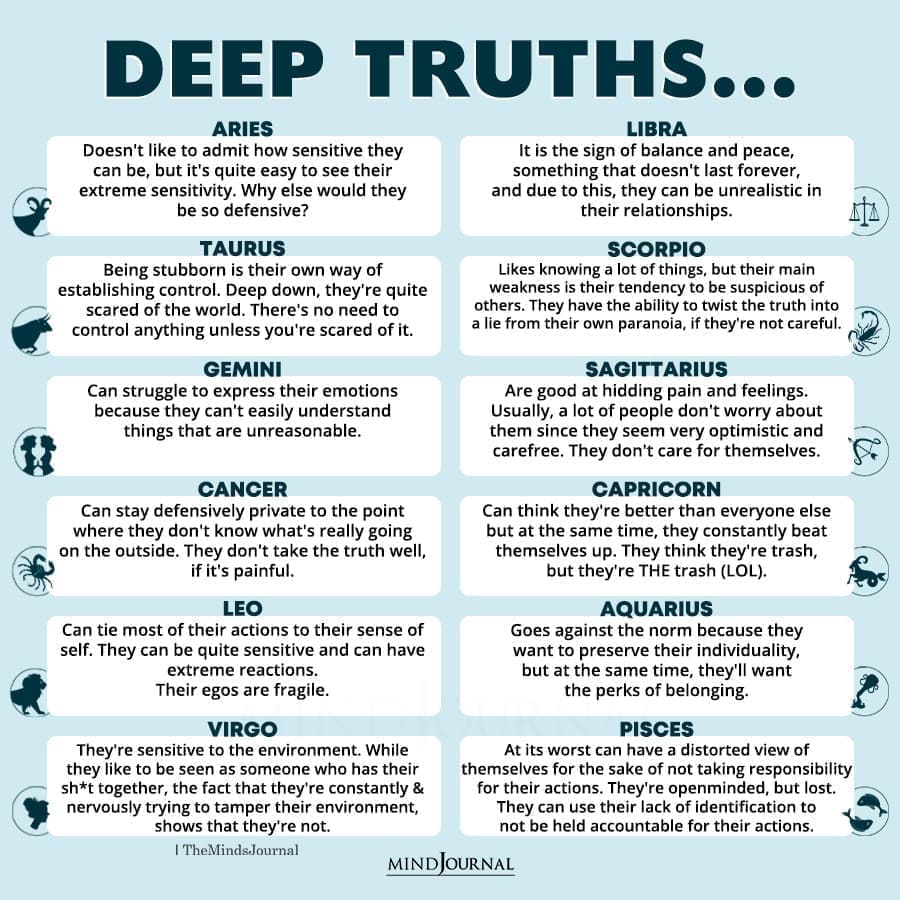 The Deep Truths Of The Zodiac Signs

Aries: Doesn’t like to admit how sensitive they can be, but it’s quite easy to see their extreme sensitivity. Why else would they be so defensive?

Taurus: Being stubborn is their own way of establishing control. Deep down, they’re quite scared of the world. There’s no need to control anything unless you’re scared of it.

Gemini: Can struggle to express their emotions because they can’t easily understand things that are unreasonable.

Cancer: Can stay defensively private to the point where they don’t know what’s really going on the outside. They don’t take the truth well, if it’s painful.

Leo: Can tie most of their actions to their sense of self. They can be quite sensitive and can have extreme reactions. Their egos are fragile.

Virgo: They’re sensitive to the environment. While they like to be seen as someone who has their sh*t together, the fact that they’re constantly and nervously trying to tamper their environment, shows that they’re not.

Libra: It is the sign of balance and peace, something that doesn’t last forever, and due to this, they can be unrealistic in their relationships.

Scorpio: Likes knowing a lot of things, but their main weakness is their tendency to be suspicious of others. They have the ability to twist the truth into a lie from their own paranoia, if they’re not careful.

Sagittarius: Are good at hidding pain and feelings. Usually, a lot of people don’t worry about them since they seem very optimistic and carefree. They don’t care for themselves.

Capricorn: Can think they’re better than everyone else but at the same time, they constantly beat themselves up. They think they’re trash, but they’re THE trash (LOL).

Aquarius: Goes against the norm because they want to preserve their individuality, but at the same time, they’ll want the perks of belonging.

Pisces: At its worst can have a distorted view of themselves for the sake of not taking responsibility for their actions. They’re open minded, but lost. They can use their lack of identification to not be held accountable for
their actions.