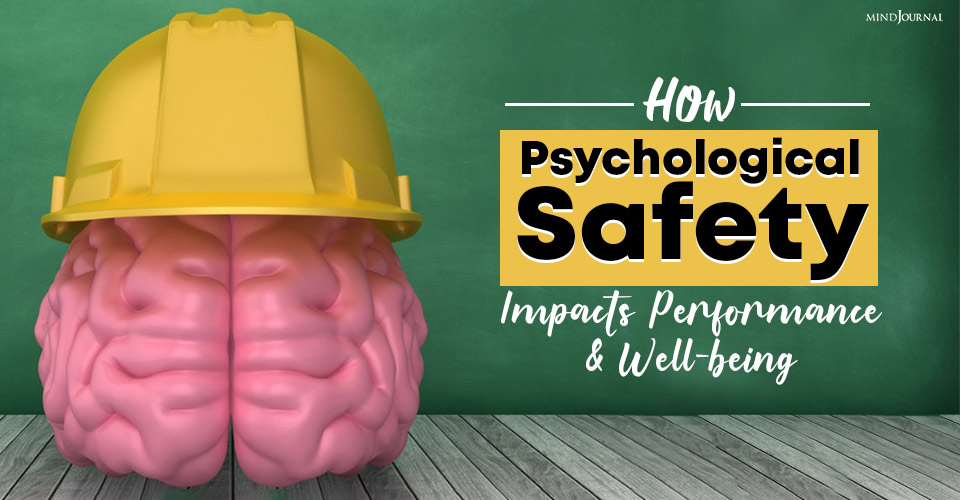 Psychological safety and confidence always go hand in hand, it is the belief that one can be themselves without the fear of judgment by others. Team members who feel psychologically safe tend to be high performers, risk-takers, and more effective at meeting goals.

The mood is the background music, the ambiance, the feeling we have about an environment. Does it make us feel productive and energetic, or does it make us feel ignored and lethargic? How do psychological safety Impacts performance and well-being?

In any team environment, one gets a sense of how people behave, how people are treated, and what is the state of morale. This all ties into the mood, which is fundamental to the acceleration of performance from average to excellent.

People often ask about the best indicators of a team’s performance. The answer seems to include the work by Prof. Amy Edmondson and her model of Psychological Safety.

The first indicator is whether or not team members are bad-mouthing management or each other. It is amazing how prevalent this is. Whether meetings happen as advertised and on time is also key. And if people do what they say they’ll do when they say they’ll do it is vital to have a healthy team. Early delivery of small promises is a very effective way to build a psychologically safe team culture.

In the Harvard Review, the Neuroscience of Trust is explained by Paul Zak. Zak is a professor at Claremont Graduate University in Southern California, who studies neural imaging of the brain at work. His research identified the role of oxytocin in developing trust. His research in the Center for Neuroeconomics Studies links how oxytocin is a primary indicator of a healthy organizational culture.

Neurological and behavioral markers of individuals in a team can be indicators if that team is likely to achieve high performance. A key behavior is a basic courtesy, which needs to be a two-way street; if it feels like one party is constantly having to initiate the courtesy, there is not a team in the true sense of the word.

And therefore, trust is paramount. A team is “formed, stormed, and normed” by the extent that trust can be earned and risks can be taken.

People need to feel it’s OK to take risks and to share an opinion that is different from the collective. Another key marker is empathy. If people feel there is no culture that is genuinely caring, there will be reduced performance.

The fourth element is energy. This is an essential ingredient in any successful team. If there is a lack of energy, there is no true team, or at least not one that is likely to achieve high performance.

Read: The Psychology Behind Sexual Attraction: How We Become Attracted

Google recently went on this journey to build the ‘’perfect team.’’ It launched the Aristotle project to find out if it can improve productivity and became fixated on building the perfect team. Google scrutinized everything!

How frequently did a team’s members eat lunch together? Did productive teams build larger networks? What were the traits of the best team managers?

During the project, it was highlighted that the executives at Google had always believed that the best teams were simply a group of the best people. But it turned out no one had really studied if this was actually true.

In this research, Google found something odd. No matter how they sliced the data, it was almost impossible to find any generic profile of that holy grail of performance and that ‘perfect team’. They kept finding that agreed ‘‘group norms’’ were instrumental in team performance. Norms are the rituals, or unwritten rules, that govern teams.

Their influence is often profound. Team members’ behavior is almost always outweighed by the group’s norms of the team. ‘’This is the way we do things around here’’.

As a lead researcher at Google explained, ‘We had lots of data, but there was nothing showing that a mix of specific personality types or skills or backgrounds made any difference.

The ‘‘who’’ part of the equation didn’t seem to matter.’ The most effective teams consisted of genteel individuals with high levels of trust, genuine empathy, and high levels of energy to collaborate and deliver results. These elements can be detected in a relatively short space of time.

Read: How To Get Rid Of Bad Habits Using Psychology: 9 Science-Backed Ways

The faith that the team will not embarrass, reject, or punish someone for speaking up is the ‘secret sauce’ that Google found. Project Aristotle concluded: They found that ‘psychological safety, more than anything else, was critical to making a teamwork’.

A key point for leaders is that the language will influence the team dynamic. Two words that can have a disproportionately negative impact on morale and performance are I and they. Thankfully, a word that can undo that damage, if adopted as a better replacement, is we.

How about a switch to a world where the only time we use I or they is to say, “I made a mistake,” or, “They did an excellent job.” Otherwise, use we to build team cohesiveness. Based on the ‘we’ cultures that build a space of psychological safety, it’s amazing what a positive impact this subtle shift can have.

Sir John Whitmore, the author of the book Coaching for Performance, references how job interference leads to lowered trust and collaboration in teams.

Integrity, discipline, and congruency are more important than ever. The virtual team environment makes it easy to forget the norms needed for teams to function. People need courtesy, trust, empathy, and energy. People perform best when the prevailing mood in their team is one of feeling psychologically safe.

Read: The Psychology Of Olfaction: How Smell Can Influence Your Mood And Behavior

Sustaining excellence in the face of constant challenge and change is a truly fascinating pursuit. It can be done if we understand how to enable a healthy climate in our teams. More than ever psychological safety is at risk when working remotely. The brain’s trust hormone (oxytocin) has all but evaporated and people feel isolated now more than ever.

Together in a psychologically safe team of trust, we can model some of the best team cultures in the world and manifest mastery in all that we do together. A classic that many teams are reading together in this ‘new normal’ of isolation is the book by Thomas Merton. It is the book, No Man Is An Island. What will help you feel more connected? What can you do to build psychological safety in your team?