Why Married Couples Are Not Good At Sexual Communication 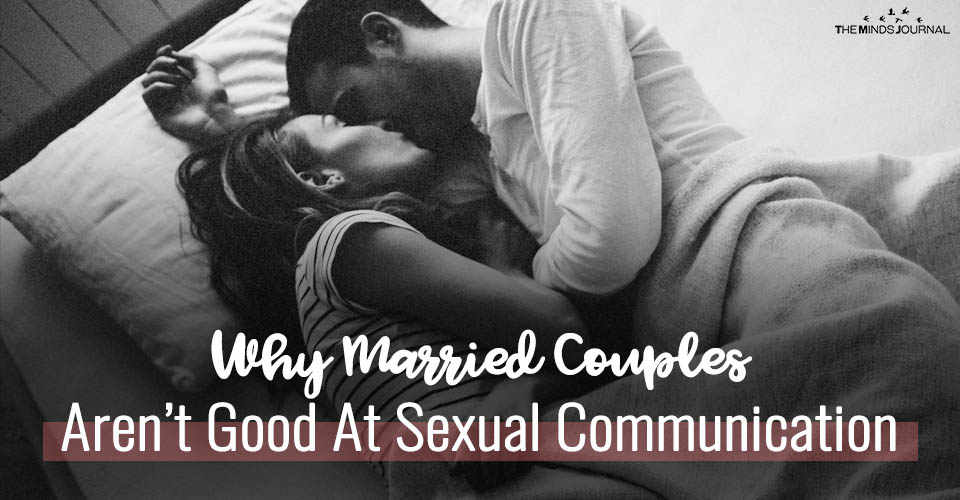 New findings show that sexual communication skills are not related to marriage.

Talking sincerely and transparently about sexual issues can be hard. Many people feel embarrassed or humiliated to request what they need explicitly, regardless of whether they’re in a caring relationship.

There are many explanations behind this. Many cases include one or more of the following reasons for low levels of sexual communication skills:

1. Many people grew up with the message that sex is “dirty” or that it is rude to discuss sex.

3. Many are also worried about how their partner will respond to their requests.

Yet others might have been with their partner for a considerable length of time, but they still don’t have the foggiest idea how to bring it up.

It is very common to think that marriage and long-term commitment are the ultimate solutions to these problems. After all, marriage is assumed to provide a safe space to talk about any issue. Moreover, many people think that skills are acquired with time, hence commitment is important and marriage secures a long enough period of time to work on these issues.

New Findings Show It Is Not About Commitment

However, new findings from the German Pairfam study show that it is not so simple. Time and commitment are perhaps important in many other fields, but they are not so important when it comes to couples talking about sex. The study addressed a simple question: Does marriage have any correlation with improved sexual communication?

The answer is actually a resounding no. Findings reported in the Journal of Sex Research show that married people reported lower rates of sexual communication skills than most groups.

Sexual communication was a constructed variable composed of the answers to the following questions: “If I want something different during sex, I say or show it” and “Generally speaking, I can express my sexual needs and desires well,” based on the scale of Plies, Nickel, and Schmidt. These two items were combined by the survey’s team to create a scale ranging from 1 (not at all) to 5 (absolutely) with half-point levels.

To understand these results, one needs to understand what sexual communication is and why it is so important.

Why Is Sexual Communication So Important?

Do you want your sex life to be more interesting and exciting? Read Sexual Intimacy: Mastering The Art of Subtle Seduction

Why Are Married Couples Not Great at Sexual Communication?

It is very common to think that good communication skills take time and effort. We learn each other’s needs over time and become skilled in expressing our needs after investing more and more effort into it. So, marriage should be perfect for developing sexual communication skills, right?

Apparently not, it doesn’t work like that. One can only speculate why, and future studies should continue investigating this. The first possibility is that the average length of marriages is longer, thus we see a diminishing marginal effect, as several longitudinal studies show in researching other effects of marriage over time. This means that with time, the will and passion to invest in asking what you want to decline. Hence married people report lower levels of sexual communication skills over time.

In any case, it seems that being alert and fresh is more important in developing good sexual communication skills and feeling good about what one wants. Unmarried couples and singles do this naturally, and apparently they have something to teach their married peers.

Ménard, A. D., & Offman, A. (2009). The interrelationships between sexual self-esteem, sexual assertiveness and sexual satisfaction. The Canadian Journal of Human Sexuality, 18(1-2), 35-45.

Sexual communication can be a bit dicey sometimes because a lot of couples hesitate to be that open. But, remember that it plays a very important part in determining whether your conjugal life turns out to be a fulfilling one or not.

If you want to know more about sexual communication and how to be better at it, then check out this video below:

Elyakim Kislev received his Ph.D. in sociology from Columbia University and holds three master’s degrees in counseling, public policy, and sociology. He was awarded the U.S. Department of State Fulbright Fellowship and the Award for Outstanding Fulbright Scholars. Currently, Kislev is a faculty member in the School of Public Policy and Government at the Hebrew University. Kislev is the author of Happy Singlehood: The Rising Acceptance and Celebration of Solo Living, published by University of California Press, which was featured on newspapers, magazines, radio, and television, including BBC, Huffington Post, Bloomberg, Vice, Metro, Globe and Mail, New York Daily News, and many more. He published various academic articles on the subjects of singles and solo living, immigration, social and educational policy, ethnic minorities, and group therapy.View Author posts