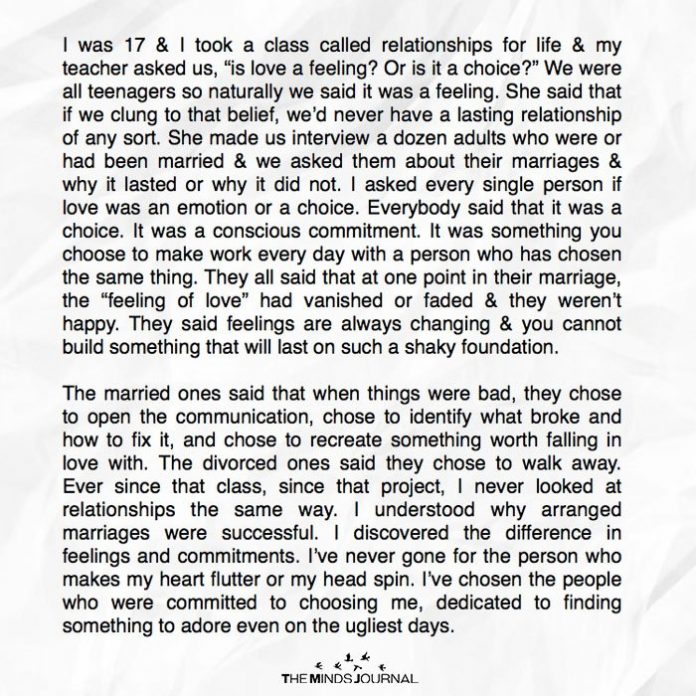 Is Love A Feeling? Or Is It A Choice?

I was 17 I took a class called Relationships For Life and my teacher asked us, “is love a feeling? Or is it a choice?” We were all a bunch of teenagers so naturally, we said it was a feeling. She said that if we clung to that belief, we’d never have a lasting relationship of any sort. She made us interview a dozen adults who were or had been married and we asked them about their marriages and why it lasted or why it failed. At the end, I asked every single person if love was an emotion or a choice. Everybody said that it was a choice. It was a conscious commitment. It was something you choose to make work every day with a person who has chosen the same thing. They all said that at one point in their marriage, the “feeling of love” had vanished or faded and they weren’t happy. They said feelings are always changing and you cannot build something that will last on such a shaky foundation.

The married ones said that when things were bad, they chose to open the communication, chose to identify what broke and how to fix it, and chose to recreate something worth falling in love with. The divorced ones said they chose to walk away. Ever since that class, since that project, I never looked at relationships the same way. I understood why arranged marriages were successful. I discovered the difference in feelings and commitments. I’ve never gone for the person who makes my heart flutter or my head spin. I’ve chosen the people who were committed to choosing me, dedicated to finding something to adore even on the ugliest days.

The Ones Who Notice The Storm

They're there to be with you through the worse days.
Read more
Love Quotes

Each Of Us Is A Story

Maybe you'll find yourself in the next chapter of mine.
Read more
wpDiscuz
23
0
Would love your thoughts, please comment.x
()
x
| Reply