A Secret To Unlocking Growth Mindsets 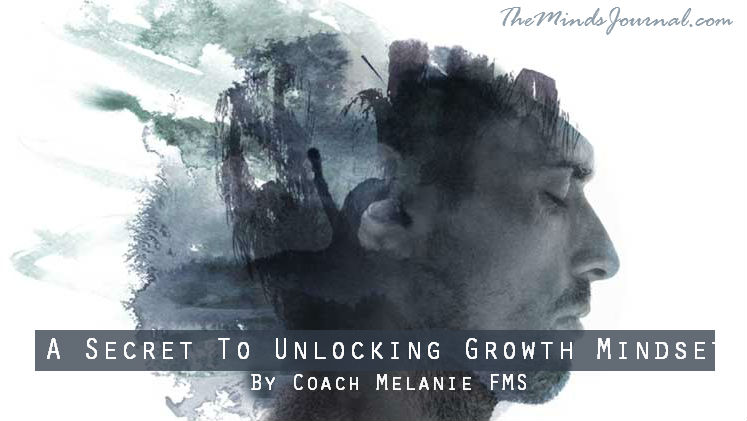 “…Difficult and easy give rise to the same concept; Long and short are derived by comparison; High differs from low only by position; Sound and echo blend into one harmony; Front and back follow one another sequentially.” — Lao Zi, Chinese Philosopher, Father of Taoism

It is true polarities cannot exist without their relative opposing counterparts.  The dichotomy between positivity and its lesser liked sibling, negativity is no different.  With humans, shame, guilt, defeatism and fear are borne out of negative mindsets all us individuals cycle through from time to time.  It is an innately human experience. One that in very small doses may serve to prove a purpose yielding positive results.  Namely, realized self-improvement goals and actions, higher gratitude, insight and clarifications. We need a little black to show the white of light, be grounded to become more elevated. For many people, the true danger lies not in entering a negative headspace, but becoming trapped in one- further spiraling down the rabbit hole. Cruelly ironic, in this way they grow lost in the process of their emotional, mental and/or spiritual processing that is so similar in nature to healing and advancing introspection.  Unable to clearly identify what is constructive reflection from what is destructive reasoning, and cutting themselves off from their paths forward, onward and upward. One such realization to unshackling ourselves from prolonged and self-sustaining negative mindsets is:  Active-Proactive, Release or APR.  (Easy mnemonic:  Think short for April.  Springtime.  A season for growth and renewal.)  Together these 3 words unify a well-being thought script approach to stepping out of a negative space and entering into a more positive, growth mindset. Thought scripts are stories we are told, tell ourselves and come to believe over time. This subconscious, mental programming translates into beliefs which in turn guide our actions, decision-making and emotions. Whether expressed internally or externally, negative thought scripts possess disempowering and restrictive language.  This is where the “can’ts”, “musts”, “need to’s”, “have to’s”, “shoulds”, “shouldn’ts” and all their fixed counterparts seek to play. Breaking down the elements unifying APR, elements which together remove the blocking and circular thought patterns of a negative tailspin emerges, Active desires, Proactive action and Releasing/reclaiming language.  We have all heard dissatisfied commentary like: “I really need to stop biting my nails, it’s a nasty habit!” – OR – “I should break myself out of the bad habit of biting my nails.” And, that’s just what we say aloud.  Our inner voice is often much more harsh. With that in mind, an alternative APR Thought Script of this same scenario may sound more like: “I love my body (active desire) and will care for (proactive action) my hands by no longer (release) biting my nails.” This is the flow of a growth mindset.  It does not aim for perfection, nor is it necessarily grand in nature.  And, neither is it rooted in guilt, shame or obligation. But, rather in love, acceptance and an intent to thrive and develop further. Active desire, proactive action, release and reclamation are the tools and motivating force which drives the building blocks of APR:  the where, what and how: WHERE- Identification:  What’s the saying?  Knowledge is power?  Naming and acknowledging our emotional and spiritual chambers, knowing what kind of headspace we are in is the bedrock for APR.  It may start out as a vague awareness that we are out of balance somehow.  Or, we have gotten caught up in maddeningly mulling over a thought or problem, but to no avail.  Often the last piece of the process, clarity of self and situation comes after you release. WHAT- Choose:  Wonderfully, the “what” is also the “who” here.  In taking that step to make the empowering choice and mindfully rewrite our own inner thought scripts with ones that are lovingly, supportive and fruitful we have selected ourselves!  We’ve concluded that we are worthy of the time and energy it takes to positively re-parent ourselves.  And, why not? HOW- Do:  Starting the practice of mentally and/or physically (affirmations, mantras, meditations) re-writing harmful thought scripts with APR and continuing our journey of personal growth through deprogramming. Forward thinking and loving intention are some of the many benefits of infusing your active desires with proactive action, and releasing harmful and negatively fixed language from your personal commitments, thoughts and beliefs. With all great approaches Active-Proactive, Release is even better shared; it does takes time, the practice of self-love and repetition. Release your old restricting beliefs and embrace your new truth actively and proactively!

Certified Well-Being Life Coach, Digital Coach, Intuitive Advisor, parent, writer and blogger on “The Process of Life” and founder of Forward Muse Solutions. Melanie enjoys tending to her garden, having stimulating exchanges with friends and strangers, dancing whenever and wherever she can. And, learning, growing and loving with her amazing teenage son. Learn more about Melanie Christian at: www.forwardmusesolutions.comView Author posts