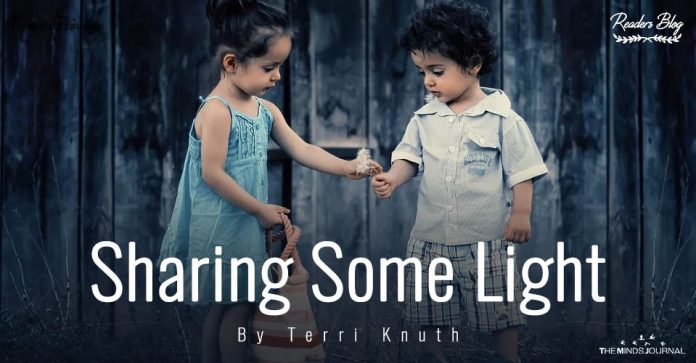 A man shared with me an experience he had as a child, wherein his mother, while making his birthday cake, told him that it was “his” cake that she was making.   And when it came time at the party to cut and share the cake with everyone, he threw a fit because his mom had told him it was “his” cake and nothing in him wanted to share it.

That man remembered, at that time, nothing in him wanted to share that cake with everyone.   Yet he was told that he “needed to share”, so there was a contradiction that started in that child.   “I’m told to share, but I don’t want to share.”  Or otherwise stated “I’m a good boy, if I share.  I’m a bad boy if I don’t”.  And sometimes punishment ensues until that child does what the parent wants them to do….share, like “good boys” do.  But if that child is punished for not being “a good boy”, can that child believe anything other than the fact that he must not be good?

At that moment, if you can see it, that boy then starts a pattern of directed “hate” toward others (brothers, cousins, friends), because they are being given something that he believes belongs to him (“his cake”).

This is how Guy Finley (a truth teacher), put it so eloquently: “The child then feels that he must be broken, because everyone seems to agree what a good person is, and nothing in me wants to do that (share), so I’m not good.  I’m broken and now I must pretend to be good.  Not because I want to do it, but if I don’t pretend to be “good”, if I don’t adopt an appearance to push away the storm, then I’m going to be washed away with it, and I’ll be bad for the rest of my life, and I’ll never get cake again.   I’ll never be praised.  I’ll never receive an award.  Everything about my life will be because I’m a bad person, a broken person, and even though I don’t feel it, I’m going to act it out.”

Wow, I can see my whole life in that. Why?  Because we are all a product of borrowed, hand-me-down parts, from our parents, society, grandparents, all the way back.  Our parents and grandparents, etc., had no idea that they were carrying and bringing that “old” borrowed stuff with them and placing it upon the “now” believing the “old” to be “new”.

Here are a few things that occurred to me in considering the idea of sharing:

1. The best way to lead is by example. You can’t expect a child to do something that you first don’t uphold yourself.

2. Real/True Love is “unconditional”. Therefore, any action that we agree to take based on what our mind is saying “needs to be changed in our child”, must be dismissed in that moment because it comes from the past.  The past is where the ideas of what is “good” and what is “bad” come from.

3. The present moment is the only place where “new” answers exist. Those answers come to us only after we dismiss, sacrifice, that “old” instantaneous voice that pushes us with a response in the moment.  We have to wait in the moment for the past to pass, if that makes sense. And a lot of the time, that is not necessarily easy to do because it requires a bit of suffering on our part.

4. We all have an internal compass that automatically knows, without thinking, what is right and what is wrong. We know, without thinking, that harming another isn’t right.  We know, without thinking, that taking something from another isn’t right.   But that internal compass has to be allowed to awaken inside of us in its own time.  Otherwise, pretense will always be the result, and pretense is pain.  We have to allow our children to “miss the mark” time and time again and learn for themselves in the only way they can – through experience.

In all of this, please know that I am not saying that certain recognized dangerous behaviors don’t need addressing.

If we are totally honest with ourselves, the most difficult part of allowing a child the time they need to learn these things for themselves, is that we, as parents, do not want to be seen and judged by others for having a child that “doesn’t share”, or “takes things from others when playing”, etc.

There is always a cost in doing the right thing.  That cost is the sacrifice of these precious images we have of ourselves that don’t want to be seen in a negative way by others.

Image courtesy of Bessi on Pixabay