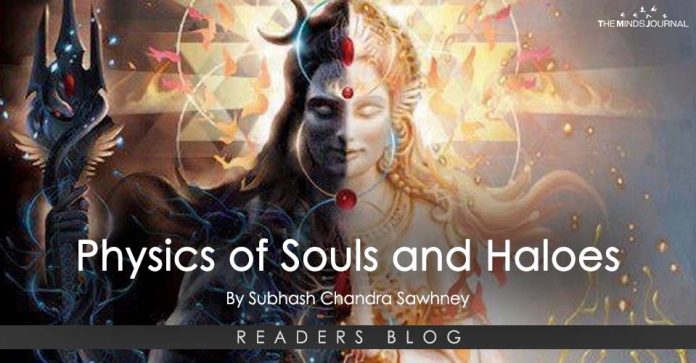 Physics of Souls and Haloes

To talk about the physics of the souls and the haloes is just like talking about the terrain of the rear side of the moon.

But, now, we are in a position to talk about even the terrain of the dark side of the moon also, isn’t?

Just think, if materials may have negative moduluses, why we should doubt that anything may not have such properties as having been spelt out in Shrimad Bhagwat Gita for the souls, such as:

None of any 3D objects conforms to any such specifications.

So, it remains to be seen whether souls could probably be 4D or 5D objects – we don’t know.

But we know that

All of such things can be explained only in a manner that the souls of the people whom such children may have been thinking should have been their kith and kin should have taken a photo-copy of the things related to them and should have implanted the past-life memories of such people in to their memory at the time of their birth – no other way.

So, it does not make sense disbelieving the existence of the souls.

The same way it looks, though, we can’t see haloes with our eyes there are so many other things that are also not visible – yet we never doubted their existence.

Why scientists do not accede to the existence of haloes

If we looked at the following photo, it inspires confidence that it may be wrong to think that haloes may not have a physical existence.

It is a photo of Akaba Yashara’al, which shows a rainbow type of halo around his head.

But the fact is – our brain can produce only either alpha waves or beta waves or, at the best, theta waves and delta waves, not any light-waves as such.

Even if these waves should have been luminous, their luminescence could not have pierced through the skull that surrounds the brain from all sides.

We can’t think of any possibility of such haloes being seen the way we see glow-worms emitting light through a chemical reaction of certain enzymes with oxygen, either.

For instance, is it not true that we can see things in the form of dreams even with our both eyes closed when we doze off?

But, as we know, we can’t take photographs of what we see in the dreams.

So, we may write it off from our present context.

The last resort left out for us is to check whether our souls have to do something with the haloes.

In the normal course, we have to agree that if a camera should have been able to capture the presence of a halo around somebody’s head we have no business to disbelieve the possibility of the physical existence of any such thing.