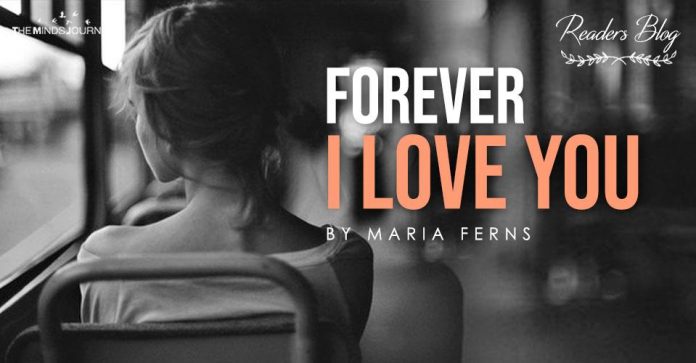 Forever I Love You

She sits near the window staring at the sky.

Clouds moving & playing hide and seek with the moonlight.

As the clouds passing by her thoughts nudge her memory & he was in her mind.

She assumed their love was strong, still thinking what went wrong.

She trusted him over herself, always thought he would never leave her.

Her love was true, she trusted you.

Never thought she would ever be away from you.

When you said, “I love you” – She believed you,

When you said, “I would always make you smile” – she believed you.

When you said, “She was the person you want to spend your life with” – She believed you.

But when they parted ways, she never thought the love they had would fade.

Now she knows why they say, “Trust is never to be broken”.

Moving on is difficult as everything she hears seems fake.

She thought you would miss her as she did, she realized she a kid.

Thank you for proving her wrong, in return making her strong.

“Love is beautiful” forever it stays; blaming “love” is a real shame.

Her love for you will never change, even though for you it just a game.

You make think she is crazy, “what is love?” she understood because of his theory.

She closes her eyes and makes a wish, “Happiness is all she asks for him”.

Do you believe that children fighting is completely wrong, and anytime that happens, grown-ups should intervene immediately?
Read more
wpDiscuz
0
0
Would love your thoughts, please comment.x
()
x
| Reply