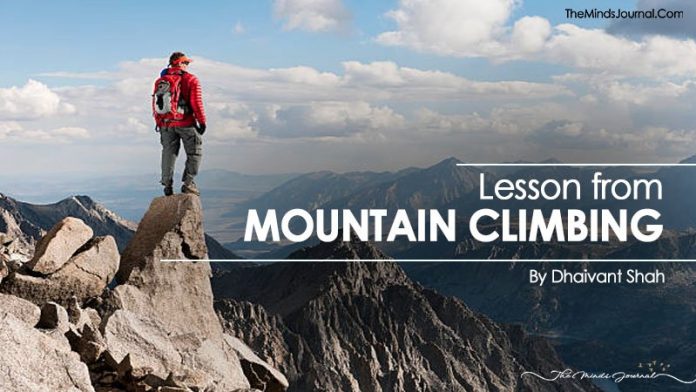 We all have read many articles stating lessons and I totally agree that we learn to keep going, start believing in our self, you grow out of your comfort zone and various other. I learned a different lesson. I learned, that process is more important than destiny.

I have gone on 4 treks and all of them were about climbing mountains. In treks, 80% of the time goes in climbing the mountain and after reaching the top, you get to spend 20% of the time at your destiny. On the first trek, I climbed the mountain, reached the top, embrace the beauty and returned back. It was not fun. Due to which I thought that how people are having fun and keep going on treks.

Then, I went on the second trek and observed people enjoy the journey. That journey can be of heavy rains, low lights, bright sun but people focus on that they are on break from routine and not on difficult things.

After that, I went on Roopkund trek, the longest trek of 8 days. The goal of the trek was to reach Roopkund lake after 5 days of the climb and we stayed for maximum 60 minutes at that point. This trek was so much better than both the above treks, not because of Himalayas but because of efforts. In that trek, I started communicating with people, playing games, participating in activities and listening to myself. Due to which, the whole journey became a memorable one.

When I applied the same logic to my other goals of career and hobby, it made me realize that enjoying the journey is the most important part. I took up a guitar and started learning from the internet. I told my guitarist friend that I play guitar every day for one hour. Still, I can not play that rhyme. He told me don’t practice as a compulsion, enjoy playing guitar and music will flow. At that time I did not agree with him. After some time, I started losing interest and it slipped out of me.

I could not survive the first quarter of the process because of the lack of fun. I picked up editing pictures and videos, mostly pictures. In that process, I don’t produce something flawless but yet I have fun with the process and outcome. So I conclude that start enjoying the process, otherwise you can not survive the initial part of it. Even if you reach destiny, it will not be satisfactory.