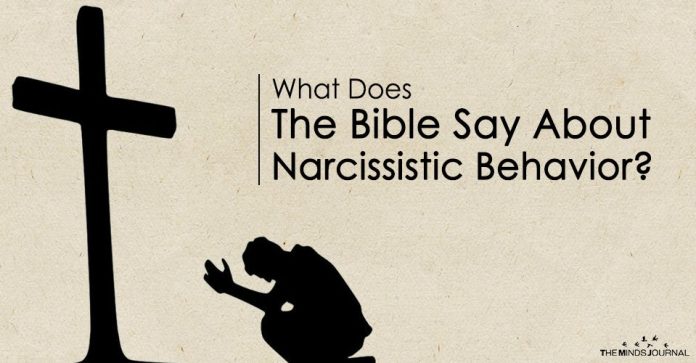 What Does the Bible Say About Narcissistic Behavior?

PEOPLE WILL BE LOVERS OF THEMSELVES

Narcissism is addressed in the Bible in Paul’s second pastoral epistle to Timothy (2 Timothy 3:1-7) in the fall of A.D.67.  Paul seems to be concerned about the character and behavior of leaders within the church, so he warns Timothy to beware of those who act out of a “self love attitude”.  He says, “But know this, that in the last days perilous times will come.  For men will be lovers of themselves, lovers of money, boasters, proud, blasphemers, disobedient to parents, unthankful, unholy, unloving, unforgiving, slanderers, without self-control, brutal, despisers of good, traitors, headstrong, haughty, lovers of pleasure rather than lovers of God, having a form of godliness but denying its power.  And from such people turn away.”  Here Paul names many of the attributes associated (in psychology) to-day with the narcissistic personality we are all becoming so familiar with.

In Psychology, the term “Narcissism” was first introduced by Alfred Binet (sexologist) in 1887, however, its usage today has grown more from the notions of Freud’s work in 1914.   Mankind has been interested in all aspects of mental processes and behaviour over many millennium, as far back as two thousand years ago the Ancient Greeks explored the meaning of the mind through the myth of Narcissus.

Contrasting the Bible with Psychology:

Let us take a few moments to contrast and compare what St.Paul says to Timothy two thousand years ago with today’s psychological understanding of what narcissism is:-

St. Paul says: “For men will be lovers of themselves”

Psychology says: The narcissist form of self love is not a healthy one, as they are really full of self-hatred and self-loathing, which they must disown.  Unable to love their True Self, they fall in love with a reflection of themselves (False Self).  It is through this projected image that a narcissist is able to generate the much needed Narcissistic Supply that they crave for their very survival.  When I speak of  “Narcissistic supply” I am referring to whatever feeds the appetites of the narcissistic defenses, whether that currency is Primary or Secondary Supply.

Psychology says:  The narcissist needs money to maintain the false image and keep them on the pedestal they put their selves on. Money is the enabler that allows them to surround themselves with symbols of wealth; the flashy car, the big house, the clothes etc.  Wealth to the narcissist portrays both psychological and financial power, putting them on a pedestal of “greatness” where they can be worshiped by everybody, including themselves.  They are addicted to adoration and attention, money buys that for them.  Because the narcissist grew up feeling deprived of love, they are always seeking love substitutes, and money represents that love that they constantly seek.  Money, and their attitudes to it, affects all of the narcissist’s relationships.  For example, it is a useful commodity for cajoling and seducing people as a source of future narcissistic supply.

The narcissist use their open display of money in order to get social approval, this often adds to their sense of entitlement.  That sense of entitlement often leads them to feel that they are also entitled to other people’s money, they will use any means for extracting what money they can from others.  Their grandiose fantasy leads them to believe that they have more money then they really have, and this often lends them to spend recklessly.  Money is also useful when their frail ego takes a blow, when this happens they are likely to go on compulsive shopping sprees to comfort and calm themselves.  Overstretched and in dept, they are always looking for ways of making more money, so they will hound people, or even commit financial crimes in order to get it.

Christine Louis de Canonville
B.A. (Hons) Theology & Psychology, MIACP, MSIACP, CMH, CHyp, MPNLP. Christine Louis de Canonville is a licensed psychotherapist and clinical supervisor living in Dublin, Ireland. She is also an author, a professional trainer, and international speaker, a lecturer, workshop facilitator and external examiner.nbsp;She has worked in the area of mental health and trauma recovery for the last 28 years, providing psychotherapy to children and adults for a range of life issues, including Addictive Behaviours, Anxiety, Anger, and Relational Issues.
-Adverts-

Codependents’ reactive role amplifies their focus on their partner, while they hide who they are. They increasingly try to control the uncontrollable, sacrifice themselves, and try harder to please and be accepted.
Read more
wpDiscuz
4
0
Would love your thoughts, please comment.x
()
x
| Reply