Why We Need To Stop Calling Authentic People “Rebels” 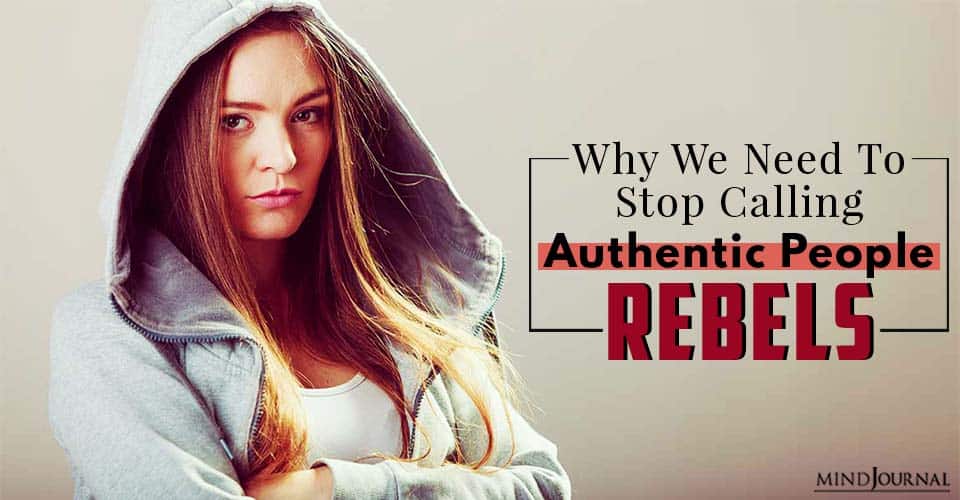 Do you see someone following a unique path and call them a rebel? It’s time to recognize them as genuine selves and stop labeling them as a rebel defying authority. It doesn’t do justice to their achievement and power. Read on to know why…

Like the words “addict,” “gangster” “radical” or “warrior,” the term “rebel” seems to get thrown around quite a bit in our everyday lingo. The technical definition of the term refers to someone who stands in direct opposition to authority such as a government. This opposition is often violent as a rebel may have the intent of overthrowing authority.

And there are certainly many people in the world who intentionally challenge societal, economic, and political authority. But over time, the term “rebel” has become more ubiquitous, referring to anyone who follows a unique path.

As an example, people who are “authentic” are often labeled as “rebels” or “rebellious.” In theory, an authentic person is someone who thinks and lives in a way that is true to themselves and their beliefs, regardless of whether they cater to conventional societal norms. And it is no doubt true that most “rebels” are authentic in their beliefs and behaviors. However, not every “authentic” person is a rebel, nor should they be referred to as such.

To be sure, applying the term “rebel” to people who lead authentic lives is often intended as a compliment. After all, finding a path to living in a way that is consistent with one’s own values in the face of societal pressure to live otherwise takes a great deal of courage, determination, and fortitude. And these can be the same admirable qualities that make someone a “rebel” in the more technical sense of the word.

Is it wrong to call someone “rebel”?

Sometimes calling someone a rebel is not intended to be so positive. The term can be meant to suggest that an individual is somehow subversive to authority when they are simply being true to themselves. The implication can be that this person is a threat – perhaps even dangerous and violent – because they do not conform to societal standards. Thus, by using the term “rebel,” people who are minding their own business trying to live their lives are suddenly societal threats.

But regardless of whether the term is intended as a compliment or not, calling someone a rebel is limiting because it is a stereotype. When we refer to someone as a rebel, we are defining them not as individuals, but as individuals understood only in a stereotypical social or cultural context. In doing so we ascribe intentions and motivations that may not be present.

And that individual can thus no longer understand and represent themselves on their own terms, but rather only in the context of someone else’s arbitrary societal terms. Rather than focusing on following their authentic path where it may take them, they are restricted to being understood within the limits of an arbitrary societal construct.

Our tendency to label people as “rebels” seems particularly acute when we describe children and adolescents growing up. Movies such as Rebel Without A Cause (1955) are embedded in societal consciousness and in theory capture “teenage rebellion.” But as depicted in the movie, often what is labeled as rebellion is just a teenager struggling to understand and assert their own authentic self.

And to be sure, most kids at some point defy authority. It’s hard to be independent without at times bucking the system. But that does not mean that the intention of the belief or behavior was challenging or overthrowing authority. It’s often just kids figuring out who they are and what they want to do in life.

Also read 50+ Eye-Opening Quotes About Living In The Matrix

This issue often comes up for people who embrace non-traditional cultures. For example, people in the heavy metal community are often labeled as “rebels” because their interests diverge from conventional norms. But just because someone likes to wear black or likes loud music when others don’t doesn’t make them a rebel.

If a kid likes Iron Maiden and wears an Iron Maiden jacket to school, they are not being “rebellious” just because other people don’t like it. This often is the beginning of the often unfounded stereotype of heavy metal fans as being dangerous and violent.

Similarly, a lifelong heavy metal fan doesn’t become a “sell-out” who is disavowing their “rebel” roots just because they eventually have a successful conventional career and family. They weren’t necessarily a “rebel” when they were a kid, so they didn’t stop being a “rebel” now as an adult. The whole time they are just a person trying to live their best life.

The further risk of stereotyping someone as a “rebel” is that it puts them in a position of having to react to authority when they may not have done so otherwise. I have been thinking about this issue since my conversation on The Hardcore Humanism Podcast with Sean Long of the heavy metal band While She Sleeps. Long described being criticized and even bullied as a kid because of his passion for heavy metal music and his band. This resulted in Long being angry against his teacher, even saying this brought out a “a little bit of that rebel” against “the system.”

But in listening to Long we get a distinct impression that he was just trying to do his thing and be his authentic self. He wasn’t challenging authority. Authority was challenging him. We have seen similar dynamics in the past, where heavy metal bands were not being “rebels” per se but were being attacked for expressing their authentic art. This can have serious consequences, as was the case in the ’80s with the Parents Music Resource Center (PMRC).

The PMRC sought to label heavy metal artists such as Twisted Sister as spreading dangerous, violent material to children, and censor their art. Similarly, the stereotype of heavy metal music led to heavy metal band Judas Priest being blamed and brought to trial for a fan’s suicide.

This brings up the other risk of labeling people as “rebels.” It focuses attention on the individual who is trying to be authentic as the problem, rather than on the possibility that there is something problematic with the way our society functions. For example, why are we so threatened by people who are different? Why do we reject artists as dangerous because they do what artists are supposed to do, which is express to themselves and offer a broader view of the world?

As a society, we certainly enjoy the fruits of the labor of people who are divergent thinkers who improve society with their creativity and innovation in technology and business. Wouldn’t we be better served to embrace authentic people as part of the norm rather than a threat to authority?

So, if someone is consciously and intentionally rebelling against authority, and calls themselves a rebel, more power to them. Challenging social, economic, and political norms can be a productive part of a dynamic, vibrant society. And if that is how someone understands their authentic self – as being a challenge to that authority – then as far as I’m concerned, they are a rebel.

But the next time we see someone who is being authentic, and following their own unique path, maybe we can think twice before reflexively seeing them as defying authority and labeling them a rebel. Embrace their authenticity and support them wherever their path may take them. And if someone calls you a rebel, you can tell them: