Why You Should Fear The Narcissist’s Smear Campaign: 5 Reasons 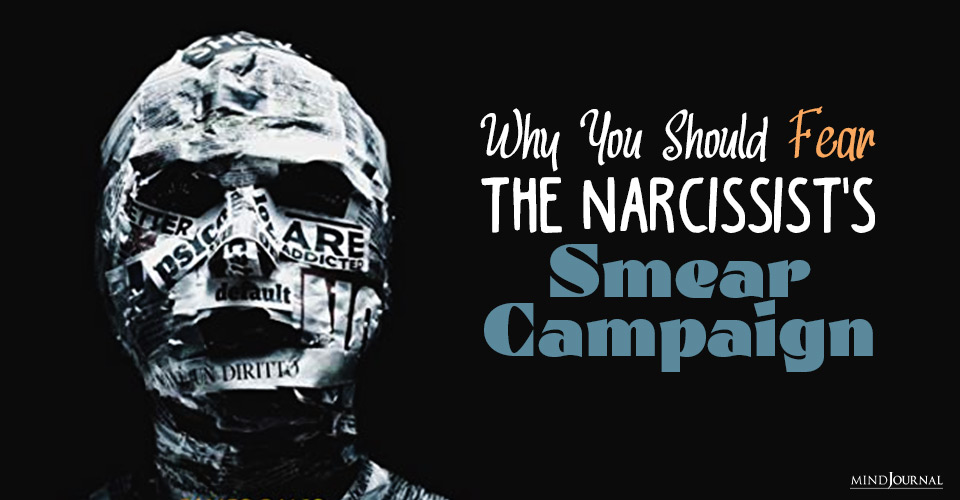 Narcissists engage you in their smear campaigns because while you may not want to be with that narcissist anymore, they do not want you to be with others also. This suits them as they have already plenty of supporters and assistance with their fabricated stories to devalue you.

It is highly likely that you have been on the receiving end of a smear campaign. It is unusual if such a campaign is not used by our kind when dealing with the person who holds the position of the primary source of fuel.

The benefits of instigating the smear campaign are numerous and indeed in many instances, the smear campaign is a necessary device for the maintenance of appearances, fuel, and control. Since we narcissists are creatures of the economy when it comes to the expenditure of our energies we operate those manipulations which are the most rewarding in terms of energy versus effectiveness.

Smear Campaigns Rank High On Such A List And This Is For The Following Five Reasons.

The smear campaign is rolled out in a convincing fashion. It is done with speed, it is done for the most part without your knowledge and it is affected by us in a manner that suggests that our words are undeniable truth. We are very good at persuading and portraying something as correct and the truth when it is not. We will seize on some element of your behavior, some aspect of actions on your part, or things you have said which are recognized by people.

Perhaps you once got drunk at a party and kept falling over (it was a one-off and not helped by the fact you hadn’t eaten beforehand the copious amounts of alcohol we plied you with) but this forms the basis of creating a picture of your abusive alcoholic actions.

You may be known for getting over emotional, especially when tired and therefore the picture is painted of you as histrionic. Taking some germ of truth and then applying it out of context, exaggerating, and magnifying is a skill we utilize in the creation of the smear campaign.

“Yes, I am afraid I am at my wit’s end with Jenny, her drinking is out of control. I have kept a lid on it so far for your sake, I didn’t want you upset, but I do not know what to do. Do you remember that party at Jonathan’s? Yes, that’s right when she could not even sit up, that’s a nightly occurrence now.”

Related: Why Narcissists Use Stonewalling As a Nasty and Powerful Defence Mechanism

We speak with such conviction and confidence that people do not challenge what we say. People usually accept the truth of what they are told by other people. This is a necessary social device because if it was to the contrary nothing would get done if people were suspicious and question everybody’s motives and comments.

We play on this default setting and our confident and superior nature allows us to create a convincing smear campaign and thus guarantee its effectiveness.

Our façade of respectability that we have carefully created whereby we are seen as good, reliable, dependable, and kind to the outside world provides us with serious support when doing out a smear campaign.

In the similar way by which we point to evidence of your drink problem, temper tantrums, and neediness as the basis for a much larger and wide problem, we rely on the existence of the constructed façade to demonstrate that we are not the issue.

How can we be? We are seen by your friends, the neighbors, and your family as that generous, pleasant, and helpful chap who must be a good husband and father. He always says hello, is polite, holds down a good job, is seen out and about in the community, and so forth. The creation of the façade is not only important for us to draw fuel; it is a fundamental part of why our smear campaigns are so effective.

3. You Don’t Help Yourself

You fall right into our trap with a lot of your behavior when you discover that you are being smeared. Rather than consider obtaining some independent and impartial evidence which you present in a calm and measured manner, allowing people to reach their own conclusions, you charge around, wild-eyed and upset, declaring repeatedly that