3 Main Reasons Why Guys Ghost and How To Recover 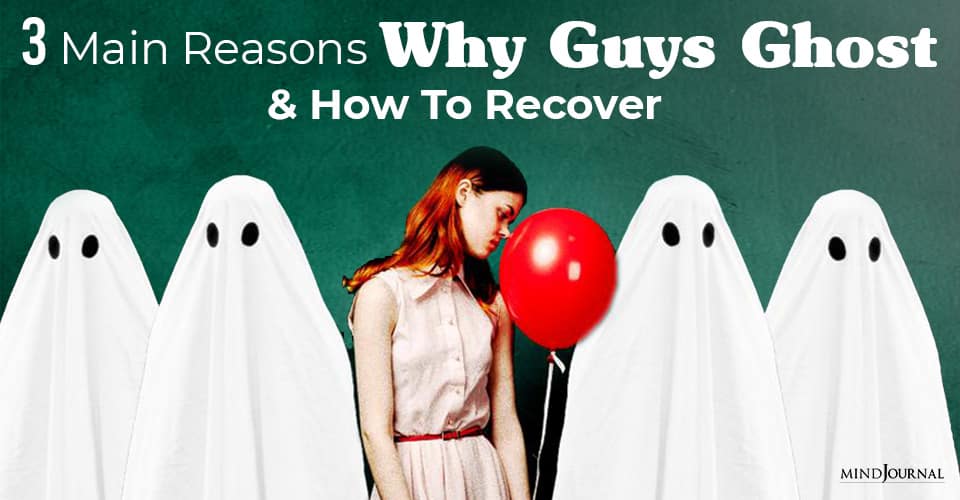 Ghosting is the new “calling” to break up with someone. Isn’t it funny that calling to break up was once considered bad form? If a guy did that in this day and age, he would be awarded some gentleman certificate or something. That sort of thing doesn’t really happen, and if it does, it’s an exception, not the rule. Here’s why guys ghost and what you can do about it.

My favourite ghosting story happened with a guy named Kurt. We dated for a few months, and all seemed to be going well, but then he totally vanished. But then he resurfaced a few weeks later! However, he resurfaced by mistake. You see, he accidentally called me thinking he was calling the new girl he had started dating! He immediately hung up when he realized his mistake and was never to be heard from again.

Now for long-term relationships, you should expect an actual breakup conversation. Although I’ve seen plenty of those end with the guy just deciding to vanish one day. A friend of mine was dating this great guy for about six months, and things seemed to be getting serious. When he disappeared, she was legitimately concerned about his wellbeing. But her concerns were abated when he butt dialed her accidentally one day, confirming that he was alive and well … he just has no desire ever to see or speak to her again.

Whenever I discuss this topic, I get a strong emotional reaction from my readers. And I fully understand it. It seems immature, it seems childish, and it’s just so disrespectful. And how can you not take it personally? He didn’t even care about you enough to tell you he no longer wants to see you? So was the whole relationship just a lie, did he never care to begin with? why guys ghost?

You feel like a fool; you feel hurt, you feel embarrassed, you feel angry, you have all the bad kinds of feelings, and it’s awful.

So let’s talk about how to make the experience slightly less awful. I’ll try to give you some perspective on why guys “ghost” and how you can move on without feeling bitter and jaded.

Read The Pros and Cons of Marrying Him, According To His Zodiac Sign

Before I tell you how to get over being ghosted, I’m going to share the real reasons guys ghost, not the reasons you’ve convinced yourself of that usually put the blame on you, or on the fact that all men are evil scumbags.

I want to preface this by saying I’m not justifying or excusing the behaviour. I’m not saying it’s the right thing to do or a nice thing to do. I’m just telling you the plain facts.

1. He doesn’t want to have the uncomfortable breakup conversation.

Does anyone ever really want to have this conversation? It’s the worst. Let’s flip things for a minute and see it from a guy’s side through a woman’s eyes if that makes sense.

So I went on a few dates with a guy we’ll call Dan, and I just wasn’t feeling it at all. And of course, whenever that happens, it means the guy is totally feeling it. I knew he would call or text at any moment to ask me out again and my stomach was in knots. I was desperately hoping he would ghost on me so that I wouldn’t have to have this conversation.

I didn’t want to hurt him. I knew he’d been hurt badly in the past and now I would just be another reason for him to not trust women and to keep himself guarded. I actually got excited when a day past without me hearing from him. Maybe he lost interest!! Yes!!! But I wasn’t off the hook, and of course, he called instead to texting to ask me out again so now I’d have to hear his pain on the other end, ugh!