8 Reasons Why You Should Forgive The People Who Hurt You 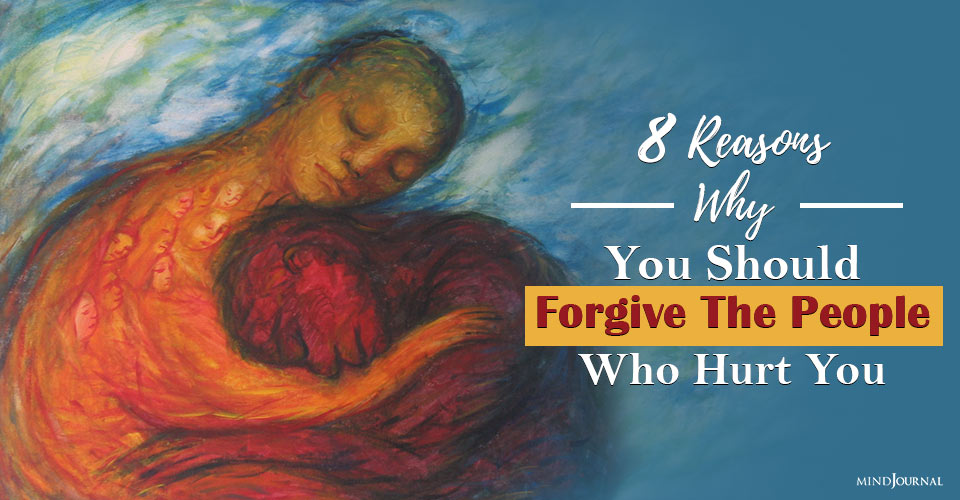 When you find yourself having trouble forgiving someone, think about all those beautiful and emotionally liberating reasons to forgive. Forgiveness is an important virtue to have, and it may not be easy at times, but if you want peace of mind and contentment in your heart, forgiveness is the way to go.

Forgiveness within psychology is relatively new, having emerged as a research focus in the later 1980s (Enright, Santos, & Al-Mabuk, 1989).

Over the next three decades, a host of studies have emerged within the mental health professions showing that Forgiveness Therapy is beneficial for the client, for the one who forgives (Baskin & Enright, 2004; Wade et al., 2014). We have to be careful with these findings primarily because a false conclusion could emerge:

Forgiveness is only for, or primarily for, the one who forgives; it has little to do with the one forgiven. This, actually, does not seem to be the case. A reflection on what forgiveness accomplishes, its purpose or goal, suggests at least eight purposes to forgiving.

Related: Understanding The 4 Stages Of Forgiveness

What does it mean to forgive? Although there may be different behaviors across the wide variety of cultures to express forgiveness, in its universal essence, forgiveness can be defined as a moral virtue, centered on goodness, that occurs in the context of being treated unfairly by others.

The one who then chooses to forgive deliberately tries to eliminate resentment and to offer the goodness of some kind towards the offending person, whether this is kindness, respect, generosity, or even love. The one who forgives does not automatically go back into a dangerous relationship.

The forgiver can forgive and then not reconcile. The forgiver does not excuse the unfair behavior but offers goodness in the face of unfairness. The forgiver should not think in “either/or” terms, either forgiving and abandoning a quest for justice, or seeking justice alone without forgiving. The two moral virtues of forgiveness and justice can and should be applied together.

With this understanding in place, here are at least eight reasons to forgive. Which of these are in your conscious awareness when you offer this virtue to those who have wronged you?

When I forgive, I do so:

2. To repair relationships as it helps me to see the other’s worth.

3. To grow in character because it can help me to become a better person.

4. To be of assistance, within reason, toward the one who acted unjustly. Forgiveness extends the hand of friendship even though the other may reject this.

5. To help me to assist other family members to see that forgiveness is a path to peace. Forgiveness for peace, in other words, can be passed through the generations.

6. To motivate me to contribute to a better world as anger does not dominate.

7. To help me to more consistently live out my own philosophy of life or faith tradition if that worldview honors forgiveness.

8. To exercise goodness as an end in and of itself regardless of how others react to my offer of forgiving.

Related: 4 Simple Tips To Practice Forgiveness and 4 Ways To Go About It

To forgive is to exercise goodness even toward those who are not good to you. Forgiveness is perhaps the most heroic of all of the moral virtues (such as justice, patience, and kindness, for example). I say it is heroic because which other moral virtue concerns the offer of goodness, through one’s own pain, toward the one who caused that pain? Do you see this—the heroic nature of forgiving—as you extend it to others?

To learn more about the scientifically proven power of forgiveness and forgiveness education programs for children in more than 30 countries around the world, visit the International Forgiveness Institute.

Dr. Robert Enright is the unquestioned pioneer in the scientific study of forgiveness. He has been called "the forgiveness trailblazer" by Time magazine and is often introduced as "the father of forgiveness research" because of his 25-year academic commitment to researching and implementing forgiveness programs. He is the co-founder of the International Forgiveness Institute, a not-for-profit organization dedicated to the dissemination of knowledge about forgiveness and community renewal through forgiveness. He is also a licensed psychologist. For his work in the peace movement, He now has been working in Forgiveness for 36 years. Dr. Enright was named a 2006 Paul Harris Fellow by Rotary International. In 2007, he received UW-Madison's highest award--the Hilldale Award for "excellence in teaching, research, and service." He holds the Aristotelian Professorship in Forgiveness Science at the University of Wisconsin-Madison. He also received the 2008-2009 Dick Ringler Distinguished Peace Educator Award from the Wisconsin Institute for Peace and Conflict Studies.View Author posts